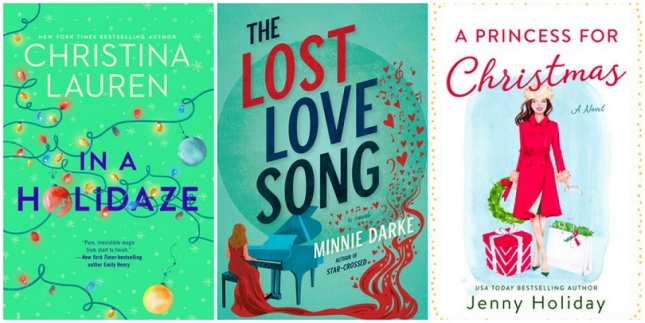 Okay, I admit it, I started putting up my holiday decorations on November 1st. Yes, it’s early (for me). And no, I don’t really care. In a year of sadness and uncertainty, I’m all about embracing whatever brings me a little joy.

And, along with twinkle lights and Christmas music, what is bringing me all kinds of joy right now is reflecting on the fantastic romantic fiction I’ve had the opportunity to read this year — and the books I’m looking forward to in the coming year. Here are a few of my favorites this month. I hope they bring you joy, too.

Writing duo Christina Hobbs and Lauren Billings are back with a new Christina Lauren novel, In a Holidaze (Gallery), that strikes the perfect balance of sweet, sizzle, and snark.

From her living situation to her dead-end job, Maelyn Jones’ life isn’t what she’d like it to be. It doesn’t help that she’s had a longtime crush on family friend Andrew Hollis that she hasn’t ever been able to confess — and now she’s made a horrible mistake with his brother, Theo.

The only good thing in Maelyn’s life right now is the annual holiday trip she takes with her family to the Park City, Utah, cabin owned by Andrew and Theo’s parents. And it’s the last year that all of them will be getting together because the Hollises are selling the place.

Sad to see their holiday tradition coming to an end and frustrated with the state of her life, Maelyn makes a wish to find what will make her happy. She awakes from a car accident to find herself on an airplane back to Utah, destined to repeat the holiday week all over again. Will she be able to confess her feelings to Andrew? Can she save the cabin and their family traditions? Will she get things right this time and find happiness? As she starts the week over again and again, Maelyn learns more about herself and what true love is all about.

This fun, quirky “Groundhog Day”-like tale is filled with everything I’ve come to love about a Christina Lauren novel: a relatable protagonist going through real-life experiences (well, with the exception of the time-travel element in this case), a delightful cast of secondary characters, and an ending that delivers the happy-ever-after without being overly saccharine.

Minnie Darke’s The Lost Love Song (Ballantine) is a poignant story about love, loss, and the enduring power of music. When concert pianist and composer Diana Clare dies in a plane crash on the way home to Australia, she leaves behind one last song. She was headed back to her longtime fiancé, computer genius Arie Johnson, with the intention to accept the marriage proposal he extended over four years previous. The last song she wrote was for Arie — a song he never got to hear her play.

Diana’s song, a testament to the love she shared with Arie, is passed from musician to musician, becoming the catalyst for healing damaged relationships and broken hearts. Over time, it travels around the world, from Singapore to Edinburgh to Vancouver, changing the lives it touches and leaving a musical ripple effect in its wake. Eventually, wandering poet Evie Greenlees encounters the song in Scotland and brings it back home to Melbourne, where she becomes Arie’s neighbor and friend.

Arie and Evie’s relationship unfolds in unexpectedly lovely and tender ways. Arie is still grieving his lost love, while Evie’s life has been a series of missed opportunities and unfulfilled dreams. These two wounded souls find a connection in the song Diana left behind — but can their newfound bond grow to include a chance at lasting love?

Darke’s poignant tale brings both tears and joy, weaving together the lives of strangers in a beautiful, musical tapestry. The Lost Love Song is a note-perfect love story that is all heart and soul.

Jenny Holiday’s A Princess for Christmas (Avon) is part Hallmark movie and part “Sex and the City,” with plenty of heat, humor, and holiday cheer. Leo Ricci is an overworked good guy from the Bronx who has a lot on his plate. Since the death of their parents, Leo has worked several jobs, including driving a cab, in order to take care of his younger sister, Gabby. The last thing he needs is the complication of becoming involved with a real European princess. But when Gabby convinces him to stop for the beautiful woman hailing a taxi, Leo finds himself pulled into a fairytale he could never have imagined.

Since her mother’s death and her father’s ensuing depression, Princess Marie of Eldovia has had to take the lead in looking out for her small country. Headstrong and determined to save her family’s watch business, she’s in New York to network with buyers and hopefully boost Eldovia’s economic situation. She flags down a cab when her driving service is a no-show and is so intrigued by Leo’s gruff, old-fashioned charm that she asks him to be her driver for the duration of her visit.

Leo and Marie live completely different lives, but they’ve both experienced profound loss and the overwhelming burden of responsibility. They bond over common ground, and their newfound friendship segues into an attraction neither of them wants to deny. When Marie returns to Eldovia, she invites Leo and Gabby to visit — which gives Leo a chance to see Marie’s world the way she has seen his. Of course, it will take a Christmas miracle to bring their two worlds together…but anything is possible when love is part of the equation.