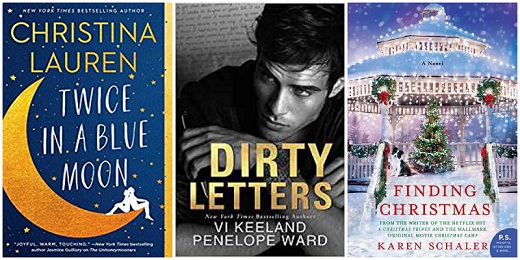 The Hallmark Channel has already begun the countdown to Christmas, which means the holidays are just around the corner — whether I’m ready or not. (I’m not.) This year, like most years, I will be gifting books to my friends and loved ones, including some of the terrific romance novels I’ve read in 2019. Here are a few of my favorites this month, including a charming Christmas-themed read that, no kidding, has me eager for the first snow of the season!

Authors Christina Hobbs and Lauren Billings, writing under the pen name Christina Lauren, have built a reputation for delivering consistently well-crafted stories and complex, layered characters. The writing duo is back with Twice in a Blue Moon (Gallery Books), which has earned a place on my keeper shelf for featuring one of my all-time-favorite tropes — the second-chance romance.

It was love at first sight for Tate Butler when she met Sam Brandis on a trip to London. Tate fell hard and fast — and revealed her deepest secret: that she is the long-lost daughter of a Hollywood movie star. Sam proceeded to betray Tate in the worst possible way, breaking her heart and shattering her world.

Ten years later, the pair have reconnected on a movie set, with Sam as the screenwriter and Tate in the leading role. A lot has changed in the years since they first met, and there is still an attraction between the two. But Sam’s previous betrayal and Tate’s doubt need to be resolved before they can move forward.

Twice in a Blue Moon has a thoughtful, expansive plot that explores the bonds, and baggage, of family and the promise of lasting love rising from the ashes of past hurts. This is a really special story by a gifted writing team.

Next up this month is another talented duo who put their own unique spin on a clever plot. Vi Keeland and Penelope Ward have written a sizzling romance for those of us who can recall the anticipation and excitement of receiving real letters in the mail from faraway pen pals. (Mine lived in Australia.)

Years later, Luca is a successful novelist living with anxiety and agoraphobia when she receives a letter from an angry and hurt Griffin, who has become a well-known rocker under a different name. They renew their correspondence, which soon sparks a sexy, flirty banter that becomes increasingly intimate.

Despite their intellectual attraction, Luca and Griffin each have secrets that create obstacles to their happiness. Keeland and Ward do a lovely job of crafting the developing relationship — and Griffin is a swoon-worthy hero who is willing to do whatever it takes to woo the woman he loves. While the premise seems a bit farfetched, Dirty Letters is an entertaining page-turner that made me wonder whatever happened to my pen pal from Down Under.

I know, I know: It’s too early to think about Christmas! But Karen Schaler’s Finding Christmas (William Morrow) reads like the script of one of my favorite holiday movies. It’s irresistible! Schaler is a screenwriter who has written Christmas tales for both Netflix and Hallmark, and she knows how to craft a magical story with all the tinsel and trimmings.

Emmie Sanders runs a community center and really loves Christmas. She plans a vacation to the adorable town of Christmas Point and sets up an elaborate scavenger hunt for her attorney-boyfriend, Grant. At the end of the hunt, Grant is supposed to arrive in Christmas Point and spend a romantic holiday with Emmie. But Grant isn’t particularly holiday-spirited — and he’s too busy to join Emmie and share in her favorite Yuletide traditions.

Enter Sam Riley, a mystery writer going through a bad bout of writer’s block. He mistakenly follows the clues intended for Grant, thinking his agent is trying to jumpstart his creativity. When the clues take him to Emmie, he’s immediately smitten — but what about Grant? Soon, Emmie and Sam are enjoying her holiday plans and experiencing all the magic of the season.

While I’m usually reluctant to dip into a novel with a Christmas tree on the cover until after I’ve finished my Thanksgiving turkey, I couldn’t resist this tale of finding true love during the most wonderful time of the year. Against an enchanting backdrop, Emmie and Sam discover they perfectly complement each other. Could it be love?

Romance readers know what to expect from this sweet tale, but that in no way detracts from it. In fact, it only made me turn the pages faster. It’s a story about finding love, yes, but it’s also about sharing the spirit of the season with the ones we love. Finding Christmas left me with a smile on my face and a song in my heart — a Christmas carol, of course.

Kristina Wright lives in Virginia with her husband, their two sons, a dog, a 6-month-old puppy, a cat, and a parrot. She’s the digital editor of Your Teen Magazine and a regular contributor to BookBub. Her work has appeared in a variety of publications, including the Washington Post, USA Today, Cosmopolitan, and more. Find her on Twitter at @kristinawright.