My year as writer-in-residence at the Hemingway Birthplace Home. 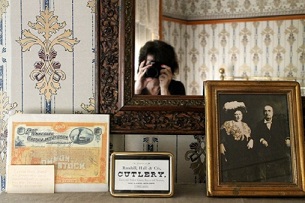 There is this vision of the writer quietly working away. With a charming private studio like I had in the attic of the Hemingway Birthplace Home in Oak Park, Illinois, one expects that a residency mainly is about just that: quietly working away at that great safari-style leather-topped desk.

To some degree, it certainly was, and whenever I am asked what I did there, part of me feels like saying, “I wrote!” I am a writer, so I wrote. However, I can quietly work away pretty much anywhere. I need only my laptop; sometimes, pen and notepad suffice. And it turned out that my stint as writer-in-residence was not about quietly working way; instead, it was a surprisingly social function.

It meant being out there as a writer, sharing whatever I could share, and trying to graciously create a community around the experience. This began with an interview request from my neighborhood newspaper, the Hyde Park Herald, right after the Hemingway Foundation of Oak Park announced my residency.

I discovered that people do read the local paper, because for a while I couldn’t go to the drugstore or supermarket without risking that someone would holler from another aisle, “So, how’s that Hemingway gig going?” or “Shouldn’t you be in Oak Park writing?” A highlight was when my husband was asked what it felt like to be the husband of the “famous writer.” 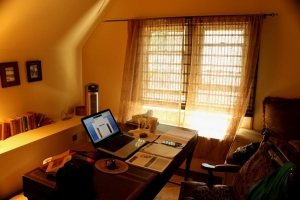 Serving as writer-in-residence meant that everyone in my life, as well as strangers, wanted to visit me in the Hemingway House. For the most part, I truly enjoyed hosting visitors (family, friends, and fellow writers) and showing them around (I picked up information from the wonderful volunteer tour guides), but I did have to guard my schedule, or my residency would have morphed into one social gathering or tour after another.

It was important to me that children get exposed to Hemingway and this great resource Chicago has in his birthplace home, so I invited three third-grade classes from my children’s former elementary school to come on a field trip. This was a bit of a risk, as Hemingway is not a children’s writer, and the teachers, tour guides, and I worried that the kids might find a house tour boring.

We shouldn’t have. It was a thrill to see how much the kids were into this old house. They loved all the “old stuff,” the telephone you can crank, the pull-chain on the toilet, the swivel chair on the kitchen sink. 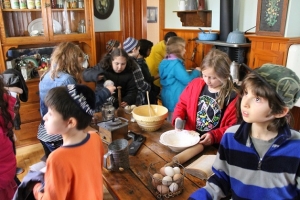 The monthly memoir workshop I teach at StoryStudio Chicago also came for a field trip, and we held class in the dining room (because I hadn’t yet learned how to turn up the dimmer in the parlor). A group of writer friends came for a picnic in Hemingway’s attic — a truly moveable feast!

Last but not least, I taught a memoir class at the house to benefit the Hemingway Foundation in February and March. It was a beautiful experience. I met some talented writers from the neighborhood, and we read, wrote, and discussed memoir right there in the Hemingway parlor with the fire crackling and snow falling outside. What a setting!

Having 91-year-old Ginny Cassin, who oversaw the restoration of the house in the ‘90s, as a student in this class was a special honor, and guiding her to write about her grandfather was probably the greatest success of my time as writer-in-residence.

However, now that it’s been a few months since my residency ended, I know that I miss the actual house the most. My social circle grew as a result of my residency, and that doesn’t go away, but “living” in this Victorian house where Hemingway spent the first six years of his life was a truly once-in-a-lifetime experience. 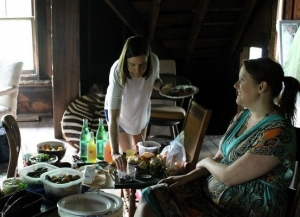 I loved the house’s atmosphere of bygone days. It is set up as if the original inhabitants had just left; in the beginning, I felt like Goldilocks poking about in someone else’s home. I loved having the house to myself in the mornings (tours only operate in the afternoons). Having the peace and quiet to absorb its atmosphere is not something you usually get to do in a museum. (In the photo at left: A moveable feast in Hemingway’s attic with writer friends Kelley Clink (left), author of A Different Kind of Same, and Gillian Marchenko, author of Sun Shine Down; both books first saw the light of day in my memoir class at StoryStudio, and I am immensely proud of that.)

And who gets to live in a museum anyway? Sit on the couch? Turn on the fireplace, pull up an armchair? Every morning when I arrived and turned the key in the back door, I stepped back in time, and every time I climbed the attic stairs, I was charmed by the Bohemian setting of my studio under the dormers — draft, heat, and all. 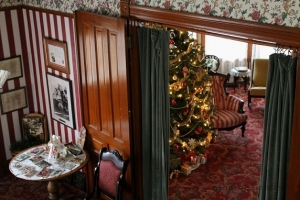