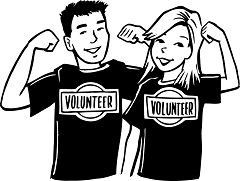 If you’ve spent more than 20 seconds on the Independent’s website in the last month or two, you may have noticed that our sixth annual Washington Writers Conference is coming up next week. (We tend to mention it. Frequently.)

The Independent is a nest of book lovers, both from the reading end and, often, from the writing end. (A number of our folks offer serious authorial cred, like immediate past president David O. Stewart, whose Impeached was a clue on “Jeopardy” last year.*) As nonprofits, both the Independent and the conference rely heavily on volunteers.

One of those volunteer positions is conference chair, and this is the second year I’ve served in that alternately exciting and nerve-wracking role. As I noted in my last column, I am not normally a joiner, and yet here I am doing some heavy lifting in the participation department.

Why? you might ask (and, believe me, I’ll be asking myself that question around 3 a.m. on conference day). The answer is that I am a firm believer in writers — and readers — getting out and participating in the writing community as a way of making opportunities for themselves. Contributing with a spirit of generosity and supportiveness has a way of opening doors.

There are few successful DC-based authors more generous with their time than Alice McDermott, winner of the National Book Award. She teaches at Johns Hopkins, is on the board of the Writer’s Center, and is happy to contribute a large chunk of her afternoon to be with us next Saturday to share her writing wisdom. She models what “giving back” looks like.

She has also long been one of my favorite writers. For the Independent, I had the pleasure of reviewing her latest novel, The Ninth Hour, and I’ll be introducing her when she is
“in conversation with” Get Lit, D.C.’s Tayla Burney. As I mentioned on the conference Facebook page, I hope that my fan-girling doesn’t embarrass all concerned.

It’s worth noting that every one of our panelists and speakers at the conference is volunteering her or his time, from McDermott to veteran broadcaster Bob Schieffer, to Brookings Institute senior fellow/syndicated columnist/Georgetown University professor E.J. Dionne. That’s some major firepower aimed at supporting fellow authors along their writing path.

The Washington Writers’ Publishing House is likewise all about establishing a supportive community of local writers. They exclusively publish winners of their annual fiction and poetry contests, and previous winners then help to coordinate the next contests and shepherd winners through the publication process. Their entire model is built on the concept of community-building and giving back so that others can experience that same success.

I mention all of this because WWPH’s 2016-2017 fiction winner, Jacob Weber, will be at the conference discussing the journey to publication of his short-story collection, Don’t Wait to Be Called.

Examples of supportive volunteerism abound within the Independent’s ranks, too, like longtime contributor Ed Aymar, who will be on our “Writing a Page-Turner” panel. Ed is heavily involved with the International Thriller Writers, most especially in their “the Thrill Begins” program to support debut thriller writers. He also coordinates regular Noir at the Bar events in DC and elsewhere, gathering local noir writers to read their work in the dark, noisy, alcohol-soaked environments that infuse their stories.

I started volunteering for the Independent after the 2014 conference, beginning as an assignment editor (matching reviewers with books), then reviewing books and later writing this column, then helping out with the conference, then becoming chair. All of those roles opened doors for me that I would not have experienced otherwise. (Plus, it gets me quoted on Lit Hub and in the industry blurbs on Amazon. Sorry, that’s just cool.)

When I conduct workshops at conferences — which I was not yet doing when I volunteered in 2014 — I use my experience at the Independent as an example of how participating in the writing community pays dividends. Not the least of those dividends is the building of your own network of supporters who will celebrate your successes, expand your horizons, and open up ever more opportunities.

As the clock ticks down to conference day, I admit that the time involved is interfering with my writing schedule, and I look forward to getting back to the Year of Writing starting May 6th. But I also look forward to the infusion of energy that the Washington Writers Conference engenders; in last year’s conference video, Stewart likens it to being near a nuclear reactor.

That energy comes from reconnecting with friends from earlier conferences, making new ones, meeting and hearing from some of our favorite authors, and possibly clicking with the agent we’ve been searching for.

There are infinite ways for writers to engage with the community. Look around and find the one or two that resonate most with you, because enjoying the experience is crucial to making it a success for you and those you’ll be working with. While you’re looking around, you might want to look here.

See you at the conference!

[*Editor’s note: We’ve been looking for a way to mention this fun fact ever since. Thanks, Jenny!]

Jennifer Bort Yacovissi’s debut novel, Up the Hill to Home, tells the story of four generations of a family in Washington, DC, from the Civil War to the Great Depression. Jenny is a member of PEN/America and the National Book Critics Circle, and writes a monthly column and reviews regularly for the Independent. She is chair of the 2018 Washington Writers Conference and president of the Annapolis chapter of the Maryland Writers’ Association.