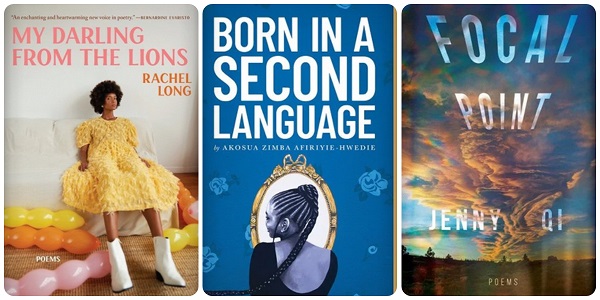 Here we arrive at late October, these days of thinning veils, witches, and ghosts. This is a month made for poets, as words are our spells, our offerings. In my home state of New Mexico, October is when we build ofrendas with pictures, food, and flowers, and tell stories to honor family members who have passed in preparation for Dia de los Muertos at the beginning of November.

According to Felina Rodriguez of Teaching With Corazón, Dia de los Muertos is the ancestral Mexica tradition of Mikailhuitl, pre-dating the Aztec empire and correlating to the Monarch butterfly migrations from North to South America, the butterflies believed to be the return of our ancestors’ souls.

I hunt these stories constantly, thankful they are easier to find with the internet and social media, because I need to taste my own Indigenous, European, and African ancestors’ languages, stories, gods, and traditions and to know that my family is with me — both colonizers and colonized — and to learn from them. Grief holds no borders, but neither should belonging.

Likewise, the three collections in this month’s roundup are powerful altars in their own right, each holding its own recollections, spells, and incantations honoring of lands, language, and family.

In London-native Rachel Long’s debut collection, My Darling from the Lions (Tin House), we are treated to a rich yet sometimes deeply sinister look at all stages of the restriction and resistance of feminine desire, expanding against the conservative confines of religion, adolescence, being mixed race, the immigrant-mother/daughter dynamic, and hair, to name a few.

In “8,” Long breaks down the self-destructive yearning to be white, or whiter, winding a breathless, broken-up poetic form around Psalm 51:7, “Purge me with hyssop, and I shall be clean: wash me, and I shall be whiter than snow.” The poet unspools a childhood memory full of hopscotch and Mary Janes into a disturbing incident between herself and a religious authority figure, and her mother’s refusal to hear the truth from her daughter.

A section of the book called “A Lineage of Wigs” holds the heart of the collection, with poems dedicated to the importance, history, and stigma of Black women’s hair, their rituals, and struggles, especially from a speaker whose parents are of different races. Poems such as “Communion” and “Jail Letter” detail the painstaking, sometimes literally painful time spent on doing hair that is nevertheless ostracized by society.

We also peek into the mother’s Christianity intertwined with traditional African beliefs brought over from the old country and manifested as what those who aren’t familiar might call superstitions. But to many people, witches and hexes are as real as church pews and hold a wealth of ancestral history. “Divine Healing” breaks open the stark reality of these fears as the speaker’s mother has been supernaturally attacked with another’s cancer and must counter it with a defensive ritual:

“For seven days and seven nights, she lay in the rain
of the elders’ ceaseless prayers. She’d forgotten the language
of her girlhood, but there, on the floor, remembered”

Akosua Zimba Afiriyie-Hwedie’s chapbook-length collection, Born in a Second Language (Button Poetry), is an innovative exploration of identity using language as both entry point and barrier. The speaker in these poems is a young African immigrant who seeks to hold onto her homeland and history through the preservation of her family’s native language, though the expectation of assimilation pounds at her from all sides. In “Eli, Eli, lama sabachthani?” the speaker asks:

Afiriyie-Hwedie gently plays with form and spacing as a way to subvert traditional American and English poetry, but the prose poem is used most, which works well as the whole is ultimately a narrative of immigration and resisting colonization. Her consistent use of traditional African languages is instructive and belies an emotional intensity and fear that these languages may disappear from the speaker’s life without her consent.

In “I am deciding which language to spend the night in,” Afiriyie-Hwedie writes, “I don’t want to choose a mouth tonight” as a metaphor of English and Nyanja as an outfit to take on or off. And in “Call me by my name,” the speaker says, “When my mother sends for me/in my Twi name. I measure how far I am from myself./By what language I use to respond.”

We come to the most literal of griefs in Focal Point (Steel Toe Books), Jenny Qi’s elegy from a daughter to the mother she lost to cancer. The poignancy comes with a sharpness as the speaker is also a cancer researcher who must reckon with the self-imposed knife of not being able to save her parent.

The book’s opening poem, “Point at Which Parallel Waves Converge & From Which Diverge,” lays the daughter’s heartbreak bare as she’s surrounded by death in the hospital where her mother struggles to live and also surrounded by hundreds of tiny deaths in her lab. Qi writes:

“nights at a microscope in a dark room
where the lights turn off after ten,

sitting too still, turning a knob just so to focus
on the right field of cells; the eight hundred mice

While the collection is peppered with poems dealing with racism, sexuality, romantic relationships, and even some striking modern reinterpretations of Greek myths — such as in “Circe in the Mirror” — it is Qi’s speaker’s familial relationships and her relationship to the body that carefully hold the book together.

The parents are immigrants, and the father’s scant interactions with his children are strained, fraught with toxic male culture in poems such as “How Men Deal”: “like my father said I guess you just/a child cant let go of what’s past.”

In “Normal,” as the stress of caretaking and then losing her mother sends the speaker into the hospital with pneumonia and a final acceptance, Qi writes, “Mama, I finally get it,/why those surgeries broke you./Why you were so cross about living/even as you did everything to live.”

A monthly feature that looks at books of and about poetry

The Poet and Her Poems

An appreciation of Grace Cavalieri’s new collection, With.