Notes on a Scandal

A look at The Nixon Defense: What He Knew and When He Knew It by John W. Dean

Watergate changed politics and journalism in Washington, DC, certainly — and probably beyond. And John Dean was a key witness in the bringing down of President Richard Nixon, along with the infamous White House tapes that provided the final, fatal wound.

Billed as “the authoritative account” of the Watergate scandal by his publisher, in The Nixon Defense, Dean collects, catalogs, and analyzes the White House tapes — nearly a thousand recordings recently released by the National Archives and Records Administration. These new records allow readers to eavesdrop on the president’s Oval Office conversations with his inner circle of assistants and advisors about the arrest, cover-up, and strategies to deflect his responsibility for the notorious break-in.

For the record, I know John Dean, represented Leonard Garment, worked with Henry Peterson at the Department of Justice, produced a documentary on Sam Ervin, and knew and had incidental relationships with many of the players in the Watergate affair. But one couldn’t be a lawyer and a writer in Washington in those days without having contact with that consuming event.

Dean’s new book (he wrote three others on Watergate) was published in August 2014, the 40th anniversary of Nixon’s resignation in disgrace. It focuses on — to paraphrase the now classic comment of the late Senator Howard Baker — what Nixon knew and when he knew it. 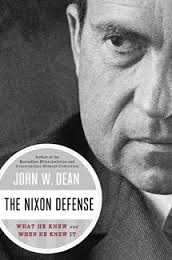 Dean’s conclusions are no real surprise, though he painstakingly analyzes new records to prove them. Nixon contrived his defense soon after the break-in. He relied on his two top aides, H.R. Haldeman and John Ehrlichman, for eight months for information as the case untangled (they lied to him about their personal involvements).

The president was personally involved in the phony cover-up story and the fundraising for the defense of the defendants. For those who were around during the Watergate events, Dean’s book will be like offering drugs to an old druggie. Thought you knew it all? Look at these new insider details! Ever fascinating.

Particularly interesting, though not decisive, is Dean’s analysis of the 18-and-a-half-minute gap in the White House tapes. His encyclopedic examination of the details surrounding the testimony of Rose Mary Woods, Nixon’s secretary, about the gap in the infamous June 20, 1972, tape of Nixon’s conversation with Haldeman concludes in a stand-off. It could not have been Woods’ error in hitting the “record” button instead of the “off” button, as she suggested, later technical experts concluded.

So who did the erasing, and what was erased?

Dean believes the gap erased conversations that provided direct proof of Nixon’s involvement in the cover-up — a logical conclusion, but speculative. He suggests a list of who might have excised the missing material, but concedes he can’t prove who it was. This is one question we may never have answered. Maybe it was Oswald.

Dean’s descriptions of the overheard strategies concerning the whole Watergate affair that preoccupied the White House for years, as much as whether to destroy incriminating White House tapes, or to withhold them for what turned out to be specious executive privilege claims, are fascinating.

As he concludes his description of that episode: “His tapes provide overwhelming evidence that he was involved in the cover-up from the earliest stages.” Nixon’s note at the time proved prescient: “Should have destroyed the tapes.”

Dean’s conclusion: “Had he done so, his presidency and its history would have ended differently.”

We don’t have Nixon to kick around anymore, alas. He’s been replaced, and cable television multiplies the echo chamber.

My Most Touching Fee

The Right to Write