Guess whose Manhattan home is now a Starbucks? 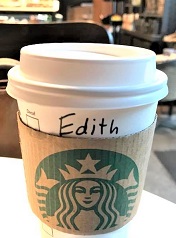 In The Age of Innocence — Edith Wharton’s 1921 Pulitzer Prize-winning novel I scavenged at a Little Free Library though I already owned three copies — the city of Baltimore is mentioned six times.

In the references, Wharton makes clear that the Queen City of the Patapsco is a fine and proper place for the best people, the kind among whom she was raised and later skewered for their flaws, foibles, and failures.

From chapter six of Innocence: “The Dagonets were a considerable clan, allied to the best names in Baltimore and Philadelphia.”

That 19th-century Mobtown was part of a triangle of capital “S” society cities was oddly stimulating given the decades of abuse Baltimoreans have lavished on their hometown and one another.

It was a Baltimore known for terrapin soup, handsome bridal suites, fine silver, and scions of the Baltimore & Ohio Railroad, a town so alien to the working-class version in which I came of age that I’d never seen vestiges of it up close. Only in books.

Though I’d long carried a torch for Lily Bart (and known suburban versions of her), I only immersed myself in the life and work of Wharton in the wake of that Little Free Library find. (Used books remain the best bargain in America; hardly anybody really wants them.)

To get closer to Wharton’s world 81 years after her death, I made a breakfast date with an old friend from the Baltimore Sun, one of the old-school-newspaper sticklers who steered the night ship when I worked rewrite; a man a generation older than me whose family is deeply rooted in the lost world of propriety.

“My family were snobs,” he said over coffee and a soft-boiled egg. “They were very religious people who looked down their noses on people who made a big deal of society.”

Yet, by all virtually all measures, they were members of that gilded “tribe,” as Wharton called the select society she knew. One of things my friend shares with the author — along with a rarified family tree — is an ancestor who’d been a general in the American Revolution.

In 1877, Edith Newbold Jones, then 15, visited Washington to view a painting of General Ebenezer Stevens, her great-grandfather. Stevens appears (faintly) in Trumbull’s “The Surrender of Lord Cornwallis."

My host — fonder of English detective novels than the drawing-room intrigues of Wharton — is not sure where his patriot forebear is buried. Most likely, like the majority of his kin, it’s somewhere in Baltimore.

On the same afternoon as my breakfast surrounded by portraits of old Baltimore families, I took a train to New York and stayed in a hotel on Washington Square, the capital of Old New York.

In Wharton’s 1913 novel, The Custom of the Country, the square is home to a damned and delusional man named Ralph Marvell, said to be based on the more tragic person of Edgar Allan Poe, whom Wharton admired and name-dropped in Innocence.

Looking around the neighborhood, Marvell describes it as home to “vanishing denizens of the American continent doomed to rapid extinction.” His own is recorded by book’s end.

From Washington Square, it is a mile north to West 23rd Street — once considered the northern boundary of “fashionable” New York — where Wharton was born on January 24, 1862. In Innocence, Central Park is considered to be in the wild.

Beginning at Waverly Place, I walked up Fifth Avenue, along which Society established households as Manhattan grew. Taking a right at 23rd Street, I began counting down building numbers, searching for No. 14.

And there I found a small plaque reading: “This was the childhood home of Edith Jones Wharton, one of America's most important authors…”

The marker was affixed to a Starbucks.

Rafael Alvarez can be reached via maconstreetbooks.com.