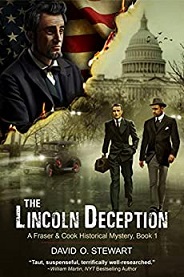 There’s a dirty secret about writing history: Most of history is silence, which can make the job of writing nonfiction history pretty challenging. That silence, however, also paves the road to historical fiction. At least, it did for me.

I was researching a book on the impeachment of President Andrew Johnson and turned up a surprising tale about Congressman John Bingham of Ohio, who had led the impeachment and also had prosecuted John Wilkes Booth’s co-conspirators in 1865.

Thirty-five years later, on his deathbed, Bingham told his doctor that, during the Booth case, he learned a terrible secret about the Lincoln assassination that could destroy the republic. Bingham vowed to take the secret to his grave. Then he did.

So I took another look at the Lincoln killing at Ford’s Theatre, which occurred 155 years ago today. Booth was a lone madman who woke up one morning and decided to kill a great man, right? Like Lee Harvey Oswald and Sirhan Sirhan. That’s the story. But the facts don’t line up with the story.

For most of the year before the assassination, Booth had no visible source of income, yet lived very well. Who paid his bills? Similarly unemployed were some of nearly a dozen others who joined or assisted his scheme to kill the president, the vice president, two cabinet members, and the army’s general-in-chief. Speaking of which, it took time to recruit all those co-conspirators and hatch a plot to use them.

Then, after shooting Lincoln, Booth eluded thousands of pursuers for nearly two weeks, helped by Confederate spies and agents throughout southern Maryland. None of this felt like a crackpot scheme put together by a delusional, unemployed actor. Maybe Bingham did know a secret.

But after months of digging, I couldn’t identify Bingham’s secret. It involved, after all, a murderous conspiracy, which is the sort of information that people intend to keep secret. Frustrated, I resolved to explore through fiction the central question: What secret about the assassination might have destroyed the republic? That brought forth my novel The Lincoln Deception and persuaded me that fiction is a powerful tool for exploring what historical research so often encounters: Silence.

The silence can be near-total for those who left few records of their lives because they were poor, or uneducated, or female. Indeed, Jean Auel’s wildly popular “Earth’s Children” novels portray life among the Cro-Magnon and Neanderthals, about which (pretty much by definition) no written records exist.

Fiction allows the blending of known facts with a writer’s vision to embroider a compelling portrait of a person, whether real or (in Auel’s books) an imagined prototype, about whom very little can be known directly.

In Girl With a Pearl Earring, Tracy Chevalier illuminated the life of a young serving woman of the 17th century, clothing her with hopes and insights that made a distant era tangible. The experience of American slavery has been recreated by great writers like Ernest Gaines (The Autobiography of Miss Jane Pittman), Toni Morrison (Beloved), and Edward P. Jones (The Known World).

Yet many silences surround even well-known figures, silences that fiction writers can explore in meaningful ways. In The Daughter of Time, published nearly 70 years ago, Josephine Tey challenged Shakespeare’s portrait of Richard III as irredeemably evil, absolving the last York king of murders that history had long laid at his feet. Hilary Mantel’s ambitious trilogy has largely rehabilitated Thomas Cromwell, previously dismissed by many as one of Henry VIII’s pimps and errand-runners.

Even Abraham Lincoln, about whom at least 15,000 books have been published, presents long silences for novelists to explore. In his recent Courting Mr. Lincoln, Louis Bayard depicts the continuing mystery of Lincoln’s marriage to Mary Todd.

Lincoln’s complexity — mingling gloom, wit, empathy, depression, and brilliance — would have been a challenge for any intimate partner, but the tempestuous Mary has often been portrayed as equal parts harridan and emotional albatross around the poor man’s neck. Bayard deftly enters the silence of their intimacy and courtship, imagining the strength, political savvy, and understanding that Mary may have brought to their marriage and political partnership.

When I first sought a publisher for The Lincoln Deception, the first nibble included the (I now know) routine question: Will this be a series? As my then-agent succinctly explained, there is only one answer to that question. Accordingly, I wrote two sequels. Silences in history are easy to find.

The first sequel, which will reissue in late June as The Paris Deception, confronted two enveloping silences at the Paris Peace Conference of 1919, which concluded World War I. First came the dodgy health of President Woodrow Wilson, who at times hosted negotiations from his bed (no Zoom then). Did Wilson suffer from a mild bout of the Spanish Flu (the official story) or from a stroke that presaged his near-total collapse months later? Silence.

Then there was the pivotal moment when the Socialist-led German cabinet refused to sign the peace treaty offered by the victorious allies. Literally overnight, much of that cabinet was replaced. The new ministers dutifully signed the treaty. Was there foreign involvement in that episode of regime change at warp speed? Silence.

The third book in the series, which will reissue in the autumn, turns to Babe Ruth’s first two years with the New York Yankees, 1920 and 1921, when the Babe transformed baseball with electrifying home runs and magically became the era’s greatest celebrity. That book plunges into the silence surrounding Ruth’s intriguing connections with the gambling underworld and the Black Sox Scandal of 1919.

In each of the episodes I have explored, the lure of historical silence grows sharper because it was intentional. There was something to be concealed, whether it was the true nature of an assassination conspiracy, the health of the president, a governmental reversal, or the criminal connections of a giant celebrity.

David O. Stewart writes fiction and nonfiction books based in American history. His historical mysteries, the Fraser/Cook Series, are reissuing this year.