Pulling back the curtain on DC-based Barrelhouse Books 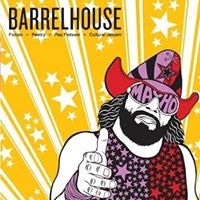 Barrelhouse magazine, which has grown to be a major presence on the literary scene over the past decade, was intended to bridge “the gap between serious art and pop culture.” Ten years on, the mission hasn’t changed.

“We’re looking for writing that engages with the world right now,” says Barrelhouse poetry editor Dan Brady. “We’re not too interested in classical allusions or stuffiness. We want art that is equally comfortable name-dropping Flannery O’Conner and Kanye West. I do think that there’s a certain sense of, not nostalgia, per se, but fond regret, maybe, in much of what we publish. There’s an appreciation for and critique of the past, both personal and cultural, that usually strikes a chord with us.”

As the magazine gained traction and stability, Brady says it was a next logical step to start publishing books. And while there is a shared aesthetic between the magazine and the press, Barrelhouse Books does not draw its selection criteria too rigidly to the magazine’s pop-culture sensibilities.

“For the books, I think we’re less concerned with the material being tied to pop culture and more interested in work that just feels like right now,” he says. “Writing about pop culture directly is very difficult to do well. Pop culture changes all the time, as do people’s attitudes towards any particular TV show, movie, or musician.

“Working in print, there’s a real danger of being outmoded the instant you put pen to paper (or fingertip to keyboard). The best pop-culture-related writing uses popular media to reveal something deeply personal. After all, pop culture is art, and art is trying to tell us something about ourselves.”

While the press has only put out three books so far (with a fourth in the pipeline), Barrelhouse Books has proven its willingness to produce an interesting and eclectic slate. After their first book, a compilation of pop-culture essays from the magazine, the press released Lee Klein’s Thanks and Sorry and Good Luck, a “memoir in rejection letters” that were written by Klein during his time as editor of Eyeshot magazine.

Barrelhouse’s other two books — Justin Marks’ You’re Going To Miss Me When You’re Bored and the forthcoming darryl hall is my boyfriend by Erica Lewis — are both poetry collections that are “modern day interrogations of the self through pop culture and contemporary living.”

“We approach the magazine as its own community of writers which we work to foster,” Brady says. “The press is much more intimate. That’s family. We spend a lot of time with our authors. We try to care for them, provide the best opportunities we can, make sure they’re growing through the experience. We’re in it together.”

The Barrelhouse team backs up its rhetoric about community and family with a full slate of other projects that help writers grow and succeed. They’re a primary force behind the Connections and Conversations writing conferences that have been held in DC, Philadelphia, and Pittsburgh, as well as hosted a variety of online workshops for writers. Barrelhouse also participates in events like the Indie Lit City Summit in DC, a gathering where local writers, editors, and reading-series coordinators share experiences.

“The best publicity comes from just being a part of the small press literary community,” Brady says. “If you’re out there helping others as much as you’re promoting your own work, then you’ll pretty naturally find your audience. It’s really just about talking to people as people, saying, ‘Hey, we just put out this book you might like, and here’s why.’”

But, in the end, the main focus at Barrelhouse will always be the writers and their work.

“The most rewarding thing is getting to work with the poets and writers we publish,” Brady says. “These are writers we have great admiration for, even if we’ve just discovered them through open submissions.

“Reading their work and being able to bring it to other readers makes this whole thing worthwhile. We’re nothing without the writers who trust us with their poems, stories, and essays. Getting to publish their work is the reward.”

Michael Landweber is the author of We, a novel. His short stories have appeared in a variety of places, including Gargoyle, Fourteen Hills, Fugue, American Literary Review and Pank. He is an associate editor at the Potomac Review.