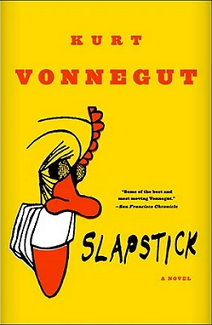 When Kurt Vonnegut’s eighth novel, Slapstick was published in 1976, most reviewers hated it. Roger Sale, in the New York Times, called it “flashy, clever, and empty,” chiding Vonnegut for his formulaic writing, dumb notions, and sentimental cynicism. In the New York Review of Books, James Wolcott deemed it “a thin stream of fey wisecracks…turning the end of the world into a lazy, stoned sermonette.”

Even Vonnegut himself showed little affection for the novel, giving it a lowly “D” in a self-assessment included in 1981’s Palm Sunday and admitting, in the Paris Review, that “Slapstick may be a very bad book. Everybody else writes lousy books, so why shouldn’t I?”

Despite its failings, the key to Slapstick’s value is its subtitle, “Lonesome No More!” Throughout the 1970s, Vonnegut used interviews to discuss a “longing for community” and to decry the isolation of American life, telling Playboy, “We’re lonesome. We don’t have enough friends and relatives anymore.” In Slapstick, he offered a solution: a Utopian scheme for reorganizing America into thousands of artificial extended families.

The novel’s narrator is Dr. Wilbur Daffodil-11 Swain, scion of a wealthy family and twin brother to Eliza Mellon Swain. Born with physical deformities described as “neanderthaloid,” the Swain twins are considered “monsters” with no intelligence and are expected to die before age 14.

Though they speak in monosyllabic nonsense words and act like drooling infants even as teens, Wilbur and Eliza achieve genius when their oversized heads touch. Eventually, their parents separate them, privileging Wilbur with a Harvard education while Eliza remains an outcast. Much of the novel traces Wilbur’s longing for the sister he desperately misses, much as Vonnegut missed his own sister, Alice, who died of cancer at age 41.

Toward the novel’s end, Wilbur and Eliza, temporarily reunited, outline their plan for the government to create extended families by assigning everyone a new middle name at random. (Welcome to a world of Chipmunk-17s and Daffodil-11s.) The ideal extended family, Wilbur explains, “should give proportional representation to all sorts of Americans, according to their numbers.”

Running for president while sporting campaign pins proclaiming, “Lonesome No More,” Wilbur envisions a society where everyone has 10,000 siblings and 190,000 cousins. Addressing a potential voter, he argues that “we need all the relatives we can get in a country as big and clumsy as ours.”

Vonnegut’s concern with fragmentation and social isolation was longstanding. “People don’t live in communities permanently anymore. But they should: Communities are very comforting to human beings,” he wrote in Playboy, describing a community of unemployed mine workers who refused to leave their Pennsylvania town despite their vanishing jobs.

“They’re not going to leave and go to San Diego and builds ships and airplanes. They’re going to stay in Pennsylvania, because that’s home. And that’s intelligent. People should have homes.”

Vonnegut continued: “Until recent times, human beings usually had a permanent community of relatives. They had dozens of homes to go to.” According to the author, when people wonder where “the old values” have gone, it’s “a yearning for family connection, the need for community, to feel part of something bigger than oneself.” His study of anthropology at the University of Chicago opened his eyes to the cohesiveness of folk societies held together by strong personal relations.

Though written nearly 50 years ago, Vonnegut’s diagnosis of the troubled American psyche seems more astute than ever. In a pre-pandemic survey of 10,000 adult Americans conducted by Cigna, more than 60 percent reported feeling lonely. Men responded as being lonely slightly more than women, and the results were consistent across the generations, with Gen Z having the highest average score on the UCLA Loneliness Scale. Nearly one in four reported poor mental health.

According to the survey, people feel left out, isolated from others, and like they’re lacking meaningful relationships. Nearly half reported that they no longer felt close to anyone. While it may be too soon to measure fully the ramifications of social distancing and quarantine on the nation’s already frayed social bonds, all reports indicate rampant loneliness, isolation, and declining mental health, particularly among the young. U.S. Surgeon General Vivek Murthy has called the problem an “epidemic.”

“We have big holes in our social fabric,” writes Richard Weissbourd, senior lecturer at Harvard and the lead author of a report on loneliness in America. Weissbourd’s comments fit perfectly with Wilbur Swain’s campaign mantra in Slapstick. Vonnegut, plagued by loneliness despite wealth and worldwide fame, imagined the cure as a return to the large, extended family of his childhood.

If the rootlessness and hyper-individuality of the current age makes authentic connection fleeting and hard to find, Vonnegut’s scheme creates connections whether the individual wants them or not. Longtime Vonnegut scholar Jerome Klinkowitz described Slapstick’s lengthy prologue as Vonnegut daydreaming “a novel about how families do a better job of caring for people than do governments.”

While Vonnegut’s views on extended families are nostalgic and warm, there is some evidence that larger families are happier in general, with a 2015 Australian study finding that families with four or more children enjoy the greatest life satisfaction based on the criteria of resilience, social support, and self-esteem.

Slapstick may be, in Vonnegut’s words, his “worst book,” but in giving voice to the loneliness at the sad heart of America, he offers readers the temporary solace of connection with the extended family of fellow readers and with Vonnegut himself, the author’s concern for his readers’ loneliness evident throughout.

Commenting on his vision of extended families in a 1973 interview, Vonnegut said, “It’s a sunny little dream I have of a happier mankind. I couldn’t survive my own pessimism if I didn’t have some kind of sunny little dream.”

Chuck Augello is the author of The Revolving Heart, a Best Books of 2020 selection by Kirkus Reviews. He publishes The Daily Vonnegut, a website exploring the life and art of Kurt Vonnegut. His novel A Better Heart will be available in November.

What happened to the human attention span?