In the Night Kitchen

Or, a date with the Perseids. 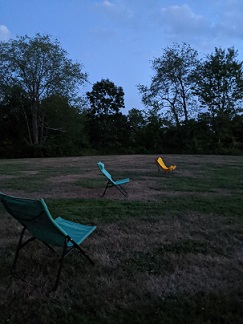 Early in August, I reached for a cookbook, The Summer Kitchen (Mrs. Appleyard’s, of course) by Louise Andrews Kent and her daughter Elizabeth Kent Gay. This book, printed in 1957, was my mom’s and has been read and used until the pages are loose in the binding. The stains are souvenirs of past meals in our family summer house in the foothills of the Alleghenies.

The Summer Kitchen is in the vein of cookbook/memoirs or culinary novels-in-stories (think Laurie Colwin). The recurrent plotline for every chapter is simple: Mrs. Appleyard, or her daughter, Cicely, is inspired to cook something, often for a casual party in their community in Vermont.

Usually, in April, Mrs. Appleyard’s chatty recipes keep me company as I open our summer house. But this pandemic year, April didn’t happen. It was August before I settled into the porch swing with Mrs. Appleyard.

Later, my neighbor down in the cove — what they call valleys in our region — invited me and my husband to socially distant tea outside, our first engagement since the world shut down in March.

We walked around her pond, admiring the birds, dragonflies, and lilies; we sat on her patio in the shade of her gloriously purple barn (Mrs. Appleyard would approve) and compared notes on the moon shadows the night before and anticipated the arrival of the Perseids, the annual August meteor shower, later in the week.

Mrs. Appleyard and Cicely are competitive stargazers and cater elaborately for these events. In one of my favorite episodes, “Appointment with Orion,” a mouthwatering middle-of-the-night picnic is consumed as the constellation appears.

Haven’t we all missed occasions? Surely it was Mrs. Appleyard who prompted me to say to my friend, “Come and watch the Perseids!” Why not step outside our present earthly reality into the pages of a favorite book, just for a bit?

My friend, a night owl and avid photographer, agreed, eager to see the stars from my ridge without interference from ambient light. As there’s no Wi-Fi, either, my husband had to return to work in the city (like the almost-invisible Mr. Appleyard). My friend asked a member of her photography club to join us. Easy for three to be socially distant in a meadow.

I made vanilla ice cream for our date with the Perseids in a wonderful machine my son gave me long after our wedding-gift White Mountain hand-crank rusted away. Not as elaborate a menu as the Appleyard picnic for their appointment with Orion, but as much as I dared in these times. I added a liberal dash of Jack Daniel’s to the cream — for its medicinal, disinfectant properties. Besides, we would be eating the ice cream at midnight, shivering.

Arranging three canvas lounge chairs at the prescribed intervals, I hung lanterns from the low branch of the walnut tree, resigned to extinguish their glow if the photographers deemed it light pollution. The expanse of rough grass where turkeys and deer meander looked like the deck of a ship about to sail. Dusk fell at the appointed hour, 9:30 p.m. All was in readiness for the photographers and the celestial, socially distant guests of honor: meteors coming to shower us from light years away

My earthly guests arrived. Alas, the photographers approved of the darkness but declared the view obstructed by the majestic walnut. So we formed a caravan, driving the ridge road to a more open spot. As we set up camp in a neighbor’s field, I called to alert her. She planned to watch from her deck “in a couple of hours.”

I am not a night owl. Ice cream and my comfortable bed called to me. This was going to be a long haul. My friend unpacked lawn chairs and tripods. She regretted not having brought a second pair of rubber boots (“against the rattlers”) for me. I tucked my feet up.

We sat in the field, far apart from each other, calling out as our cosmic visitors appeared. Not quite a shower, but over the next two hours, several dozen brilliant green and yellow meteors streamed across the bowl of the sky. My friend distributed hardboiled eggs and plums — almost a Japanese stargazing menu, but she’s French, so strong black coffee instead of tea or sake.

Even caffeinated, I dozed as clouds began to roll in. Shortly after midnight, we drove back along the ridge.

The photographers were too tired to stop for ice cream, but I did my due diligence on a bowlful, telling Mrs. Appleyard and Cicely about the meteors. And I made a note in the cookbook of my most important discovery: a dash of Jack Daniel’s in the mix keeps homemade ice cream very scoop-able, even after curing in the freezer for several hours during an appointment with the Perseids.

Ellen Prentiss Campbell’s new collection of love stories is Known By Heart. Her story collection Contents Under Pressure was nominated for the National Book Award, and her debut novel, The Bowl with Gold Seams, won the Indy Excellence Award for Historical Fiction. For many years, Campbell practiced psychotherapy. She lives in Washington, DC, and is at work on another novel.

A Stitch? In Time.

On the slow, methodical progress of sweaters and stories.