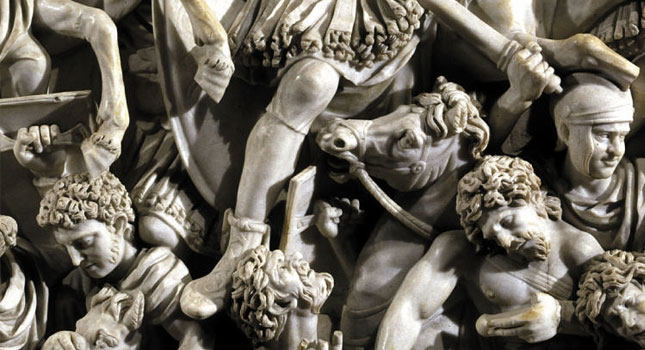 The collapse of the Roman Empire was a major calamity of Western civilization. Why the Roman world of surpassing organization succumbed to unlettered tribes and its cities of extraordinary temples, palaces, and aqueducts devolved to the decrepit homes of goat herders and bandits has been a question for centuries.

Stimulated by a visit to Rome’s ruins, 36-year-old Edward Gibbon set out to write a History of the Decline and Fall of the Roman Empire. More than a million words and 38 chapters later, in 1781, he finished. Or not, because in the next year he took up the story from the second sack of Rome in 472 to the fall of the Roman Empire in the East (Constantinople’s empire) a millennium later in 1453. He completed this concluding portion of Decline and Fall in 1788, a mere seven years later. The 22-year publishing history makes Gibbon a contemporary of Adam Smith, Samuel Johnson and James Boswell.

Gibbon’s production was a success from the start, as noted by British historian Hugh Trevor-Roper in his introduction to the three-volume Everyman Library (Knopf) edition of 1993. Decline and Fall sold briskly, not least for Gibbon’s mellifluous compositional style. Gibbon was also praised for his scholarship, as well as for his scope of inquiry and attitude toward his subject.

From that day to this, Gibbon’s work has been a bulwark of English prose, an exemplar to subsequent writers of history, notably Winston Churchill, who took the man and his style to heart. Reading Gibbon’s great work is not only mainly a pleasure but it also hones the reader’s vocabulary (e.g., asseveration, prolix, simony, haruspex and salubrious).

Gibbon’s scholarship, according to Trevor-Roper, also holds up well (though the Everyman Library edition points out the occasional error) for no small reason than that Gibbon’s knowledge was so vast and that he approached his work so assiduously from original sources that his recitation of events — and most of his interpretations — cannot be challenged even by modern historians armed with expansive research capabilities. A kind of 18th-century one-man Will and Ariel Durant, Gibbon discoursed on much, including Roman institutions, customs of the various barbarian peoples, and philosophical debates among early Christians so that readers receive a broad history of social movements between the Atlantic and the Indus during the third, fourth and fifth centuries. The cast of characters is immense: from degenerate Commodus and heroic Zenobia to rapacious Attila. Also, according to Trevor-Roper, Gibbon, in keeping with the Enlightenment, broke with past historical writing, spurning the history-by-Providence school as well as the one proposing history to be too complex for understanding or interpretation.

Gibbon wrote for the educated. Without a touch of irony or apology many of his footnotes quote original sources in Latin and Greek with no attempt to translate, Gibbon assuming his readers readily understood these ancient languages. The footnotes are notorious in themselves, composing roughly one-sixth of the opus and containing much of the celebrated Gibbon irony, sarcasm, wit — and salacious material. For example, at one point in the text Gibbon notes a certain Proculus for his energy “in the combats of Venus,” for which the footnote reads: “A very surprising instance is recorded of the prowess of Proculus. He had taken one hundred Sarmatian virgins. The rest of the story we must relate in his own language,” whereupon Gibbon presents Latin text by the chronicler Vopiscus. Accordingly, and even if you cannot fathom Latin or Greek, a reading of Gibbon is best accomplished with the footnotes on text pages, not as endnotes as is the form in the Great Books series, or eliminated altogether as in the abridgement accomplished under the direction of Daniel Boorstin for Modern Library in 2003. Similar advice favors reading Gibbon rather than listening to a recorded version that skips the footnotes entirely, though the Blackstone Audiobook recording by Bernard Mayes is otherwise magisterial.

Gibbon was not without his critics; they were many and fierce. Mainly this owed to Gibbon’s infamous chapters 15 and 16, both addressing the rise of nascent Christianity and its effect on the Empire. Gibbon, a deist in an age of fashionable deism, posits that Christianity helped undermine the Empire. He proposed that third- through fifth-century Christians cared less for the earthly kingdom than the one to come, rotting any dedication to the kind of civic virtue that had forged the Republic and early Empire. British clergy so denounced this thesis that Gibbon reluctantly halted his major work to publish A Vindication of Some Passages in the Fifteenth and Sixteenth Chapters. By this short book Gibbon virtually silenced the critics with his scholarship and evidence — though others subsequently have argued that Christianity lengthened the Empire rather than shortened it.

Gibbon’s long work is a tragic drama of how and why a magnificent civilization — unrivaled in architecture, letters, water supply, sanitation, science, military discipline and laws — could succumb to illiterate hut-builders. Fledgling Christianity was only one factor that Gibbon submits. Others he proposes are the surrender of self-government to despots; the decline of public spirit and public virtue; and the erosion of martial ardor. Others implied are an inadequate system for choosing emperors; foolish, self-indulgent or libidinous leaders; ruinous civil wars; and injustice of the rich inflicted upon the people that “confiscated their goods and tortured their persons [and] compelled the [people] to prefer the more simple tyranny of the barbarians. …” One might also infer the fecundity of barbarian women and the rise of eunuchs to the courts of Roman emperors. Successive writers expanded on these. Toynbee and Burke emphasized the defects of a plunder economy, Tainter an inability to solve complexities, and Heather the rise of the Sassanid Persian Empire, while others piled on theories about lead poisoning, environmental decay and plagues.

Of course, the world of the fifth century was not the world of Julius Caesar. The Empire that fell to the various Gothic tribes in the mid-400s was Christian, as were the Goths. When Rome was sacked, the Empire’s capital had already been shifted by Constantine to Constantinople, and even in Italy the capital was Milan, not Rome. And one can wonder whether on account of the outlawing of paganism in 391 the Roman Empire had not already expired; or that on account of Emperor Theodosius’ order of the Massacre of Thessalonica in 390 whether the Dark Ages had not already begun.

Not the least pleasure of reading Gibbon is discovering his aphorisms. Examples are “As long as mankind shall continue to bestow more liberal applause on their destroyers than on their benefactors, the thirst of military glory will ever be the vice of the most exalted characters”; “[the barbarians’] poverty secured their freedom, since our desires and our possessions are the strongest fetters of despotism”; “the power of instruction is seldom of much efficacy, except in those happy dispositions where it is almost superfluous” and “[t]he various modes of worship . . . in the [pagan] Roman world were all considered by the people as equally true, by the philosopher as equally false, and by the magistrate as equally useful.” The text is peppered with many such.

Like a huge ship-of-the-line, Gibbon’s great work has sailed the literary oceans of two centuries, safeguarding English, declaiming a rational perception of human history and dispensing wisdoms. Expect it to be sailing those oceans long after we are gone.

Brooke C. Stoddard, formerly of Time-Life Books and National Geographic Traveler Books, is a full-time writer and editor living in Alexandria. He is the author of World in the Balance: The Perilous Months of June-October 1940.