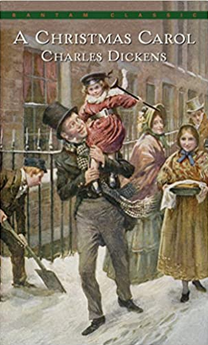 Charles Dickens’ 1843 novella, A Christmas Carol, is an enchanted book. I mean enchanted in the original sense of the word, as in “placed under a spell; bewitched.” (Though I would also agree it’s “filled with delight; charmed.”) For if not through the magic of an enchanter, how else could Dickens condense his bursting, mythic profusion to 100 pages?

Ebenezer Scrooge, the book’s parsimonious antihero, is surprised on Christmas morning to find his otherworldly journey has taken place in the space of a single night. This experience is passed to the reader, who can scan the book in one sitting yet must confront, along with Scrooge, the whole ontological roster: spirituality and humanism, mortality, ethics, wealth, Hell, relationships, memory, horror, and joy, to say nothing of the structure by which the story combines All Souls with Christmas. If it should feel natural to us today that ghosts and Christmas go together, we’ve certainly got Mr. Dickens to thank.

As the story swings open, we meet Scrooge (“scraping, clutching, covetous old sinner”) at his counting-house on Christmas Eve. By way of characterization, we’re informed he’s unaffected by extreme turns in weather, and it becomes apparent through Dickens’ exposition that “No wind that blew was bitterer than he.” Scrooge is harsher than nature.

In fact, Scrooge is inarticulate and without identity: in a word, insensate. “What reason have you to be morose?” asks Fred, Scrooge’s nephew. Here, Scrooge holds back his best lines about prisons and Union workhouses — they will come later — and answers his nephew with his famous unintelligible grunt, “Bah,” then, thinking better of it, adds, “Humbug!”

Before Fred’s visit, we’re given another interesting piece of information about Scrooge’s lack in the sense-of-self department. His partner, Jacob Marley, has been dead seven years. Scrooge has never painted over Marley’s name on the warehouse door. It’s not grief that stops him but indifference; he answers to both names interchangeably. Scrooge or Marley, “it was all the same to him.”

With all this perceptual vagueness, it’s little surprise Scrooge’s first words to the ghost of Marley are, “I won’t believe it.” His second utterance, laughably, is “Who are you?” — farcical because Scrooge spends half the prior page thinking Marley’s appearance is unchanged from when he was alive, save for the bandage around his chin.

But Marley’s ghost also speaks in bad faith when it asks, “Why do you doubt your senses?” Marley knows perfectly well why Scrooge doubts his senses: Scrooge has willfully dulled those senses to the bare minimum. That’s the purpose of Marley’s visit. He returns from the dead and beckons the three ghosts of Christmas to treat Scrooge to a sensual awakening.

The process isn’t pleasant, at least not at first.

Scrooge is already changed by his visit from Marley and wakes up to the Ghost of Christmas Past in the dark and fog and cold, feeling vulnerable to the elements for the first time in years. Appearing with the spirit at his former school, Scrooge is overcome:

“He was conscious of a thousand odours floating in the air, each one connected with a thousand thoughts, and hopes, and joys, and cares long, long forgotten!”

The spirit fully restores Scrooge’s ability to “see” by illuminating various episodes from his past — boarding school, a reunion with his sister, a Christmas dance at work, and finally, the breakup scene with his former fiancée, Belle. “I cannot bear it!” pleads Scrooge before wrestling with the spirit in a scene that recalls Jacob from the Book of Genesis.

The second spirit, the Ghost of Christmas Present, dashes in as a much-needed salve, with his heaping feast and his torch of charity. How could anyone not be struck by the “Spanish onions shining in the fatness of their growth” or the “blooming pyramids” of ripe fruits? Or Mrs. Cratchit, the wife of Scrooge’s sole employee, “brave in ribbons” as she goes about preparing a scant Christmas meal for her struggling family?

With the second ghost, Scrooge begins to feel his emotions again. Later, he gets so caught up watching his nephew’s festivities that he plays along with the party’s guessing game, forgetting they can’t see him, forgetting himself altogether in a moment of giddy abandon — the present (moment), indeed.

Perhaps sensuality is a curious message as far as Christian teachings go, and we might safely say Dickens was more humanist than Christian, just as we can profess our own celebrations (for the most part) are more pagan than Biblical. Then again, maybe there’s a lesson there about the dangers of becoming overly estranged from the embodied experience. Maybe to downplay our own incarnate state, with its many plights and pleasures, is to risk forgetting how and why we’re all connected.

At least, this is what Scrooge comes to learn from the Ghost of Christmas Yet to Come. As they flit from one mean and ominous scenario to another — the solitary corpse on a bed shorn of its curtains — Scrooge is finally obliged to know the truth about himself, which is best summed up in Rainer Maria Rilke’s 1918 poem “Archaic Torso of Apollo”: “You must change your life.”

Dorothy Reno is the author of an essay on the books of Viet Thanh Nguyen, “Lonely Ghosts: Absence as Somethingness in the Works of Viet Thanh Nguyen,” as well as the co-creator of its visual companion piece, Lonely Ghosts: Absence and Somethingness. You can join Dorothy in reading Middlemarch, which will be the subject of her next column on March 21, 2022.

The tangling of philosophy and religion in Crime and Punishment.