A call for an Affordable Justice Act.

Foreign judges regularly visit the U.S. Supreme Court. On one such occasion, a guest asked then-Associate Justice Anthony Kennedy, as he accompanied him on a tour of the premises, the source of the words “Equal Justice Under Law.” Those high-minded words were engraved into the spandrel at the front of the building. Kennedy said he didn’t know but had his law clerks research the source. 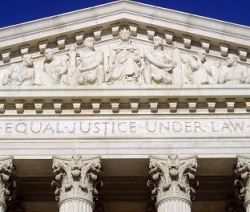 Turns out, they weren’t jurisprudential profundities from ancient legal treatises, nor excerpts from scholarly writings. Kennedy learned that, in 1932, Cass Gilbert and two of his assistants, while working as architects of the new building, had to come up with a noble-sounding phrase appropriate to the mission of the court, and Gilbert decided to use “Equal Justice Under Law.” He alone came up with the words which were apt and conveniently fit in the available space.

Those words are indeed appropriate and have been repeated endlessly in cases and commentaries to the present time to describe our system of justice. But, sadly, they have nothing to do with our present justice system, which treats rich and poor people, Black and white, differently.

The legal profession and all its practitioners — law schools, bar associations, judges, police, prosecutors, and media — know of these disparities. Only when all these institutions of justice combine to bridge the chasmic differences which define what rich and poor people experience in the legal system will the “equal justice” carved on the Supreme Court building and intoned by commentators for centuries become a reality.

Today, more accurate words would be “Justice for Sale.”

In the late 20th and early 21st centuries, legal scholars described the disparities in our justice system, so they should not be a secret. About 70 years ago, University of Michigan law professor Yale Kamisar used a graphic metaphor to describe the realities of the criminal justice system. He wrote pungently about “the manor houses of justice” (courtrooms and classrooms) and compared them to “the gatehouses” (police stations, jails, and the streets).

The late Stanford law professor Herbert Packer wrote about what he labeled two models of the criminal process: the due-process and crime-control models. Rich defendants receive the former (the criminal goes free because the constable has blundered, and it is better that 100 guilty defendants go free than one innocent one is convicted). Poor defendants suffer the latter (I am choking, stop and frisk, and plea bargaining).

A young reformer and author, Alec Karakatsanis, recently questioned why our modern legal system is “profoundly unjust.” He asked why “we advertise the law with beautiful inscriptions on our public monuments or lofty words in judicial opinions taught in law schools…and then crush poor people and people of color in our streets, our prisons, and our courtrooms?”

A cynical critic of the Securities and Exchange Commission suggested that we police the ground floors but never the penthouses — a similar premise as Kamisar’s and Packer’s — explaining why corporate criminals rarely go to prison or even to trial.

The reality of our civil and criminal justice systems, insiders know, is that there is a yawning gap between justice for poor Americans and that for our middle and upper classes. Stanford law professor Deborah Rhode has written that, in the U.S., “over 4/5 of the legal needs of the poor are unmet and half of the legal needs of people of modest means are estimated to be unmet.” Fifteen percent of rural American cities have NO lawyers, even for people who might afford them.

Civil legal aid and criminal public defenders, who represent 80 percent of poor clients, are overworked, out-staffed, and underfunded to meet the challenges of the few well-paid lawyers retained by wealthy clients who can pay up to (or more than) $1,000 an hour.

A major study reported that each legal aid attorney serves a potential client base of 6,415 people, compared to private attorneys, who serve a client base of 429 people. The U.S. ranks 99th among developed countries in affordable access to civil justice. One in five Americans (60 million people) qualifies for free legal aid. Half are turned away for lack of resources.

There are about 1.4 million licensed attorneys in the U.S., according to the American Bar Association. About 75 percent are in private practice; the rest work in government or private industry. Only 1 percent of them provide legal aid in civil matters or are public defenders in criminal cases. They are the chief public source for funding legal services to the poor.

A recent head of the Legal Services Corporation — an outgrowth of the Office of Economic Opportunity in the LBJ era — was quoted saying that our country spends about $385 million for legal assistance annually to the poor, compared to the $350 million paid by private citizens for their pets’ Halloween costumes! Pro bono work by private lawyers helps fill some of the gaps, but overall, the average time lawyers provide such work is half an hour a week, Professor Rhode reported.

The legal profession and our state and national governments have failed the public while creating what one critic called an “empire of law.” Most lawyers licensed to practice only do so for those who can pay what are unreachable fees for most. What corporate polluter, pharmaceutical-opioid manufacturer, or government defender of torture ever went without legal help, or to prison, or screamed to a policeman, “I can’t breathe”?

Courts have held that corporations are fictions and, as a result, their officers rarely are prosecuted like people. But corporations are treated as individuals for First Amendment purposes in freedom of speech (Citizens United) and religion (Hobby Lobby) cases. Last, courts provide “qualified immunity” to police and prosecutors for their misconduct in most cases. Most “police” themselves.

While the Constitution guarantees the right to counsel in criminal cases, 97 percent of these cases are plea bargained, tried by neither judges nor juries. In these negotiations, prosecutors have all the power and use it. Public legal aid in civil cases and public defenders in criminal cases are understaffed and out-funded compared to their prosecutorial counterparts.

According to retired California judge and former head of legal services Earl Johnson, the author of a three-volume study of civil legal aid in the U.S.:

“No subject has had more attention in recent years than the disparity between rich and poor Americans in their access to health care insurance. Even after the passage of the Affordable Care Act a decade ago, about 20 percent of our population still has no health care coverage. By comparison, we offer $1 billion for public funding of civil legal aid compared to $351 billion for nationwide health care. The United Sates spends on justice for the poor less than one-third of 1 percent compared to $7,000 per eligible patient.

“If the solution to uniform health care scandal still eludes the richest country in the world, consider the status of legal assistance in the United States. The recent data indicates that only a small fraction — less than 15 percent — of low-income Americans have adequate — or any — legal representation for civil issues.”

It is time for an Affordable Justice Act! One hopes developing one doesn’t take as long as it did — and continues to do — for healthcare.

Ronald Goldfarb, a prosecutor in the RFK Justice Department, is a Washington, DC, attorney, author, and literary agent. His newest (15th) book, The Price of Justice, was published last month.

My vacation reads weren’t serious, but they were seriously good.

Mystery at the Archives

Could punctuation have altered the Declaration of Independence?