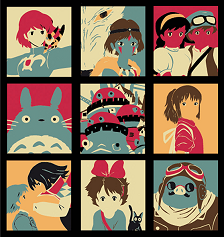 One of the pandemic rituals my spouse took up was rewarding herself once a month by purchasing a Studio Ghibli film. Even though most of the catalog is available via HBO Max, she wanted to own the discs and have the freedom to watch at her leisure.

She began with all the films directed by Hayao Miyazaki, moved to the ones directed by his son, and lastly to those by other directors. The film she most recently bought was “Grave of the Fireflies,” written and directed by the late Isao Takahata.

I’d been speaking to her about this film for many years, both because I’d taught it in a class on anime at the University of Baltimore and because watching it is a visceral emotional experience. Loosely based on real events and adapted from a short story by Akiyuki Nosaka, it follows the harrowing journey of two orphaned siblings trying to survive the final days of World War II in rural Japan.

To say that this 1985 film is heartbreaking is the greatest of understatements. It has all the grace and beauty in its animation that viewers are familiar with from other Studio Ghibli films, like “Spirited Away” or “Howl’s Moving Castle.” But this one is starkly clear about the tragedies of war, poverty, and society’s indifference to those who are struggling.

While in other animated films we see the power of imagination and love to overcome obstacles, here we witness the gut-wrenching limitations of the imagination. I won’t spoil anything, but bring a whole box of tissues to the couch if you sit down to watch this one.

“Grave of the Fireflies” is often listed among the greatest war films of all time. Recently, Walter Chaw, on an episode of NPR’s Pop Culture Happy Hour, called it instead “the greatest anti-war film of all time.”

After my spouse watched it, I asked her whether she thought folks at her job (she works in refugee resettlement for an NGO based here in Baltimore) would be interested in seeing the film, maybe in a kind of workshop or discussion-group format. She said she wasn’t sure, but that they’d never used a fictional film in that way (documentaries, yes).

The whole thing led me to think about ways that anime could be used to lead folks toward vibrant discussions of real-world topics outside the realm of a classroom. While I’m often focused here in “Nerd Volta” on the ways nerdy things can teach creative writers, I forget that the visual lyricism of animation has a broad ability to circumvent our cynicism.

With that in mind, here are three anime recommendations that could be used to generate vibrant discussions even in the workplace:

“Haikyu!!” The story of a boys’ high school volleyball team. While it follows many of the conventions of sports anime (hidden potential, training, defeat, redemption), the show does a really great job of developing and discussing the evolving roles of individuals on a team. Volleyball, after all, is a sport where you must rely heavily on others. No one player could receive, set, and spike all on their own.

“Yuri on Ice.” One of the most beautifully animated shows — with a great opening theme song called “History Maker” by Dean Fujioka — this tells the story of a young Japanese figure skater, Yuri, and the bond he forms with his trainer. As with ballet dancers, the timespan when skaters are in their prime is extremely short, and so the show ultimately speaks to aging. I love watching it as commentary on the reframing of missed opportunities and the deconstructing of what we mean by wasted potential.

“Fruits Basket.” This slice-of-life comedy with a bit of fantasy is a great show for exploring the difficulties of being kind in a cruel world. The protagonist is Tohru Honda — a girl whose mother has just passed away — who meets the Soma family, some of whose members transform into animals from the Chinese zodiac whenever they are hugged by someone of a different gender. While this leads to some slapstick instances, the show is actually about moving beyond loneliness and offers some surprisingly dramatic and heartfelt moments.

How to Write a Nerdy Poem

After “Assumptions” by Richard Hugo.