An Interview with Sarah MacLean

The novelist talks Hell’s Belles, the essence of romance, and giving her heroines agency. 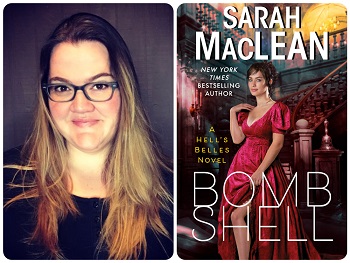 New York Times bestselling romance author Sarah MacLean is a widely sought-after, knowledgeable, and noteworthy proponent of the romance genre in mainstream and social media. Bombshell, the first in her Hell’s Belles series, was one of the most anticipated romance releases of this past summer.

What’s the story behind the Hell’s Belles series?

I conceived of Hell’s Belles several years ago while I was working on my last series, The Bareknuckle Bastards. That series follows a group of siblings who run a smuggling ring in Victorian London, and while I was writing them dominating the rooftops and dark corners of London, I realized that my next series would have to turn toward the powerful women beyond the ballrooms of London. During my research, I stumbled across a story about the Forty Elephants — the largest shoplifting ring in English history — staffed entirely by women. And the Hell’s Belles were born, not as shoplifters, but as women with a keen sense of justice and a sharp understanding of how to use their quiet power to make a loud impact. I wrote Bombshell during the pandemic, under lockdown in New York City, alone in my office and far away from my friends. Thus, the book was a love letter to a rich community of women who laugh, love, and support each other.

How did your Bostonian hero and owner of the Bell in Hand, Caleb Calhoun, come about? And fans have been champing at the bit for his and Sesily Talbot’s story. Why was now the right time for it?

I grew up and went to college in New England and to graduate school in Boston, so I think I’ve always had an American hero in me. Caleb was the perfect addition to MacLeaniverse, brought into it as the business partner to the heroine of my book The Day of the Duchess, who left England for America to escape a broken marriage. Of course, in that book, he was blindsided by his partner’s beautiful bombshell of a sister, Sesily...and readers knew they were watching the start of something great. It took a few years to get there, but Bombshell is a gift to those readers and was a real joy to write.

Do you work with a germ of a plot, a single character, or an idea when you start a book?

Historical romance is a genre full of extra people doing really wonderful extra things, and so, for me, the books begin with the characters. I love digging deep into a character’s past, their present, their goals and motivations. And once I have one character, I build the second one, taking the advice of well-known author Sandra Brown, “If your hero is a firefighter, your heroine had better be an arsonist!” The plot comes from there: How to keep these two on the page together? After that, the work is to richly people the world — leaving readers with the sense that if they followed any particular character off the page, they would walk directly into another book and another fascinating story.

How did you get into romance writing?

I’ve always been a romance lover — I started reading romance when I was only 10 or 11 years old — so there was never a question that if I became a writer, I wouldn’t write romances. While my first book, The Season, was a YA novel, it was a romance novel, complete with a happily ever after. After that, there was no going back — adult romance, here I come! There’s something delicious about mining emotions, about celebrating them, and about honoring them.

What is the essence of romance?

Romance is the literature of hope, of joy, and of community, and it promises all of us a happily ever after — especially those of us who do not always get a chance to see our happiness reflected on the page. In romance, we triumph. We find love. With a partner, with a family, with a community. It is the only genre that promises this as a matter of course, and therein lies its power. What’s more, romance is about seeing the truth of someone and loving them for it, and about letting someone else see you clearly enough to love you for your truth. If people get justifiably punched in the face along the way, all the better.

This is such a great question, and one that I love answering for other authors, not for myself! When I think about my own books, I think there are two core stories that I am constantly thinking about. All of my books explore heroine agency. What does it mean to have power, to hold power, to use power, to manipulate power when you are someone who is not accorded it from traditional places? At the same time, I’m fascinated by how power plays out in an equal partnership. While many think that romances are about a hero rescuing a heroine, mine are about mutual rescue, about equity and parity. In an equal partnership, love is a sharing of power.

You’ve always been a champion of romance writers through your review column for the Washington Post, your book recommendations, tweets of support, your podcast, Fated Mates, and so on. What is the impetus behind this?

Despite more than a decade of writing romance, when I consider my own identity in relationship to romance, it’s “reader first, reader always.” To that end, I’m far more interested in talking about books I love than talking about my own books. When I read a great book that makes fearless, emotional, intense choices, I want to talk about it everywhere. I want everyone to read it. I have also benefited so much from the support of magnificent authors who came before me, so not paying that support forward is not an option.

We here at the Independent love every piece we run. There are no winners or losers. Seriously, though, here are August’s winners.