An Exemplars Special for May

A look at Mayakovsky: A Biography by Bengt Jangfeldt 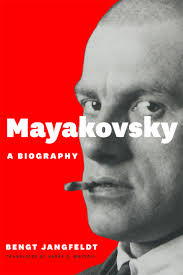 Seventeen-hundred grams of genius. That’s what Vladimir Mayakovsky’s brain weighed after his death in 1930 from a self-inflicted gunshot wound. His brain weighed 360 grams more than Lenin’s, “a bit of a headache for the ideologues of the Brain Institute.”

There’s no other chronicle of a Russian-born poet so richly detailed as Mayakovsky: A Biography (University of Chicago Press). Swedish author Bengt Jangfeldt researched materials never seen before to give a full account of the “Futurist” poet’s private life and public turmoil.

The book stayed by my fireplace most of the winter waiting for its (sometimes) five-page-a-day reading. Friends would walk in and say, “Hmm. Mayakovsky’s still here.”

The book’s fascinating, for sure, but the complexity of Russian politics before World War I is a lot to unscramble for someone who knew nothing of the power factions except the Bolsheviks — and no less complicated are the love affairs, marriages, abortions, betrayals, trysts, and suicides.

The book is a maelstrom of free love that makes Haight-Ashbury look virtuous. Jangfeldt traces all the (many) female relationships that influenced Mayakovsky’s art and life. The poet began as a lyricist, with love and idealism at the center of his work, although his poetic form was far different from classical antecedents.

He broke from tradition to create new phraseology on the page. Remember what Russian art looked like with Dadaists and deconstructionists leading the way? Americans got their first look at this new art in NYC’s 1913 Armory Show. Old molds were broken to create new forms, and this influenced the writing of American poets.

Mayakovsky entered the scene as a young art student in filthy clothes, with rotting, yellow teeth, carrying his own drinking cup because of germ phobia. From this, he rose to enter the monied class of aristocrats and artists, scrubbed up and supported, initially, by the married couple Osip and Lili Brik.

(In fact, he was the third party in this marriage — an unusual arrangement for even today’s most liberal thinkers. In a triangle, there’s always an odd man out; in this case, it was not Mayakovsky.)

Why do I speak about sexual gossip at the book’s core? Because romantic turmoil fueled the art — the source and context for Mayakovsky’s writing — even during the time he turned his work over to the state for Lenin’s approval.

Conflicts, internal and external, finally took a toll on Mayakovsky’s life, and he died at age 36. There’s conjecture that his death was a murder and not suicide; the bullet didn’t match the gun, and two shots were heard. It’s still unresolved.

Mayakovsky wanted to be a part of his country’s restoration. He wrote utilitarian poetry for “the cause,” saving his finer art for the stage, screen, and page. He was a spokesman for the Communists, spilling out propaganda and didactic materials.

We have a confounding view of a man who never actually joined the Communist Party but wanted its support, love, and protection — a friend with benefits. This sounds reductive but shows the riddle that was the man, and a metaphor to better understand his life.

He spoke at rallies and became the voice of the Revolution. He was a member of the “Left Front of the Arts,” editing its journal, LEF. Mayakovsky was a unique individualist now preaching for artists to abandon individualism to make the arts better for communism!

Although Stalin appreciated “futurism” far less than Lenin did, Mayakovsky enjoyed privileges and was allowed to travel to European countries as well as Mexico, Cuba, and the U.S. Among Mayakovsky’s books is My Discovery of America.

In 1921, Mayakovsky had an affair with the artist Liya Lavinskaya, who then gave birth to his son. The son grew up to become a sculptor of the state. In 1925, while visiting America, Mayakovsky met a Russian émigré and, after a brief affair, Elly Jones gave birth to a daughter, Patricia J. Thompson.

Thompson ultimately became a professor at Lehman College in New York City; she wrote the book Mayakovsky in Manhattan about her parents’ love affair. Thompson waited for Perestroika before revealing her identity. Her mother had kept this secret, especially after Trotsky’s murder in 1940. Emigrés had much to fear from the long arm of Soviet reprisal.

The book concludes at the Reign of Terror sweeping the Soviet Union in the mid-1930s. Socialist Realism was then the only “viable literary form.” Mayakovsky and Gorky were “its leading exponents.” Boris Pasternak survived the purges — and, thankfully, so did his Doctor Zhivago — but Soviet authorities forbade Pasternak to accept the Nobel Prize in 1958.

Joseph Brodsky is mentioned briefly; American poets regard him as a contemporary. Before immigrating to America, he spent seven years in a Soviet Labor Camp for using folkloric language rather than state-assigned rhetoric.

Jangfeldt’s Mayakovsky: A Biography is a history book with characters we care about: Anna Akhmatova, Marcel Duchamp, Maxim Gorky, Sergey Diaghilev, Osip Mendelstam, and dozens more who shaped culture under a terrifying regime. And as for the writers? Some cooperated. Others expired.

Grace Cavalieri is producer of “The Poet and the Poem from the Library of Congress.” Her latest books are The Man Who Got Away (newacademia) and The Mandate of Heaven (Bordighera).

Special edition of a monthly column reviewing recent books of poems and books about poetry.

A biography that does justice to a complex, confounding figure.