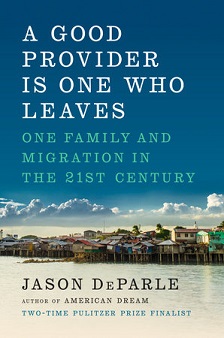 In 1987, Jason DeParle was a young reporter interested in the life of the global poor when he rented floorspace in the shanty home of Tita Comodas, a 40-year-old mother of five who lived in a Manila slum called Leveriza. DeParle remained friends with the family for the next 30 years and finally wrote a book, A Good Provider Is One Who Leaves, about their journey from the Philippines to different parts of the world and a new global middle class.

While boatloads of refugees rushing Europe across the Mediterranean and caravans of Central American migrants crossing Mexico for the United States have captured Western minds, most migration in the last half-century has been legal and sanctioned by governments via visas and guest-worker passes. Really, immigration is a form of market-based wage and skill arbitrage enabled by structural conditions of the global economy, especially the great divergence between rich and poor countries.

DeParle uses the Comodas family as an example of the power and pitfalls of the legal migration that has enabled millions of the poor from the developing world to move to higher-paying jobs in the Middle East and the West. He watched the Comodas family grow and move out of the Leveriza and then the Philippines, but made little of it until he saw a World Bank report that showed remittances from overseas workers as three times larger than what a developing country received in foreign aid.

Economic migration is a powerful instrument of global development, but the story of the Comodas family is equally one of great personal and social cost, including separated families, exploitation, bad judgment, failures, and health scares.

This book is not the first to chronicle the immigrant passage as incredible and harrowing, but DeParle’s account is remarkable for putting a woman at the center of the story. While women outnumber men in 21st-century migration statistics, men still dominate the immigrant archetype: the factory or farm worker, the cab driver, the programmer, and, belatedly, “the Mexican rapist.”

Filipina women, who quite possibly led the gender shift for other large female-emigrant countries, remained absent from the immigration story told in their own country, as Deirdre McKay observed in her 2012 book, Global Filipinos.

Colonized by the Spanish for three centuries before being ruled by the United States after victory in the Spanish-American War of 1898, the Philippines was always a great migratory nation. As a 7,600-island archipelago, the movement of peoples would have been quite common, but during World War II and the Korean and Vietnam wars, significant numbers of Filipino men fought in and with the U.S. military and received American residency in return. Filipino men also joined the merchant marine and cruise liners in large numbers.

But by the 1970s, when the Philippines’ own promise of becoming another miracle economy like Japan had faltered, Filipina women were taking domestic and caregiving jobs in Hong Kong, Singapore, and the newly burgeoning Middle East, as well as in Canada and Australia.

By 2000, more than three-quarters of Filipinos working overseas were women. An average age of 30 meant that many of them were young mothers who’d left their children behind with grandparents; these women often didn’t see their kids for years. The agony of the mother-child separation has been a central theme in Filipino national life since, but it has also meant that women themselves have downplayed their own migratory successes so as not to be judged harshly as mothers.

The book’s main protagonist is really Tita’s eldest daughter, Rosalie, whom DeParle first meets as a 15-year-old and who, through hard work and perseverance, becomes a nurse, moves to the Middle East, and, 20 years later, to Texas, where she and her family finally join the American middle class.

Through each transition, Rosalie struggles and then finds her footing and establishes not just earnings but also community. Her tenacity in studying for — and then waiting for — an American visa is breathtaking, but her successes are hardly untrammeled. In Abu Dhabi, she falls into debt despite her increased income, and her marriage nearly fails. Her American life brings its own challenges, particularly for two of her three children, who go from being obedient Filipino kids to willful American teenagers.

Throughout her life, Rosalie remains a firm link in the migration chain, bringing siblings, cousins, and even friends out of the Philippines. She keeps sending money home, becoming the “good provider” of the book’s title. And despite all the challenges, she is a good nurse, wife, mother, and Catholic.

DeParle does not dwell on the significance of women being at the center of the migration story, but it would be wrong to forgo speculation. First, such empowerment brings the prospect of big sociological changes in countries with large female emigration. The book highlights an upward skill shift from caregiving to professional nursing that can have powerful effects on families and societies. If the men are left behind, what happens?

Second, the presence of large — and often single — female populations, especially in Middle Eastern societies, is both a vulnerability to exploitation and an anachronism for local norms. Third, the picture of the “immigrant rapist” is hard to sustain when the image of the newcomer is that of someone like Rosalie.

No contemporary book on immigration can escape addressing the anti-immigrant backlash that has grown in the West in the last few years, but DeParle concludes that immigration opponents will have a hard case to make against the hardworking, religious mother of three Rosalie — a legal immigrant who arrived in America not by sneaking over a wall, but by airplane.