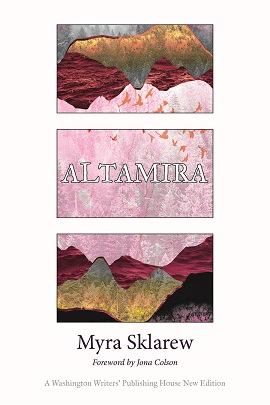 Like the caves of the same name in northern Spain, Myra Sklarew’s poetry collection Altamira is to be celebrated, studied, and admired. Its title poem asks, “And if I should give / you these words / and you are not there to receive them / so they become part / of what is unused / and moves on?”

Lucky for us, we are here to receive and celebrate a new edition of Altamira. In 1987, the Washington Writers’ Publishing House — now in its 48th year — first published the work, Sklarew’s third full-length collection. It was re-released by WWPH in June.

I first met Sklarew in 2001, when I entered the Master of Fine Arts program at American University — a program she founded in 1980 with the support of many. Originally hired in 1970 and paid $75 per course, Sklarew initiated a weeklong international writer’s conference (in collaboration with the performing-arts department) that brought hundreds of people to the AU campus. It became clear that she needed to establish an ongoing program, which soon became the MFA program, still the only one offered in Washington, DC.

Sklarew co-directed the program for many years and was one of the most generous and intimidating professors I had. She had a reputation for being tough but tender. I took numerous poetry workshops with her, in addition to a course she taught on the relationship between literature and memory. When I began reading her work, I started with Altamira and was struck by its craft, intimacy, and emotion. The poems remain timeless and immediate even 35 years after their initial printing.

In “Hieroglyphic,” she writes, “Once a girl / innocently typing / put the wrong word / on the page / and in a flash / changed my career.” Many of the poems in this collection are a glyph seeking its interpreter as the reader wanders through landscapes known and unknown. These intimate and often aching poems of be/longing live on the margins and inquire about departures, arrivals, and returns.

In “Looking at Men,” Sklarew writes, “Yesterday, a man asked me / why I was traveling alone. / If he were my husband, / he would not permit me to / go away.” This poem highlights the questions Sklarew asks: What are the limits of gender, culture, expectation? Why does someone have the privilege and others do not?

And there are questions of being an outsider in another culture and religion. In “At the Syrian Border,” she writes, “Walking between two mine fields / I pretend I am a tourist here.” She investigates belonging and place and invites us into other countries, languages, and families. She voices love for the “old country” and question the “new.” What is home? What is language? Is home where we are born or where we are buried? A place we have lived and given our strength and best years? Some are born speaking one language and die speaking another.

Many times, we do not get to decide where home is; Sklarew investigates the emotional and physical borders that often decide for us.

There are also poems about motherhood and womanhood and how we understand things in the world. Sklarew trained in science, and her curiosity about science and poetry explodes and questions semantics and nature. Specifically, in the poem “Walking,” the narrator finds “a white egg / too large for a bird,” and then mistakenly is answered that the egg is from a “wild dog.” She imagines “the wild dog / hatching from the white egg. / I see him flying.”

Sklarew inverts the expectation of the word “dog.” How do we know what a dog is? How do we define what things are? The play of imagination and definition is masterful — one of Sklarew’s many gifts that she gives us here.

Whether you, dear reader, know Myra Sklarew and her work or not, I invite you to let her Altamira take you on a journey to other places — physical and emotional. I ask that you receive the words of this masterful poet, teacher, and human. Let these poems connect us all.