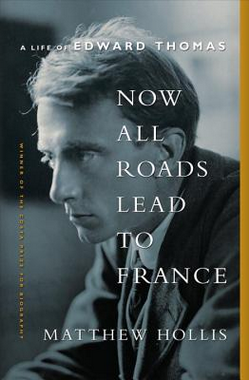 Over the last several weeks, I’ve been delving into the life story and poetry of Edward Thomas. Who’s that, you may ask? I’ll admit I thought the same until my interest was sparked by his poem “Lights Out,” suggested by a listener to my weekly podcast, Read Me a Poem. This led me to his other poems and to Matthew Hollis’ absorbing biography, Now All Roads Lead to France. Then I read the diary which Thomas kept during the Great War, from January-April 1917.

Thomas didn’t write poetry for years. He was an essayist and a journalist for the Daily Chronicle. But his honest approach to language, combined with his sensitivity to cadence and prosody, made him one of the most astute literary critics of his day.

For one thing, he understood the qualitative difference between the enduring and the popular. His clear insights into poetry are refreshing and applicable today. Of W.B. Yeats, he wrote, “I seem to find with astonishment that verse is the natural speech of men as singing is of birds.”

He wasn’t quite so struck by Wilfred Gibson, who was then wildly popular. “At the end of this book,” Thomas wrote, “we have the feeling that after all, he has merely been embellishing what would have been more effective as pieces of rough prose, extracts from a diary, or even a newspaper. The verse has added nothing except unreality, perhaps, not even brevity.” Today, nobody knows who Gibson was, and his poetry predeceased him.

Biographer Hollis, who is himself a poet, puts it like this: “He had made a crucial point about not only Gibson’s verse but all poetry: namely that bad poems make the mistake of confusing poetic writing about a subject with the skill of making good poetry.” He adds further on: “Without cadence, a poem could only act upon the intellect and could therefore only ever be partially successful.”

It must have been painful to possess such a natural gift for language and yet be in the service of mediocre writers. Thomas struggled to support his growing family and was prone to dark moods. To escape the stifling domesticity of a difficult marriage, he took long, solitary walks and became a great lover of nature.

Then, at a London café in 1913, he met an unknown poet called Robert Frost. Thomas wrote a rave review of Frost’s first collection, North of Boston. This poet, he said, had gone “through the paraphernalia of poetry into poetry once again.”

What a great description! Don’t we all hate the paraphernalia of poetry? Isn’t that what turns so many off?

The friendship that grew between Thomas and Frost changed them both. On their many walks through the Cotswolds, they enjoyed stimulating talks about sound sense and what poetry could do. When Frost encouraged Thomas to turn his hand to writing verse, something inside burst open. In the space of just a few years, Thomas wrote more than 140 poems.

Hollis’ biography gives you a real sense of the atmosphere of their lives, and the lives of others in their circle — Walter de la Mare, Rupert Brooke, and Lascelles Abercrombie. Before the Great War, they spent gentle family summers in Cotswold cottages, writing, gardening, and trying to live sustainable lives.

Then came an incident that changed the dynamic between Frost and Thomas. Frost was insensitive to English laws regarding private land and public footpaths. It’s surprising, I think. He had recently published “Mending Wall,” which ends with the famous line: “good fences make good neighbors.” In any case, Frost got into an explosive confrontation with a gamekeeper who tried to drive them off private land. Thomas failed to defend Frost and felt bad afterward, thinking it made him, Thomas, look cowardly.

Their friendship continued. But shortly after this, Frost returned to America, taking along Thomas’ son, Merfyn. Thomas was seriously considering emigrating to the United States until World War I broke out. Then he wavered. England meant so much to him. He wondered about enlisting.

Frost and Thomas went on corresponding, and in 1915, Frost sent a poem inspired by his friend’s characteristic indecisiveness. It was “The Road Not Taken.” Only, rather than taking it as a playful tease, Thomas took offense. Hollis suggests that this, in combination with the notion that he felt he’d already appeared cowardly, was key to Thomas’ decision to join the war effort.

If only he’d found another kindred spirit. And he might have done so, in camp. Hollis writes that, at High Beech from 1915-16:

“[Thomas] kept his writing entirely secret from his camp colleagues…His reservation is a matter of regret for only a few huts away was Wilfred Owen, who likewise was keeping his early verses to himself. Had the two men declared their interest then they would surely have taken to one another’s company.”

They never met, and both were killed in the war, along with poets Rupert Brooke and Siegfried Sassoon.

Anyone interested in the Great War should read Thomas’ war diary. His melancholy, his darkness, his love of nature, and his complete lack of pretention all resonate powerfully. This entry of March 21st was written in Arras, France, less than a month before his death:

“Great pleasure to be going back to sleep and rest. No Man’s Land like Goodwood Racecourse with engineers swarming over it and making a road between shell holes full of blood-stained water and beer bottles among barbed wire. Larks singing as they did when we went up in dark and were shelled. Now I hardly felt as if a shell could hurt, though several were thrown about near working parties.”

In his notebook, Thomas wrote out his poem “Lights Out” as prose, with capitalizations indicating where line breaks should be. It’s no wonder poet Ted Hughes once called Thomas “the father of us all.” When you read his poem “Digging,” which begins:

Odours that rise
When the spade wounds the roots of tree,
Rose, currant, raspberry, or goutweed,
Rhubarb or celery

you almost hear the ring of Seamus Heaney’s spade against the gravel. “Tall Nettles” ends with the verse:

This corner of the farmyard I like most:
As well as any bloom upon a flower
I like the dust on the nettles, never lost
Except to prove the sweetness of a shower

and recall Heaney’s poem about picking mint: “It looked like a clump of small dusty nettles/Growing wild at the gable of the house…”

Thomas’ bold consonants and clean lines about the November sky, driving rain, mud, and sedge-warblers take you into a similar unforgiving landscape as the poetry of Hughes. And one of Thomas’ best loved poems, “Adlestrop,” begins like this:

Yes, I remember Adlestrop
The name, because one afternoon
Of heat the express train drew up there
Unwontedly. It was late June

It captures the kind of overlooked moment that knits together the fabric of British life, and which you’ll find abundantly in Philip Larkin. “Adlestrop” is a perfectly structured poem, held together with natural, unpretentious rhythms.

And I thought Edward Thomas was a minor poet!

If you’d like to hear his poem “Lights Out,” check out this week’s Read Me a Poem podcast.

Serendipity leads to a poetic discovery.