A Book and Its Cover 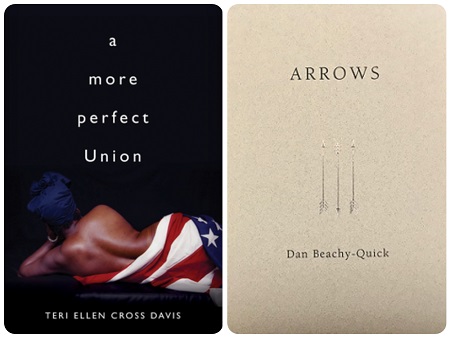 The two collections I’m writing about this month have very little in common. But what they do share, other than the excellence of the work itself, is a book design that’s a natural extension of the poetry it contains.

When the cover of Teri Ellen Cross Davis’ second full-length collection, a more perfect Union (Mad Creek Books), was revealed on social media pre-publication, the buzz was immediate and intense. It features a photograph of a Black woman reclining on one side, her back to us. Her head is propped on one hand, one large hoop earring peeking out from a blue headwrap. Her beautiful, strongly muscled back is bare, her hips are draped with an American flag. It’s a photo that, like a good poem, reveals more the more attention you pay to it. But right away, the reader knows that the poems inside will be strong, elegant, embodied, female, and Black.

Fans of Davis’ first collection, Haint, will be glad to find the poet still exploring, here, the ways in which popular music heals, reveals, and empowers. One poem, “Bad Girls Album Cover,” an homage to an album by Donna Summer, begins, “By the time I was seven, I knew I would like sex, knew / I would be good at it,” youthful swagger conveying exactly the kind of sexual confidence Summer sang about.

Half of the poem’s lines describe the details of the singer’s album-cover pose in language so delicious you can almost taste it — her “light brown-sugared face,” lips “slick in shiny scarlet gloss,” the slit in her dress that reveals “a black lace stocking // a garter as garnish.” The poet concludes, “Why wouldn’t I / want to be like her — up front about being wanted?”

After her elegant depiction of the cover, Davis brings us right back to earth with the simple colloquialism of “up front.” That mix of the everyday and the elevated runs through a more perfect Union, as does the directness of this poem’s opening lines. Davis doesn’t waste time. Her lyricism is purposeful, her observations cut quick and sharp.

When she writes of family life, there’s no sugar-coating. The poem “Crescendo” begins just after the narrator has spanked her 4-year-old son. Now, engaged in an emotional tug-of-war, they reach for each other, pull back. Then this:

But today, another White cop walked
free, another Black body was still
on the ground. “Not indicted”

undoubtedly the future outcome.
Four years ago, I crossed labor’s
red sea of pain to birth a boy —
no doctor hit his backside, now I raise

my hand to complete an act
older than me, breaking the black
back of the boy to make a man
who can survive in America.

The contradiction between birthing and hitting, the Shakespearean elegance of “labor’s / red sea of pain” up against the biting vowels and hard consonants of act, breaking, black back, and the link between the unjust world in which the boy will have to protect himself and the day’s corporal punishment drive the pain home. Finally, exhausted, mother and son rock together, but there is no easy resolution, no neat knitting-up of what has happened. The poem concludes:

….Tonight, I give up,
cuddling this boy so full of belief
in himself, I’m too tired with love
to beat it out of him.

There will be other nights, other mother-son fights, maybe more spankings. There will also be more love.

Perhaps the finest achievement of this book, however, is Davis’ sequence of goddess poems. Rather than reimagining established mythological figures, she conjures her own divinities of blood, of scars, of parenting, of interracial dating, of lust. The “Goddess of Anger” blesses the gift of righteous rage, saying, “Let me be your ignition point…I’m all your swallowed heat / simmered into flesh.” Simmering wisdom into flesh, into language, is exactly what the poet has done in this collection. It’s a knockout.

Dan Beachy-Quick’s new collection, Arrows (Tupelo Press), also wears its heart on its cover. The book is smaller in dimensions than a typical poetry book and has a grey, rough-textured cover. On the front are three silver arrows; on the back, instead of blurbs, we find text that begins, “This book rests in the palm of the hand like a shard of ancient pottery.” The copyright page is, against convention, in the back. The only front matter consists of two fragments from Heraclitus, “Look at the bow and the lyre” and “stepping near.”

I’ll admit, at first, this all seemed a bit precious. Isn’t it for the reader to say how the book rests in her hand? How many of us have ever held “a shard of ancient pottery,” anyway? But the poem’s opening sequence, “Primer,” drew me immediately into another world, an imagined ancient time where place is a meditative state of mind infused with Platonic ideals and ideas.

The 10-part sequence moves through brief, elliptical descriptions of various subjects. One, entitled “astronomy,” begins, “grow shy, grow /humble, grow / dense as dying / star”; “ethics” tells us, “it’s only a stone, the mind — / stone with storm inside —.” It concludes with “patience,” here presented in its entirety:

patience is my lovely prayer
for both my lovely daughters

practice latching barb to barb
until the thistle’s burrs relent

and as in summer the thrush
weaves thorns into her nest

let harm work quietly against itself
until violence is a place for rest.

There is so much to unpack in these quiet lines — the reference to Penelope’s patient weaving in The Odyssey; the barb and burr connection; how objects that sting and pierce can strengthen a nest or home; the inversion of violence to rest — that though I’ve read it over and over aloud, I still don’t grasp it all. But then, that’s part of the point of this collection. Again and again, Beachy-Quick sets up an idea only to let it fly, much like the arrows of his title.

The author of multiple poetry collections, as well as collaborative chapbooks, prose collections, criticism, and fiction, Beachy-Quick has a mind well stocked with classical themes and characters. There are poems here on Catullus, on Theseus’ ship, on an unnamed oracle. There’s a riff on one of Virgil’s Eclogues, references to Pythagoras and Homer, a poem about the Phoenician alphabet.

Unless you’re a classicist yourself, you might need a few reference books (or handy use of online searches) to follow these poems to their landing places. But rather than being put off by that, I was grateful to feel, as I read, my mind widening to encompass the contradictory impulses, the sly jokes followed by unabashed celebration that these poems contain.

One poem that beautifully encapsulates the entirety of the collection is the simply titled “Some Rules Of Grammar.” If you’re expecting talk of nouns and verbs, forget it. Instead, without naming them, Beachy-Quick gives us the Orpheus and Eurydice story, a “grammar of wanting.” In the end, Eurydice dead, Orpheus tunes his lyre “And sings inside the song a hollow for a home.” The poem concludes:

Word by word the voice works in what it wishes
A name neither grave nor cloud but some other sign
The axe handle I or I the arrow quivering in the ground.

How we’ve all, from time to time, felt that hollow home. How art creates an eternal way to mourn beyond flowers on a grave. Are we the ax handle or the arrow, or sometimes one, sometimes another? We may never know. But this elegiac and deeply musical collection asks the right questions.