20+ Non-Beach Reads to Read at the Beach

Who says only potboilers deserve a spot in the sand? 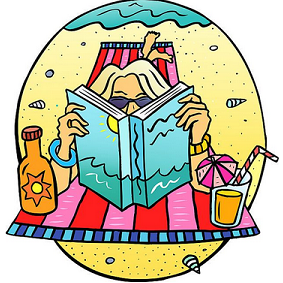 The best vacation books grab you and won’t let go, and the eclectic titles here — from poetry and memoir to dystopia — fit that bill nicely. Pick one to enjoy on your next summer escape, even if it’s only to the back yard.

All the King’s Men by Robert Penn Warren. “The most spellbinding political novel of all time.” ~Talmage Boston

Kindred by Octavia Butler. “This story about a time-traveling Black woman from 1970s Los Angeles going back to antebellum Maryland, where she is taken for a slave and treated as such, is, well, very timely in bringing home the legacy of slavery.” ~Darrell Delamaide

Beware of Pity by Stefan Zweig. “An unputdownable classic in which an ambitious Austrian cavalry officer makes a faux pas at a party and, in an effort to make amends, finds himself in a self-made trap from which he can’t escape. Set before the First World War, this psychologically complex story is over the top in many ways, but that’s part of its irresistible charm.” ~Amanda Holmes Duffy

Fierce Attachments: A Memoir by Vivian Gornick. “The story of a fractured, combative relationship between a mother and her daughter.” ~David Bruce Smith

Whale Day and Other Poems by Billy Collins. “Let’s face it, no one wants to vacation with someone who reads poetry collections at the beach. (I think even Billy Collins would support leaving the poetry reader inside as others gather beach or poolside for relaxation and cocktails.) However, one reading of the poem ‘The Emperor of Ice Cubes’ would convince your friends and family that poetry does not have to be about a Grecian urn or a red wheelbarrow. That poetry can appreciate the value and joy in an Igloo cooler packed with beer.” ~Drew Gallagher

The Souvenir Museum: Stories by Elizabeth McCracken. “I love short stories, on or off the beach. Right now, I've just reviewed and loved this collection. These stories are like shuffling postcards from another family's past trips, watching their slides click by. Beautiful.” ~Ellen Prentiss Campbell

Apeirogon by Colum McCann and Milkman by Anna Burns. “These two fairly recent novels are big and juicy in unusual ways. One reason they’re great beach reads — in addition to their absorbing plots and stunning language — is that they’re stronger if you read them in long stretches, rather than in short bursts before bedtime. They recreate worlds that are out there but that we may need time to adjust to.” ~John P. Loonam

The Black Tides of Heaven by Neon Yang. “Yang’s Tensorate series, which begins with this one, is set in a futuristic world of magic, mega-machinery, and mayhem that probably doesn’t call to mind sunny days and drinks with umbrellas. But do yourself a favor and bring the whole set on vacation — you won’t want to put these books down.” ~Mariko Hewer

Gilgamesh: The Life of a Poem by Michael Schmidt. “As one who appreciates epic poetry but is not inclined to read it at the beach, I recommend this one. The premise is that, although it's the oldest of Western epics, it's also the newest (because it was only recently discovered) and the most incomplete (because it was written on dried clay tablets 3,000 years ago). Both a mystery and an analysis of what life must have been like in old Sumer/Babylon.” ~Y.S. Fing

War and Peace by Leo Tolstoy. “A really smart friend of mine once said he read this on the beach. Impressive! Someone should start a social-media trend: Selfies on the sand with Lev.” ~Dorothy Reno

Paradise Lost by John Milton. “For a study in ‘people.’ Who has the most interesting personality? Satan? Archangel Michael? Adam? Someone else? Have fun! Or you could cheat if you want (as I did) by reading Joseph Lanzara’s John Milton's Paradise Lost in Plain English: A Simple, Line by Line Paraphrase of the Complicated Masterpiece.” ~Steve Case

The Little Animals by Sarah Tolmie. “I read this over spring break on an empty Ocean City beach. It’s about the citizen-scientist Antoni Van Leeuwenhoek and the artist Vermeer. Big, fat historical novels are my best beach reads.” ~Caroline Bock

Meander, Spiral, Explode: Design and Pattern in Narrative by Jane Alison. “I haven't read this book on writing narrative yet, but I'd love to spend a week at the beach thinking conch-shaped thoughts about plot.” ~Carrie Callaghan

Station Eleven by Emily St. John Mandel. “Slather on the sunscreen before you pick up Station Eleven, because you will not be able to put this book down. A mesmerizing rendition of a post-apocalyptic hell which our own world was terrifyingly close to becoming.” ~Heidi Mastrogiovanni

Fiction magazine. “For this beach trip, I'll be bringing the latest issue of this literary journal out of the City College of New York.” ~Chris Rutledge

“For the past few years, each summer’s reading has included a James Bond novel — or two! I’ve been collecting the Folio Society’s new editions of the Ian Fleming originals — deliciously illustrated by Fay Dalton — and it’s a joy revisiting the stories that took up so much of my summer reading as a teenager, especially in such cool new packaging. But I’m also a fan of the 007 books written by other writers; check out William Boyd’s Solo and two by Anthony Horowitz: Trigger Mortis and Forever and a Day. (And for another fun twist, Donald Westlake’s Forever and a Death, not strictly Bond but with a Bond-like pedigree!)” ~Art Taylor

Against White Feminism: Notes on Disruption by Rafia Zakaria. “This essay collection currently joins me on my trips to the waterfront. In it, Zakaria disassembles many of the class and race issues that swarm around feminism and reshapes them.” ~Gretchen Lida

The Wall by John Hersey. “Like the best historical fiction, this transportive, multilayered novel about the horrors (and occasional triumphs) of the real-life Warsaw Ghetto Uprising in WWII immerses you in another place and time. It also exposes as utterly absurd the recent cries of ‘Tyranny!’ by anti-maskers somehow convinced they’re living under a fascist regime.” ~Holly Smith

We here at the Independent love every piece we run. There are no winners or losers. Seriously, though, here are July’s winners.