16 Fiction Releases to Watch For

Kick off your New Year of reading with these highly anticipated picks! 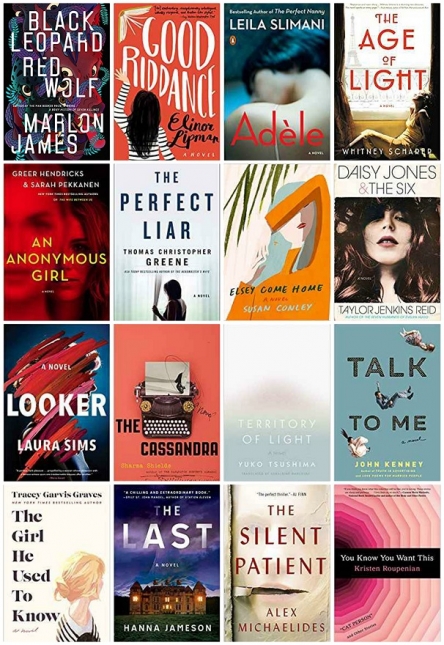 Talk to Me by John Kenney (Jan. 15, G.P. Putnam’s Sons). Ted Grayson is a veteran TV anchor who has it all…until he doesn’t. When his profanity-ridden rant in caught on camera, Ted finds his career on the verge of destruction, alongside his unraveling marriage and his already frail relationship with his daughter.

The Last by Hanna Jameson (Apr. 9, Atria). A man who believed he had plenty of time to answer his wife’s longing text is suddenly fighting for survival after a nuclear bomb hits Washington, DC, and the hotel he’s staying in becomes a battleground.

Elsey Come Home by Susan Conley (Jan. 15, Knopf). A former successful painter is forced to take a hard look at her life when her husband hands her — along with a silent ultimatum — a brochure for a weeklong mountain retreat.

Good Riddance by Elinor Lipman (Feb. 5, Houghton Mifflin Harcourt). Among her late mother’s things, Daphne Maritch finds a yearbook filled with notes she doesn’t understand. When she tosses it in the recycling bin and it’s found by a snooping neighbor, an unusual turn of events commences.

The Age of Light by Whitney Scharer (Feb. 5, Little, Brown and Co.). The passionate romance between iconic model-turned-photographer Lee Miller and the legendary surrealist Man Ray is explored against the backdrop of 1929 Paris.

Looker by Laura Sims (Jan. 8, Scribner). In this electrifying Hitchcockian debut, an unhappy woman’s obsession with a nearby actress will push the boundaries between insanity and desperation.

Territory of Light by Yuko Tsushima (Feb. 12, Farrar, Straus and Giroux). A woman abandoned by her husband decides to begin a new life in Tokyo. As she struggles to raise her young daughter alone, she finds herself torn between her new home’s unbearable light and an equally frightening darkness.

The Cassandra by Sharma Shields (Feb. 12, Henry Holt and Co.). A woman goes to work in a top-secret DC research facility during World War II. Shortly thereafter, she finds herself haunted by how the mission she’s part of will affect humankind.

The Girl He Used to Know by Tracey Garvis Graves (Apr. 2, St. Martin’s Press). Annika and Jonathan meet at their college chess club. Despite planning a future together, they are forced apart by a tragedy. Now, a decade later, they must confront the fearful circumstances that drove them away from each other.

The Perfect Liar by Thomas Christopher Greene (Jan. 15, St. Martin’s Press). A widow with a teenage son, Susannah meets and soon marries Max. Their life is close to idyllic until she receives a note at her door: I KNOW WHO YOU ARE.

An Anonymous Girl by Greer Hendricks and Sarah Pekkanen (Jan. 8, St. Martin’s Press). The authors of The Wife Between Us are back with a page-turner about a woman who decides to participate in a psychology study only to find her worst fears becoming real.

Daisy Jones & the Six by Taylor Jenkins Reid (Mar. 5, Ballantine). Breaking from her usual style of writing, Jenkins Reid pens a compelling novel highlighting the rise of a famous 1970s rock band and the mystery behind their shocking breakup.

Adèle by Leila Slimani (Feb. 5, Penguin). Adèle’s seemingly perfect life as a journalist, mother, and wife to a successful surgeon masks a secret reality: She is involved in countless illicit affairs in an everlasting quest to feel alive.

You Know You Want This by Kristin Roupenian (Jan. 15, Gallery). From the author of “Cat Person” comes a collection of short stories about the connections between gender, sex, and power.

The Silent Patient by Alex Michaelides (Feb. 5, Celadon). Why did Alicia Berenson, a famous painter married to a renowned fashion photographer, shoot her husband five times in the face and refuse to speak about what happened? It will be criminal psychotherapist Theo Faber’s job to find out.