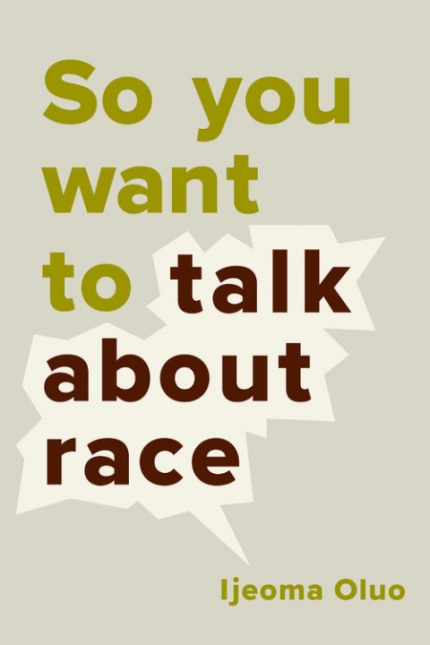 While white readers are going to gain insight on hard-to-understand-unless-you’ve-lived-it topics in So You Want to Talk About Race, readers of color generally will find camaraderie and a resource in Ijeoma Oluo’s conversational approach to race, racism, and racial violence in America.

The book is divided into chapters that tackle issues such as the myth that class is a bigger problem than race or what racism and micro-aggressions actually are. But what makes So You Want to Talk About Race such a strong addition to books that address race is that the author also turns her eye toward much more complex issues like intersectionality, the school-to-prison pipeline, and cultural appropriation with wit and heart.

In her introduction, Oluo sets up her experience growing up in a racially marked body in America, from the micro-aggressions that populate her daily life to the pleasures of Jollof rice, family, and the glories of black culture — things like jazz, Toni Morrison, hair braiders, and sweet potato pie.

But in this book, she’s not writing to celebrate, she’s writing to educate and to fight back against this fact: “It is very hard to survive as a woman of color in this world and I remember saying once that if I stopped to feel, really feel, the pain of the racism I encountered, I would start screaming and I would never ever stop.”

Personal experience means that Oluo has had conversations about race her entire life, and she recognizes how utterly exhausting it is to be “the black friend” or to have to coexist in a majority-white environment.

While Oluo tells stories about her life in Seattle in order to frame definitions and unpack concepts, she also provides easy-to-understand, step-by-step lists for approaching conversations about race:

“Ask yourself: Am I trying to be right, or am I trying to do better? Conversations about racism should never be about winning. This battle is too important to be so simplified. You are in this to share, and to learn. You are in this to do better and be better. You are not trying to score points, and victory will rarely look like your opponent conceding defeat and vowing to never argue with you again. Because your opponent isn’t a person, it’s the system of racism that often shows up in the words and actions of other people.”

Passages like this build understanding in a style that readers will enjoy because they make talking about race as clear as it can be.

Oluo is intellectually sharp and even funny, and this is one of the strengths of her book. For instance, she writes: “White supremacy is this nation’s oldest pyramid scheme. Even those who have lost everything to this scheme are still hanging in there, waiting for their turn to cash out.”

With such punchy one- and two-liners, Oluo builds understanding. Readers may find the direct address — the “you” she points at frequently — uncomfortable, but it’s appropriate. Combined with the book’s overall tone, it offers an intimate experience where readers can process situations before they enter into their own conversations about race.

One of my concerns with So You Want to Talk About Race is that while the book is well-grounded in the African-American experience, it extends itself to talk about other people of color and Indigenous peoples, and these moments occasionally show Oluo’s own basic assumptions that create an inhospitable climate for other racially marked bodies.

For example, she reveals her colonial positioning of Indigenous peoples by calling them “Indigenous Americans.” This will be read as extremely problematic — a micro-aggression in a book about understanding micro-aggressions — for Indigenous readers. Yet, Oluo understands that “even after having spent years of my life focused on racial justice, Asian Americans are at times an afterthought in my work.”

And she owns this, in the Asian-American context, modeling what she preaches when she says, “I, like so many of us, have to do better.”

In the end, white readers open to educating themselves will come away from So You Want to Talk About Race with a fairly nuanced understand of race relations and of the traumas enacted, in particular, on black bodies through the systematic inequalities present in American society.

[Editor's note: Author Ijeoma Oluo indicates that future editions of her book will use the term "Indigenous peoples" rather than "Indigenous Americans."]