Haunted: On Ghosts, Witches, Vampires, Zombies, and Other Monsters of the Natural and Supernatural Worlds 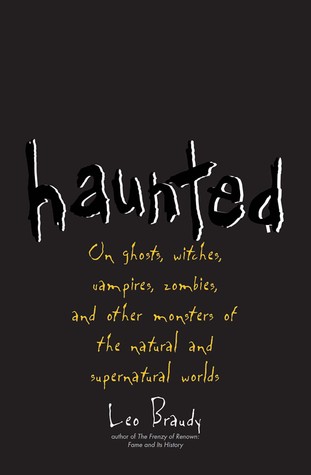 If you go by its flashy title, this book seems to promise a reading experience with lots of spooky thrills and spills. But be warned before you venture in: This is a serious study where the spooks and their kin do occasionally shimmer out of the mist, but are always shrouded in academic raiment.

On the other hand, if you appreciate thoughtful and scholarly reads, Leo Braudy’s Haunted will likely thrill and not disappoint. Braudy pays off the fetching promise of the book’s subtitle with erudite insights spanning the last three centuries in the life of a persistent literary and cultural phenomenon, the figure of the monster, that mysterious and evil presence that has lurked in our shared imagination for millennia.

As Braudy explains, the monster often appears under the varied guises catalogued with such sprightly marketing relish in the book’s subtitle. But at its core, Braudy’s monsters embody the “other,” the horrific, often evil, intruder from beyond normal experience.

“This strange distorted creature, sometimes part human and part animal, sometimes part divine and part diabolical,” as the author puts it, seems intent on uprooting or at least disrupting the normal social order, the comforting routine of our everyday world.

A professor of English at USC, Braudy specializes in 17th- and 18th-century British lit, in film history and criticism, and in modern American culture. He’s the author of 10 far-ranging books that include a history of our evolving impulses to seek fame and public acclaim, as well as a chronicle of changing attitudes toward war-making and heroism.

Professor Braudy has also written a raft of highly readable studies of popular imagination and the movies, his most recent being The Hollywood Sign: Fantasy and Reality of an American Icon. He also co-edits Film Theory and Criticism: Introductory Readings, a definitive and frequently revised college textbook for film students. It’s not surprising, then, that Braudy’s ease and insight in discussing the cinematic exemplars he brings forward in Haunted are highlights of the latter sections of the book.

In Haunted, Braudy crafts a highly selective commentary on the monster phenomenon, anchoring his discussion in the widespread contemporary response to a real natural disaster, the massive earthquake that destroyed Lisbon and its environs in 1655, with deaths running into the tens of thousands.

While this historic moment may seem a somewhat arbitrary jumping-off point for the author’s ruminations, it does make sense on at least one level. Braudy sees the religious and secular cultures of mid-17th-century Europe, awash in controversies and evolving conceptions of divine providence and salvation, as an attitudinal tipping point in the West. So conceived, it becomes a convenient launching pad as he guides us ably through three centuries of monster exemplars.

This makes perfect sense from Braudy’s standpoint. Although the archetypal, literary, and historical roots of the monster figure run far more deeply, this archetype surfaces with increasing frequency after the turn of the 18th century. Accordingly, Braudy limits his scope to early modern and present-day appearances of the type (although this reviewer would love to see a comprehensive survey of the monster archetype in culture, literature, and film from pre-literate times to the present).

Braudy scatters impressive insights with authorial abandon across scores of focal points, literary and cultural, during his chosen period. For instance, he dwells at length on the demonic villain-heroes of the British Gothic novel, not to mention their American descendants in Poe and Hawthorne and their later apotheosis in Bram Stoker’s Dracula.

Significantly, Braudy sees the character of the hyper-rational detective — for the most part a mid-19th-century arriviste on the literary scene — as the counterweight to his monster archetype. It shouldn’t surprise you to find that Arthur Conan Doyle — otherwise a credulous disciple of spiritualism and table-tipping — is lionized in Haunted for creating Sherlock Holmes, the stalwart debunker of the seemingly uncanny and the forbear of a pop-lit tradition still thriving and evolving today.

In the concluding sections of his book, as Braudy turns his attention to film, he shines. You’ll find discussions of the many standards of Braudy’s monster archetype as configured for the screen. Braudy locates many filmmakers dead center in his monster tradition, notably James Whale (“Frankenstein” and “Bride of Frankenstein”), Val Lewton (“Cat People,” “I Walked with a Zombie”), and the recently deceased Wes Craven (“A Nightmare on Elm Street” and the “Scream” series), plus many other familiar names, from Corman to Kubrick to De Palma to Demme. It’s a rich tradition, and Braudy handles it with inspiring scholarly aplomb.

For the casual reader, though, it may make sense to approach Haunted as an index-driven read rather than a cover-to-cover undertaking. Although wondrously well written, the book is dense with detail, which could prove frustrating for some, however strong their interest in the topic.

Still, whatever your approach to tackling this study, Braudy’s insights should add considerably to your understanding of the monstrous, not to mention our innate impulse to believe in unseen worlds, especially as these elements have manifested themselves in Western literature and culture over the last three centuries.

Considering cannibalism...and other food for thought