An engaging but disjointed exploration of the meaning and costs of liberty. 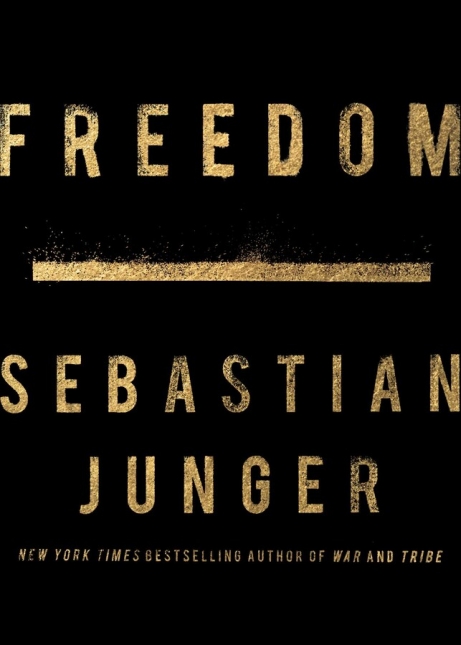 There’s nothing like a long walk for wrestling with big ideas; Sebastian Junger takes a very long one in order to ponder a very big idea in his very short book, Freedom.

The text rotates among a modern adventure tale, thumbnail histories and bits of social science, and meditations on the nature of liberty and community. Each part is engaging, entertaining, and enlightening. But the whole doesn’t offer a coherent experience: It’s more like three disconnected rambles than a single trip to a fixed destination.

The adventure is of a group of middle-aged combat veterans hiking alongside Mid-Atlantic railroad tracks, sleeping under bridges, dodging cops and railroad officials who’d nab them for trespassing, and enjoying the vital simplicity of daily survival. Often within sight of housing developments, they bunk for the night after grilling their food on a piece of scrap iron suspended by two rocks over an open fire.

All they have for protection from potentially aggressive fellow vagrants is a machete and a mixed-breed dog. It’s all very elemental and a reminder that even amid Rust Belt wastelands and suburban sprawl, wilderness survives and can provide sustenance and cover. They even drink from streams!

The author’s historical and sociological forays cover almost as much ground as the hikers. We learn, for instance, how the nomadic Apache were able to elude white encroachers for centuries, while the settled Pueblo quickly fell; why, unlike in every other species, a smaller human can win a fight against a bigger one; and that when the Chinese built their Great Wall, it was as much to keep insiders in as outsiders out.

Junger’s ruminations on freedom, though wide-ranging, are mostly encapsulated by an observation about the colonial Pennsylvania frontier. Among the independent European homesteaders under constant threat from Native Americans, “Freedom and safety seemed to exist on a continuum where the more you had of one, the less you had of the other.”

But there are fresher ideas offered beyond this familiar tradeoff. Junger finds a source of freedom in that unique ability among homo sapiens of a smaller and weaker combatant — from lone boxer to political insurgent — to sometimes overcome a bigger, stronger opponent. That uncertainty of outcome in conflict forces the mighty to negotiate, to cede power, to grant freedom.

Junger is best known for his multi-year New York Times bestseller, The Perfect Storm, which was turned into a blockbuster movie of the same name. Critics likened him to Ernest Hemingway after that early triumph, and the comparison is warranted. His prose offers the same nervous constraint, the same explosive calm. He writes of his trek: “The things that had to happen out there were so clear and simple — eat, walk, hide, sleep — that just getting through the day felt like scripture.”

Sleeping on high ground was smart because if threatening locals came up one side, Junger and his crew could go down the other. But if retreat didn’t work, “We’d stay on top and see how badly they wanted this.” Predators of whatever type might descend on the group “quietly through the woods at night, but we had a dog and that wasn’t going to happen, either.”

As with Hemingway’s style, Junger’s distinctive voice might, in the mischievous mind, inspire parody alongside admiration. (After reading these passages, I put down my book and walked to the kitchen. There was only one tapioca pudding left in the fridge. My stepdaughter might want it, but I was there first.)

There are warmhearted and funny observations, too. No dog lover could naysay Junger’s conclusion while drowsing next to his animal companion that one of “God’s great oversights” was making the canine lifespan so much shorter than the human. He notes that modern society “hardly even knows we’re here and yet makes sure we’re completely dependent on it,” then adds drily, “That’s not a strong bargaining position for the individual to be in.”

The book’s musings on freedom and power include reflections on economic inequality made particularly relevant this summer by the legislative battle over President Biden’s progressive tax and spending agenda. While endorsing reforms to reduce wealth gaps, Junger can’t help noticing that throughout history, the most successful states — empires from the Roman to the British to the American — have always been “moderately unfair” to the bulk of their citizens, and wonders if there’s some connection.

Coronavirus most likely had not yet struck when this book was written. Otherwise, the pandemic would have provided another obvious example of the deadly impact of wealth distinctions, such as the mass slaughter of working-class soldiers in World War I. As Junger observes, “When social classes die at radically different rates from one another, some are obviously less free than others.”

The saga ends enigmatically, with an anticlimactic failure to achieve a desired goal. But that failure perhaps provides a further insight into the nature of freedom — and an argument for the book’s disjointed structure. Acceptance of the random nature of our existence may be what truly sets us free.