How our gridiron obsession undermines institutions of higher learning in America. 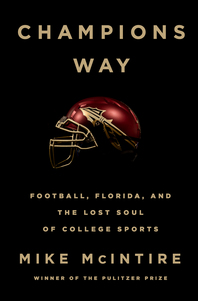 If Champions Way sometimes reads like the by-product of a folder full of newspaper clippings, beginning with the double-entendre title — a reference to the campus road that leads to the football stadium at Florida State, and to the compromises a university might be tempted to make in pursuit of national football prominence — that’s because it is.

For someone who’s spent most of his working life sniffing out public and private corruption as an investigative reporter and editor — with a Pulitzer Prize to show for it — Mike McIntire dives into the weeds of big-time college sports with minimum skepticism.

Imagine his surprise, then, when he finds the football roster at Florida State isn’t full of budding scholars rounding out their education by playing a little ball in their spare time.

Or that the 80,000 Seminole fans who pack Doak Campbell Stadium on Saturdays in the fall aren’t there to discuss what this year’s starting quarterback might be reading for his comparative literature classes.

Reading, it turns out, isn’t necessarily one of the skills required of football stars in Tallahassee.

Any regular reader of the sports pages of McIntire’s home paper, the New York Times, would’ve been disabused of that sort of naivete long ago. But despite this dubious conceit, or because of it, it’s hard to imagine a more damning — or more relentlessly reported — account of the excesses committed at a major university in the name of football excellence, some of which clearly appear to border on (or cross the line into) academic fraud, criminal conduct, and police malfeasance.

McIntire’s attention is first drawn to Tallahassee as part of an investigation into the ever-rising cost of higher education.

As he quickly learns, despite the millions of dollars in television money, ticket sales, and the like, rather than being a boon to the university’s general fund, the sports programs at most schools are a drain on precious resources.

The more the football or basketball team takes in, the more it spends on bigger and better facilities, the recruiting and pampering of athletes, and luring top coaches. Which explains why the highest paid state employee in 39 states is a football or basketball coach at a state university, and why Lou Saban, head coach of the Alabama football team favored to win a national championship this season, is the highest-paid public employee in the nation.

No wonder, then, that the athletics programs at all but a small fraction of Bowl Subdivision schools operate at a deficit.

But the financial cost, it seems, may be negligible alongside the loss of hard-earned academic reputations at institutions like Florida State.

In Tallahassee, McIntire comes across the tragic case of Christie Suggs, a 47-year-old single mother and Ph.D. candidate who teaches an online course in something called “beverage management,” part of the curriculum at FSU’s hospitality school.

For reasons at first unknown to her, Suggs finds her course especially popular with FSU athletes. But when her charges — a few of whom appear unable to read, much less do college-level work — fail tests, blow off assignments, and cut-and-paste whole papers from the Internet, she’s encouraged to give them a pass.

When she reports her concerns to the state’s attorney, the university doesn’t fire her. It cuts her hours and her pay, requires her to be on campus instead of working from home, where she could care for her young son, and waits for her to leave. Less than a year later, heavily in debt and in declining health, Suggs is found dead of a toxic combination of prescription medicines for pain, depression, and anxiety.

Appalling as that story is, Florida State’s football problems don’t end at the virtual schoolhouse door. As the team gears up for a 2013 championship run, campus and municipal police are dealing with — or, as it turns out, more often not dealing with — a mini crime wave: eleven players facing allegations ranging from rape and burglary to domestic battery and credit-card theft, to quarterback Jameis Winston’s infamous trip to the neighborhood grocery, where he walks off with $28 worth of crab legs.

This part of the story ends pretty much the way you think it might: Most of the criminal charges are downgraded or dismissed without inconvenience to the football program. Winston leads the Seminoles to a title, and shortly after his own year-old rape case is dropped, wins the Heisman Trophy. Then, like Winston — currently the starting quarterback for the Tampa Bay Buccaneers — most of the players move on, without degrees, to better-paying jobs in the National Football League.

But, hey, the school will always have that 2013 national championship trophy.

Just this month, the Times ran an update, under McIntire’s byline, on the internal investigation that followed Suggs’ allegations of academic impropriety. Not coincidentally, it appeared just as football fans turned their attention to Tallahassee, where third-ranked Florida State was preparing was to host No. 1 Alabama in a season-opening game with national championship implications.

Not surprisingly, the university found no wrongdoing in the aftermath of Suggs’ allegations, and the football party goes on, unchecked, in Tallahassee.

But after reading that story, or Mike McIntire’s stealthily titled book, even the most diehard Seminole fan may find it hard to stroll down Champions Way without pondering what those two words really mean, and what they cost.