Your Club in Lights: The Coyotes from Skylight Books in Los Angeles

A look at an interesting book club and how they do what they do. 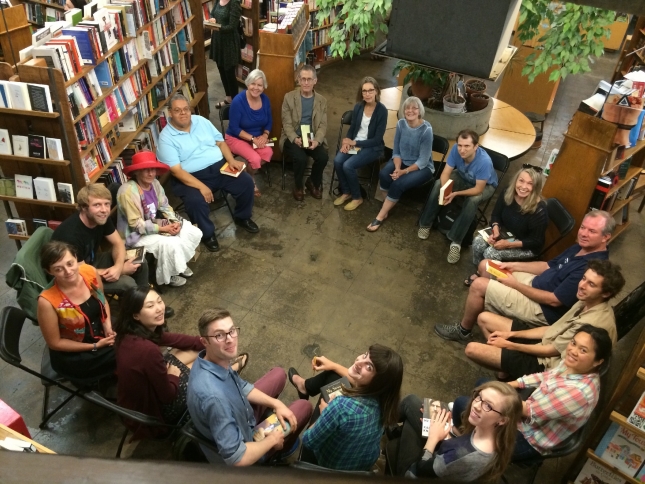 Your club’s name: Our club is called Coyotes, a name we inherited from the previous coordinator stemming from the prevalence of said creatures in Los Angeles.

Location: We are run out of Skylight Books in the Los Feliz neighborhood of Los Angeles.

How long you’ve been around: The book club has been around in name for many years, but in its current incarnation, I have been leading it for almost two years.

How many members: Our membership fluctuates from book to book, but it has steadily remained in the 10-15 person range since I have been leading the group.

Book you’re currently reading: We are tackling the first half of Karl Ove Knausgaard’s My Struggle: Book 1.

Book you last read: Our last book was Murphy by Samuel Beckett.

Book that’s up next: Our next meeting will be the latter half of the first volume of the Knausgaard. We have often done lengthy tomes and broken them up over the course of several meetings.

Since your inception, the book that has generated the strongest (good, bad, or otherwise) reaction: The most divisive book was definitely Speedboat by Renata Adler. Most of the books I have steered us toward have been favorably received, and for about half the group, Speedboat was, as well. A vocal portion, however, viscerally despised it, and seemingly by extension, Adler herself. It was a pretty fascinating experience!

The secret to your club’s success: I have consistently offered choices of books that are considered “difficult,” books that are easy to bail on if you go it alone (Ulysses, Gravity’s Rainbow, Ada or Ardor), but books which remain immensely gratifying and substantially easier when approached with the input and support of multiple readers.

Should your club’s name be in lights? Leave a comment below or send an email to bookclub@wirobooks.com and tell us about it!

Like so many other things — investing in a timeshare, having a third child — starting a book club seemed like a good idea at first, but things have taken a turn.

Your Club in Lights: The “One More Page Mystery Book Club” in Arlington, VA

A look at an interesting book club and how it is they do what they do.