The first rule? What happens in group stays in group. 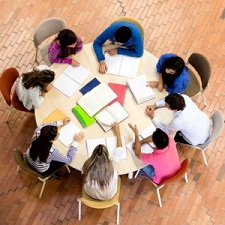 Confronting a bit of a crisis in my writing, I decided to do what comes most unnaturally to me: become part of a group.

There are myriad reasons why I love to write, not the least of which is the solitude. I mean, I like people and all, at least in theory. But after years of working in cubicles or open offices, it’s bliss to be swaddled in silence all day, alone with my thoughts.

Many of my favorite pastimes don’t require human interaction. Team sports were never my thing, neither playing nor watching. I swim, the ultimate in antisocial exercise. My favorite leisure activity is reading, but please don’t ask me to join your book club. When I play cards, it’s solitaire.

Writing can be lonely, though. When writer’s block kicks in, there’s no one to blame but yourself. When you’ve written yourself into a dead end, only you can write yourself out of it. When self-imposed word-count goals go unmet, you are solely accountable.

It’s been two years since I’ve embarked upon my current writing project, and I’m still sweating my way through the first draft, with no end in sight. Progress is so slow that I’ve even entertained the notion of going back to the cube farm. (Not really.)

So, when a friend invited me to join her flash-fiction writing group, I didn’t reject the idea outright as I have in the past. My friend is one of the hardest-working writers I know, teaching and taking writing classes and workshops, attending conferences, appearing on panels, juggling various writing groups. She’s published two novels, so she must be doing something right.

Still, I hesitated. Would the writing group help, or would it just be another time-sucking obligation that would distract from what truly matters: finishing my manuscript?

A wise university composition instructor advises his students to socialize their writing, incorporating it into their everyday lives. One of the scariest but most important breakthroughs I made as a writer was to say four little words aloud: I am a writer. With those words, I declared that writing was not my avocation, but profession, even though I was not yet, and might never be, self-supporting. It was a career move.

Ultimately, I joined the writing group because the pieces were strictly limited to no more than 1,000 words, the fewer the better. Economy of prose is important to the aspiring debut novelist because most publishers prize brevity in untested authors. My first novel had to be cut down by tens of thousands of words before my agent would submit it. Clearly, my word economy could be improved.

The writing group is a delightful mix of Washington, DC: multicultural, multilingual, well-read, and well-traveled (one is yachting around the world and participates via email). Writing seems to be a hobby for most of them, but they are serious and dedicated to the craft. Their ultimate goal is to submit their pieces, whereas my pieces are for the group’s eyes only. What happens in writing group stays in writing group.

So far, it’s been a humbling experience. My main challenge is to ignore the prose and concentrate on delivering a tight, coherent story that leaves no dangling threads or unanswered questions. The general consensus is that my characters don’t behave as expected, their motivations are too murky, readers want less of the what and more of the why.

Mostly that’s because, to keep to the word count, I sacrifice explanatory material for rhetorical flourishes or atmospheric embellishments. I’m going heavy on ornate details while skimping on the dull but essential framework. Thus, my pieces keep collapsing.

It’s also been humiliating. During our last meeting, I complained about the group’s comments and sought to blame the skimpy word count for my own shortcomings. I accused the group of an insatiable need for insight into character motivation.

So, another valuable lesson: Take criticism graciously. You might not agree with all of it, but hear what’s being said. Refute the feedback by working harder on the next piece.

I don’t know if the writing group will help me finish my novel, but growth doesn’t happen by staying within your comfort zone. While writing is a solitary endeavor, the writer nonetheless craves the company of readers — the more, the better.