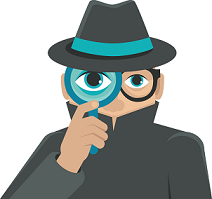 In addition to the pumpkin variety that I’ve just gorged on, I recently ate a sobering dish of humble pie. I attended a Murder Mystery Game last week amid high hopes that it would be a snap. In fact, I was fully prepared to dial back my intellectual credentials so as not to embarrass the others with my deductive prowess. After all, I write mysteries. I thought I knew my way around murder and mayhem.

You can see where this is going, can’t you? Not only didn’t I solve the crime in record time, humiliating everyone else, I didn’t solve it at all! The only one humiliated was moi.

The contest was simple. A murder has been committed at a pool party. The victim was a thoroughly despicable woman who gave everyone plenty of reasons to kill her. Heck, I wanted to murder her myself. Volunteers playing the party guests read scripts detailing their interactions with the bludgeoned victim, who was lying dead in the library. (There is always a body in a library, which is why I don’t live in houses with libraries.) The “guests” all provided their alibis — some good, some specious.

There were three rounds of script-readings. After each round, attendees had to choose one person they considered a suspect. By the third reading, one or two prime suspects emerged. The backstories of some of them were quite lurid. Apparently, there was a lot of hanky-panky going on. There were so many bodily fluids being exchanged, I don’t think I’d have swum in that pool.

Of course, I got everything and everyone wrong. The only ironclad alibis involved my prime suspects. By the final round, the suspects I’d chosen were no longer reading anything. They had returned to their seats in the audience and were enjoying the coffee and donuts that were the only upside (for me) of the evening.

It turned out that the killer was a man whose wife helped him cover up the foul deed out of loyalty and love. Neither was on my radar. I kept hoping Colonel Mustard would show up.

One interesting fact emerged from the program, though. The murderer and his wife were played by a man and woman — chosen at random — who turned out to actually be married! I hope they don’t get any ideas. I wonder if they live in a house with a library.

I know these events are supposed to be confusing, and this one succeeded admirably (at least in my case). I take some comfort from the fact that there were a few other mystery writers there, and none of us did particularly well. Proving, perhaps, that figuring out how to write novels is the only riddle we’re good at solving.

In his books, Lawrence De Maria has dispatched all sorts of people, but never in a library. Visit his website, where he relishes comments.