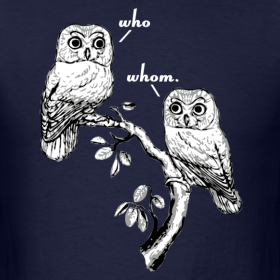 In the first sentence of a book described by the Wall Street Journal as “letter perfect,” one reads: “Every teacher…tells their students to stand.” When I went to school, every teacher told her students that a noun in the singular required a pronoun in the singular. If the Wall Street Journal allowed the decimal point to rove sideways in a column of figures and called that “number perfect,” the market might shiver in response. Why should writers not be held to the same standards of precision?

The mid-20th century marked the revolt of the conjunction. Little words, previously content to lie between clauses, rose up in Horn & Hardart ads to demand first place with a capital letter. They got their wish.

And Horn & Hardart is now out of business.

Recently, a couple of nouns and adjectives have combined forces to describe not only what they are, but hint at what happens in them. Cars used to have a front seat and a back seat. They still have front seats, separated by a gear shift, but the backseat has eliminated the dividing space, perhaps to reflect its notoriety for enabling transports as well as transportation.

Service with a smile! How true that slogan is when one reads notices found in hotel rooms. Not only are automobiles serviced nowadays, but the modern hotel offers its guests the option of being “serviced,” as well, with no fear of a visit from the vice squad.

Those of us nostalgic for the days when good English was precise English can happily turn to that master of the language, W.S. Gilbert, and sing, “Remember what* you are and whom addressing!”

*Note Gilbert’s use of “what” instead of “who” to indicate that he refers to Ralph Rackstraw’s lowly position and not to him as a person — elegant!

M.G. Elwood gets her kicks discovering bloopers in the daily newspapers.

From novels and memoirs to cookbooks and short stories, 2014 was an embarrassment of riches for readers. And in case you weren’t aware, books are the perfect shape for mile-high stacking under the tree. Here are 10 of the year’s best.