Allegories for the writing self. 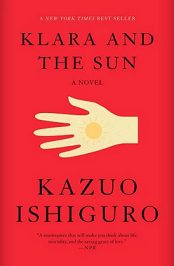 Sometimes, when I think about the professions I could be pursuing instead of writing, I reflect on other people — nurses, faith leaders, scientists, musicians, actors — fulfilling their purpose admirably, rising early, sleeping late, or doing whatever it is they do to get up in the morning. I remind myself that writing is what I do. It is my purpose.

In October, my book club read Klara and the Sun by Kazuo Ishiguro. Klara is purchased to live with a mother and her daughter, Josie, in their home looking out onto fields and farms. Klara serves Josie as her artificial friend. Her existence, or purpose, is to act as an emotional-support companion for the girl.

Klara has consciousness, and her purpose is hardwired into her. She is solar powered and turns to the sun not just for her own nourishment but for her sense of self. She prays to the sun, making wishes and alternately feeling abandoned and heard.

The allegory of purpose, belief, and mortality made me pull up the children’s story Frederick by Leo Lionni. Mouse Ferdinand is not good for much except creating poems. He lives in fields with cows in the distance. He finds his purpose is useful in fallow times when his recitations lighten the long winter nights. As they do in Lionni’s book, the barn and farm form important settings in Ishiguro’s novel.

Ishiguro’s faith is complex, as he has explained in interviews. His Japanese parents had to put a religion on his birth certificate, and there is a story that his mother simply wrote, “Zen Buddhist.” Yet he sang in a Christian choir growing up. In an interview with Terry Gross, Ishiguro said of the character Klara:

“But, I mean, I found it very interesting to remove the usual kind of — the social context away, you know, take it away and just have it in this rather pure, naive, artificial being — that [Klara], too, could actually repeat these patterns of belief and faith and that there should be something rather touching about it. I thought that was quite interesting.”

Within any allegory on faith is the contemplation of mortality. In his 2017 Nobel acceptance speech, Ishiguro spoke of his preoccupation with relationships as a writer. Klara’s relationship with the family is like that of a slave’s; it’s finite, yet she is seeking her own salvation, it seems. Her relationship with the sun is similar.

What that means is not clear to me right now. But both Christian salvation and Buddhist dharma feel wrapped in there somewhere — our finite life, our purpose, our deliverance to become higher beings, better people. In that, Klara and the Sun is an allegory for our better selves.

[Editor’s note: Click here to read the Independent’s review of Klara and the Sun.]

A Trail of Breadcrumbs

Finding my way — with a little help from William Blake.

Anthems for our time, and remembering a hero