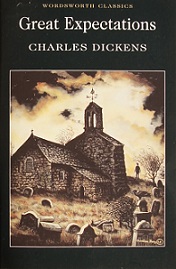 “I had it always in my fancy to surround the lonely figure of a child with grotesque and wild, but not impossible companions,” wrote Charles Dickens in 1848. The “figure” he was referring to is Nell Trent, from The Old Curiosity Shop. But for Dickens, the “lonely child” was a theme he would return to, a haunting narrative kept alive by his lifelong preoccupation with parental desertion.

Thirteen years after these comments, Dickens was back on the subject with Great Expectations, the serialized story of an abused orphan whose destiny to be a blacksmith is redirected by the generosity of a secret donor.

As the novel shivers open, we meet 8-year-old Pip and his first of many “grotesque” companions: in this case, the gravestones of his parents. Less than one page in, and already Pip’s hands are on our hearts, his experience of the world as a confusing mix of wonder and emotional laceration familiar to anyone who remembers childhood.

Pip invokes his elder sister’s saying, “raised by hand” — an expression suggestive of bottle-feeding and surrogate motherhood — as a mantra for the beatings he receives from her. Here, in the literal interpretations of his child-mind, in the painfully sweet way he misperceives the world, Pip draws us to his side.

At the graves, Pip’s musings about the parents he never knew are tender, but also sad and wild, like the churchyard that claims them. This nettle-infested “bleak place” is the gothic primer for the struggles that lie ahead and serves as the perfect setting for that fateful meeting with equally “wild” Magwitch, who intimidates Pip into procuring his next meal.

But it’s at Satis House, another grotesque and wild place, with damaged Miss Havisham and her “sick fancies,” where Pip takes his first real step toward adulthood. Falling instantly in love with Miss Havisham’s adopted daughter, Estella, he sees himself for the first time through the eyes of another, and to devastating effect: “Her contempt for me was so strong, that it became infectious, and I caught it.”

Pip’s stumbling in on another mean world echoes the pivotal event in Dickens’ own childhood, when, at the age of 12, he was sent to work for three months in a blacking factory. Young Charles’ father, John, had fallen into debt and was sent to prison, along with his wife and the rest of their children.

Whether Elizabeth and John Dickens thought they were sparing Charles from something worse by allowing him to work 10-hour days gluing labels on bottles no one can say. But on the subject, there are a few famously known facts: Even after the family was released from prison, Charles’ mother wanted her son to stay on at the factory.

For his part, Charles never forgot about this period of his life, nor would he ever forgive his mother. (Dramatizations of Elizabeth Dickens can be found in Nicholas Nickleby and David Copperfield.)

Thus, Great Expectations has the sensation of being piped in directly from Dickens’ ever-pooling reservoir of sorrow. The story’s central themes spin off from the abuse cycle, which gets driven further into readers’ psyche through elements of horror that storm the novel: the rotted remains of Miss Havisham’s wedding day; Magwitch’s middle-of-the-night footsteps when he comes back into Pip’s life; and even Estella’s ghostly figure in the mist near the so-called “happy” ending — one of two that Dickens wrote.

For Pip, though, the real source of horror is his own pressing anxiety. It haunts him into the self-hating belief that he is at fault for all the wicked events that befall him and the people he holds close. But Dickens knew readers could only take so much. Like his own father, who spared him from additional time at the factory, Dickens gives Pip a countervailing force, a benevolent father-figure in Joe Gargery.

The gentle blacksmith, who marries Pip’s sister and endures her beatings along with Pip, loves the boy first and certainly most — a key force in driving away menacing spirits. But like many young people, Pip won’t be able to see this; at least, not until life humbles him again.

Pip’s emotional journey from lonely child to lonely adult is edged by the physical journey he takes from marshy village to London, and the nonlinear social journey from working-class to upper-class, and then to middle-class. So long as Pip struggles with his class origins, he won’t be able to accept Joe’s love and support.

From the beginning, Pip’s dreams of upward social mobility pit Joe and haughty Estella against each other, prompting Pip to reinvent himself as a scholar. The consequence? A flaring up of mistaken identities.

The surprise allowance that elevates Pip to the level of a London gentleman is erroneously attributed to Miss Havisham, who suffers from once having mistook a conman for her true love. Estella mistakes herself as the empty vessel for Miss Havisham’s deranged teachings, and Magwitch (Estella’s secret birth father) mistakes her for dead. Pip, who learns napkins don’t go into tumblers but not much else, mistakes himself as being above the working-class.

The bildungsroman cycle in Great Expectations is complete upon Pip’s damping down the fires of fakery. Those who can’t live without their illusory selves must flame out, and those who go on living, Pip especially, must cool off and learn to make way without the wistful consolations some call hope.

Or, put another way, Pip must learn to manage his expectations. Indeed, he is never so kind or mature as when he finally parts with the fantasies about what life owes him; for even Pip himself can’t fully live up to the expectations of his benefactor, nor the family-bound hopes of his first teacher and dear friend, Biddy.

By turning the idea of expectations around and asking what type of conduct he expects from himself toward those he loves most, Pip can recover from his childhood and that strange false start in London. Estella will also come to terms, in more brute fashion, with the expectations that were set out for her, the ones she never bothered to question. From here, Pip and Estella might find themselves in good company, after all.

Dorothy Reno is a senior review editor and classics columnist for the Washington Independent Review of Books. Her short fiction has been published in literary journals in Canada and the United States. She lives in Tbilisi, (former republic of) Georgia. If you would like to share your thoughts on Great Expectations, please respond in the comments section of this article. You can join Dorothy in reading Forty Stories by Anton Chekhov (translated by Robert Payne), which will be the subject of her next column.