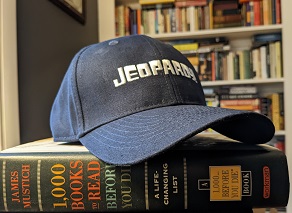 (Warning: The article below contains spoilers about last Friday’s episode of “Jeopardy!” Of course, so does the title above.)

Was I the brightest contestant ever to grace the “Jeopardy!” set? No. Few of my college grade cards were fridge-worthy, I know nothing about geography (wait, there’s a South America?), and my understanding of chemistry and physics extends no further than being able to spell those words. But after a lifetime of reading — weighty books, canonical books, important books, and even some good books — I felt prepared to do well on the show. I expected to do well. I wanted to do well.

We all want things.

As you’d imagine, everybody who makes it to the Nerd Olympics knows lots of stuff. Most of us have spent decades delighting family and friends with our arcane knowledge and imparted bits of unasked-for wisdom. We treat Trivial Pursuit like a blood sport. (Okay, maybe that one’s just me.) And we had to survive multiple auditions to earn a spot on the Alex Trebek Stage and a coveted blue-background photo.

Hence, when it comes to doing well on the show, knowing stuff isn’t the issue. It’s getting asked about the stuff you know. (Working the buzzer correctly is a separate matter that warrants a much longer, much sadder essay.) Since there likely wouldn’t be any categories about Nigel Tufnel, lesser-played Beatles songs, or epic birth-control fails, I was banking on seeing something on the only other subject I’m pretty good at: books.

Alas, after categories like “A Garden Party,” “Stayin’ Alive,” and (seriously?) “Do the Math” left me in third place at the end of the opening round, I knew I’d have to make a move regardless. So, when “2-Word Book Titles” popped up in Double Jeopardy? Hosanna! I was ecstatic. And when I landed on the Daily Double in that category, I wanted to believe it was my chance to prove myself and overtake the 14-day champion currently smoking me and the other player.

Again: We all want things.

“All of it,” I said when Ken Jennings asked how much of my $5,600 I would wager. The audience applauded, appreciating my boldness if not necessarily rooting for me. The gladiator slays the lion? The lion eats the gladiator? To quote Bart Simpson, “Either way, hell of a show.”

As fans know, you get five seconds — with the camera trained on you alone — to answer a Daily Double. The clock starts as soon as the clue is read. Which was when the trouble started, too.

How long is five seconds? Long enough to think, “Oh my God why did I just bet everything on a book question that turned out to be a sports question and now Ken is going to assume I’m an idiot who knows nothing about baseball and why should I care I mean he seems nice but I just met him and this must be how Cindy Brady felt when she was on that quiz show and couldn’t remember Baton Rouge and why am I thinking about 1970s television at a time like this but man that would’ve been a good category and can really nobody but me hear that INFERNAL BEATING HEART under the floorboards?”

How short is five seconds? Short enough that you barely register what a fool you’ve just made of yourself on national TV.

Which is another way of saying it goes fast. Because it does, and it did. After risking and then losing all my money, the rest of the game flew by. I got a couple more answers right, including one about Arby’s — as a vegetarian, I don’t endorse anybody having the meats — and then Double Jeopardy was over. (I thought the producers were exaggerating when they warned us how quickly things move. They weren’t.)

By this point, the game was a runaway. The champ couldn’t be caught, and it was clear I’d studied all the wrong things. With only Final Jeopardy remaining, there’d be no questions about mid-1980s Stephen King ghouls, the effects of Flowers in the Attic on an unsupervised fifth-grader (don’t ask), or which editions of Reader’s Digest Condensed Books contain the smutty parts.

As for Final Jeopardy, I don’t recall the exact question. But it had something to do with the Montana census, which, it turns out, I know even less about than two-word book titles. I wagered everything but a dollar, lost everything but that dollar, and took home the bronze.

Was I disappointed? Sure. (Almost as disappointed as having my episode preempted in DC by college football.) But I was thrilled, too. Being on “Jeopardy!” was a lot of fun, I got to meet the people who run the show (all of whom are as awesome as you’d hope), and my four kids now have a brand-new reason to mock me. Even as a loser, I’m a winner. At least, that’s what my next tattoo is going to say.

And I don’t regret that I prepped for my game mostly by reading. (And not, to my husband’s chagrin, by watching the show while standing in our living room and clicking a fake buzzer. I mean, come on.) Reading is the best thing in the world, and if I had “Jeopardy!” to do all over again, I want to think that’s still how I’d prepare.

But we all want things.

Holly Smith. “Who is editor-in-chief of the Independent?”