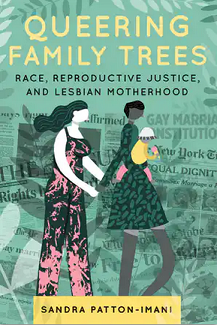 American motherhood is one of those timeless social minefields where traps are laid and navigated not just by mothers, but by political, economic, legal, and reproductive policies. But for lesbian mothers — particularly lesbian mothers of color — parenting collides with oppressions that liberal-equality narratives erase. Queering Family Trees: Race, Reproductive Justice, and Lesbian Motherhood sees Sandra Patton-Imani use her own intersecting identities as an adoptee and an interracially married, lesbian mother for exploring queer motherhood, marriage, and parenting.

Patton-Imani treads where only the daring walk, using adoption and geographical location across the United States as her tools for dispelling the popular notion that gay and lesbian marriage led to equality for queers. She emphasizes race as the reason why so many lesbian parents still experience a precarious motherhood. In Patton-Imani’s view:

“Putting queer mothers of color at the center changes what the story looks like. Focusing on adoption changes our views of same-sex marriage. Paying attention to the politics of welfare and immigration policy provides a broader context for exploring patterns of race, gender, sexuality, and socioeconomic inequalities.”

In other words, like so many other things in the American tradition, what is presented to the average media consumer — an audience Patton-Imani regularly addresses — about controversial social issues obscures the marginalized populations who don’t benefit from a supposed justice-oriented move. What the author reveals in her decades-long research are the tensions hiding behind the celebratory news stories and political ad campaigns championing “equality” for queers when marriage became legalized.

In Queering Family Trees, published last summer, Patton-Imani frames family-making as the act ultimately exposing what same-sex marriage couldn’t fix. More importantly, though, her critique of gay rights highlights the flaws in American family-making. Who gets to be a mother, and why? In championing gay-marriage rights, who still gets left behind?

Citing her own marriage’s legal and political complications, Patton-Imani intersperses her research with pieces of her story: “In getting married, we were not celebrating the new inclusivity of same-sex marriage — we were protesting it, while simultaneously engaging in a compulsory performance of citizenship.”

The “citizenship” to which she refers is one granted to those embodying the white, heteronormative, two-parent, married version of America: It is to those citizens, the author argues, that full citizenship rights are granted. Anyone falling outside of that norm, no matter how legal their union, is still bound by policies and laws that provide legitimacy only to those — including children — inside a male-female marriage.

It’s legitimacy that Patton-Imani focuses on most in her ambitious, anthropological sweep of lesbian and gay marriage and parenting. Chapters are prefaced with milestones in the fight for same-sex marriage, helping readers orient themselves amid the narratives and interviews provided. She also introduces other framings to undergird her central arguments. Though interesting, it’s her focus on legitimacy that best underscores her argument that gay marriage — and gay parenting — was never meant for women of color:

“The terms of legitimacy are deeply racialized. Whiteness is not only represented in these political dialogues as legitimate, but as a legitimating force. Mothers of color are represented as illegitimate and incapable of appropriate socialization. These stories rely on a fictional split between lesbians, who are imagined as white, and women of color, who are represented as straight.”

Patton-Imani’s expansive work accomplishes two things. One, it pushes forward public conversation about adoption. And two, it challenges the state’s role in kinship formation. Is adoption only honorable and valid when done by white heterosexuals? Is lesbian motherhood delegitimized because of deeply ingrained comparisons to white, straight mothers? How does the standard family-tree model — assumed so ubiquitous that it remains largely unchallenged — oppress children and parents not in biological-kinship structures?

Still, Patton-Imani forces readers to acknowledge those who reside just outside equality’s field of vision and those who already existed on society’s margins and find themselves further pushed outside the bounds of acceptance. Perhaps this is the work’s most important takeaway: Who gets lost when equality feels like forced assimilation?

As an openly biased fan of Patton-Imani’s work on adoption and kinship, I’m tempted to recommend Queering Family Trees to anyone who has ever had a mother. Then I realized that people like me, Patton-Imani, and thousands of other adoptees may see themselves as those whose mother-having and mothering status may be legally questionable — or, at best, emotionally fraught.

So, instead, readers may benefit from Patton-Imani’s braiding together of children and lesbians of color to show how their lives and kinship narratives are ultimately part of an insidiously hostile social agenda. By offering an alternative to marriage-equality rhetoric as an end-all, be-all, Sandra Patton-Imani asks readers to help redefine — if they haven’t already — what it means to be an American family.

Sunny J. Reed is a New Jersey-based writer, childhood-studies doctoral student, and aspiring public academic. Her research interests include transracial adoption, racial identity, and the myth of the American family. In her spare time, she enjoys video games, hiking, crocheting, and spending time with her family and overabundance of pets.