There's a lot to love about villains 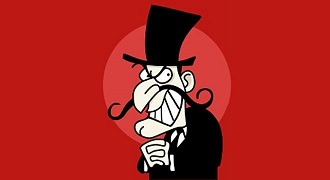 In Shakespeare’s The Merchant of Venice, Bassanio, who, in his quest to woo Portia, borrows money from Shylock, at one point says, “I like not fair terms and a villain’s mind,” which has been loosely translated to mean, “I don’t like it when a villain acts nice.”

Au contraire. Far be it from me to disagree with any statement originating from the Bard’s quill, but I like it when villains act nice. In fact, I find it difficult, if not impossible, to write a thriller or mystery in which all the bad guys and gals are one-dimensional scuzzbuckets.

I’ve always hated books and movies where characters show up as faceless mountebanks and are immediately dispatched (often after being shot in the face), just to show how mean they are and/or how heroic the hero is. Of course, every work has to have a couple of “Star Trek Extras,” characters whose only job is to die, usually quite horribly.

(John Scalzi wrote a hilarious sci-fi novel, Redshirts, about such characters — from their point of view. Once the doomed crewmen figure out they are dependable fodder, they not only stop volunteering for dangerous “away-team missions,” they start hiding from their officers. The book won a Hugo Award in 2013.)

My “good” miscreants are far from pussycats. They do some really nasty things, including pushing a nice old man in front of a subway train, strangling a war hero, poisoning lovers, rubbing out witnesses, torturing people with lighter fluid, and decapitating an obnoxious author (now, who hasn’t wanted to do that?).

I should point out that these things happen in several different novels. (I don’t want the people in white coats showing up at my door.) And I should also note that some of the villains who perpetrated the aforementioned mayhem got their comeuppance. But not all! A few actually proved quite heroic, or at least useful, in the end.

I’m not a big fan of political correctness, so I spread my villainy around: man, woman, straight, gay, person of color (all hues), old, young, Nazi, Commie, Democrat, Republican, mobster, priest, alien. (I kid you not. I’m working on a book with aliens in it; real ones, not the undocumented kind, although my aliens’ papers are also probably fake.)

Now I will admit to a practical reason for making villains interesting.

This may sound self-serving, but it’s true. Fleshing out characters, even the bad ones, adds length to a narrative. I don’t think I’m particularly good at describing things: houses, rooms, furniture, flora — you name it. I also have a tough time describing what people look like, and occasionally resort to comparing them to real people I hope my readers recognize.

In the case of villains, that’s how I humanize and soften them a bit. If your assassin looks like Naomi Watts, how bad can she really be, even if she is garroting someone? Of course, there is a danger in this approach. Times and tastes change. I remember Ian Fleming describing James Bond’s resemblance to songwriter and actor Hoagy Carmichael. Hoagy Carmichael?

I give my favorite villains, whether I kill them off or not, plenty of backstory and internal ruminations. This is easier to do in my third-person narratives, where I can look into everyone’s mind while standing back from the action. (Blood splatter can ruin a nice pair of loafers.)

First-person narratives are dicier since, other than in prologues and similar devices, the hero and the reader only find out how good or bad people are through their actions and dialogue while in the narrator’s presence.

But it can, and should, be done.

People aren’t just one thing. And your characters shouldn’t be, either.

Lawrence De Maria is a former New York Times Pulitzer-nominated journalist who has just completed his 10th novel. All his thrillers and mysteries are available at Amazon or through his website. He would love to hear from you via ljdemaria@aol.com.