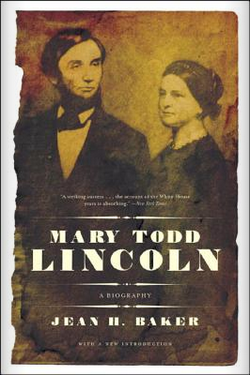 “Mary Todd Lincoln remains America’s most provocative First Lady,” writes Jean H. Baker in the first sentence of her preface to the 2008 edition of her 1987 work, Mary Todd Lincoln: A Biography. Some might dispute her premise of “most provocative” by pointing to Eleanor Roosevelt, Nancy Reagan, or Hillary Clinton, who all managed to set the country’s teeth on edge during their husbands’ presidencies.

Yet, as provocative as they were, none was ever institutionalized for insanity like Mary Todd Lincoln, who was committed to an asylum at the instigation of her only surviving son, years after her husband was assassinated while sitting next to her at Ford’s Theatre on April 14, 1865, “When lilacs last in the dooryard bloom’d.”

By then, the Lincolns had buried two of their four sons, and she would bury a third a few years after Abraham’s death. Her dressmaker, Elizabeth Hobbs Keckley, wrote of the former first lady’s inconsolable grief: “[Her] wails of a broken heart, the unearthly shrieks, the terrible convulsions.” To show such raw emotion was considered unseemly behavior for a 19th-century woman, another blight on a battered public image.

Streaked with tragedy, Mrs. Lincoln, like Queen Victoria, wore widow’s weeds for the rest of her life. With few friends and scant resources, she turned to shamans and seers and spiritualists for emotional support, and to health spas for relief from physical ailments.

As a young woman, Mary Todd was smart and assertive, with a flair for drama. Highly educated, she spoke French fluently and wrote with grace. Born in Kentucky, a slaveholding state, she left her wealthy Confederate family to move to Springfield, Illinois, where she met Abraham Lincoln, whom she shrewdly predicted would become president of the United States.

Unlike other women of her era, Mary was politically astute and relished being her husband’s helpmate in pursuing his career. She continued as his political advisor in the White House, which prompted the men around the president and the male historians who revered him to brand her as “unwomanly.” She was certainly not a woman of her time, which is why Baker describes her as “among the most detested public women in American history.”

Mary Todd Lincoln did not know her place. She was expected to present herself as a demure wife, concerned only with hearth and home. Later, as a presidential widow, she was expected to fade from public view, but she refused. She needed to be acknowledged for herself and applauded as the wife of a great man.

Always in financial straits, she haggled with merchants to get lower prices, frequently refusing to pay. She battled Congress over her pension, fought with her son over her inheritance, and drew national scorn when she offered her extravagant White House wardrobe at public auction to pay off her debts.

In 1996, the establishment of the National First Ladies Library and Museum in Canton, Ohio, convinced Baker that the study of presidential wives had been elevated from its “former status as a frivolous female diversion [to a] legitimate historical endeavor of social, political and cultural importance.” A professor emerita at Goucher College with three published works on the Civil War era, Baker was well equipped, with the reissuing of her biography, to present Mrs. Lincoln with a new feminist sensibility.

Previously, first ladies had been relegated to small dress-and-dish displays in their husbands’ libraries, but now, with their own museum, presidential wives could be considered seriously. So Baker sought to position Mary Todd Lincoln as a victim of unsympathetic patriarchal portrayals, rather than “a one-dimensional human being, a stereotype of the best-hated faults of all women.”

On that, she succeeded. Her well-written biography — with its 2008 updated preface — presents Lincoln in all her messy complexities and confounding contradictions.

Yet reviews were mixed. The New York Times praised Baker’s study as “rich in new research” and “wider in scope than any published to date,” but faulted her for not determining decisively whether Mary was insane and deserved to be incarcerated or merely temperamental and difficult. The Christian Science Monitor applauded Baker for writing an “excellent, enticing book” and turning “biography into social history at its best,” but made no mention of Mrs. Lincoln’s incarceration.

Surprisingly, no reviews of the biography noted the treachery of Lincoln’s only surviving son, Robert Todd Lincoln, who was humiliated by his mother’s public displays and engineered a trial to have her committed. Mary Lincoln managed to prove herself mentally competent and left the asylum, saying she could never forgive her “monster of mankind son,” and would end her days “childless.” Mother and son never spoke again.

Sadly, Mary Todd Lincoln, like King Lear, learned “how sharper than a serpent’s tooth it is to have a thankless child.”

Patricia Bochi begins our fall season of slow reads with The Wine of Solitude by Irène Némirovsky.