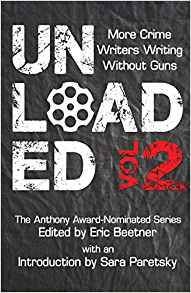 This isn’t one of those essays where writers are discouraged from writing about politics.

I never considered myself a political writer. A “political writer” has always meant — to me —  someone who deems an issue necessary to write about, and that issue steers them through an article, an essay, or a novel.

Maybe that attraction, what we seek when we read, is something we develop as readers, what first draws us to writing. For me, it was characters and prose. The mix of music and math in a beautifully spun sentence. A complex character facing a life-changing choice.

In most cases, the social politics behind a book are in the background — unrealized until I’ve given the book further analysis.

So I hesitated when asked to contribute to volume two of Unloaded, the follow-up to the celebrated anthology of crime-fiction short stories without guns. Neither volume one nor two of Unloaded is an anti-gun book; pains are taken to point out that the book’s message is "pro-reason." The authors, as the publisher's website explains, "comprise gun owners and non-owners, voters on both sides of the political aisle."

I was approached by Eric Beetner — a hardboiled specialist, crime-fiction favorite, and editor of both Unloaded volumes — because he’d read about a shooting that occurred at my son’s daycare. As some readers may remember, last January, a bullet was fired through the window of the room my son was sleeping in.

Eric had a different idea for my contribution. He asked if I’d write an essay about what had happened, which contrasted greatly from the anthology’s concept but was in line with its goal.

Still, I didn't weigh the decision to contribute lightly.

Because this isn’t one of those essays where writers are encouraged to write about politics.

I’ve always felt that writers should be above the fray.

If an angry mob rushes through a town, I believe the writer should perch on a safe rooftop somewhere and scribble down everything he or she witnesses. It’s the Chekhovian approach to writing — just describe the horse thieves and leave it to others to determine if they're criminals.

There's nobility in that idea. And, like a lot of noble ideas, it's somewhat impractical. Impartiality isn't possible. At best, it can be attempted. But should it be? Should we be objective when describing rapists and racists and murderers and caged children? A bullet was fired into my son's daycare. Can I still truly be "above the fray”?

As simple as that question sounds, I don’t know that answer.

All I know is that I desperately wanted to write about what happened, and that Eric’s request opened up something in me that my writing hadn’t yet touched. I only had one agenda in mind, one thing that mattered to me. And that one thing informed the politics of the essay. I felt its power.

I wrote for my son. I wrote so he’d understand what I went through that day, what his mother went through, how our fear lingered. So that, later in his life, he’ll have an understanding of what it’s like to be a parent today, when violence (particularly violence against children) is a prevalent, open, even debated aspect of American society. So he’d know that, when you feel paralyzed by the insanity of what’s happening around you, you still need to talk and march and live and continue.

I wrote because it was one of those essays a writer has to write.

Unloaded Volume II: More Crime Writers Writing Without Guns is scheduled for publication in July and is currently available for preorder. In addition to my essay, there are also contributions from Chris Holm, James Ziskin, Lori Rader-Day, Danny Gardner, and more fantastic writers, including an introduction from Sara Paretsky. All proceeds go to the nonprofit States United to Prevent Gun Violence.

Does it matter where we write?