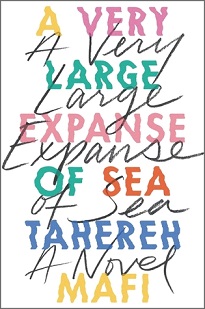 I admit it: I chose this column’s literary focus, A Very Large Expanse of Sea, largely on the strength of its author, Tahereh Mafi. Mafi penned of one of my all-time favorite young adult novels, Furthermore, whose whimsical creativity is truly a thing of beauty, so I was thrilled to discover this 2019 novel based on her own teenage experiences.

(She also happens to be married to Ransom Riggs, the author of another of my favorite YA novels, Miss Peregrine’s Home for Peculiar Children; I’d give anything to be a fly on the wall during one of their dinnertime conversations!)

The only downside of adopting an author-inspired — rather than a book-inspired — strategy was that I had no clear idea, at the outset, what my approach to this column might be. But many of the themes Mafi emphasizes in A Very Large Expanse of Sea, set in 2002, remain pertinent; the prevalence of fear-based, xenophobic racism and the resulting loneliness and isolation, for example, seem particularly salient today.

It’s more important now than ever to acknowledge the value in listening to others and in asking to be heard ourselves. Mafi’s protagonist, Shirin, a high school sophomore whose Iranian American heritage and hijab mark her as an outsider despite her best efforts to blend in, deals with racism on a daily basis. Eventually, having been told repeatedly that she doesn’t matter, she stops advocating for herself and her needs.

While it’s clear the outright prejudice takes its toll on Shirin — one memorable incident sees a fellow student throw a cinnamon bun at her face; taking refuge in a bathroom, she unwraps her hijab to clean it, only to be ambushed by a girl who snaps a photo of her uncovered hair — the less conspicuous effects of being dismissed, discounted, and disdained for so long also weigh on her.

Lately, I’ve thought about the hidden costs of both kinds of assault, the overt and the subtle. In January 2021, NPR announced the results of an investigation that found police officers have shot and killed at least 135 unarmed Black men and women nationwide since 2015. That number, which averages to nearly 20 people each year, is already out of date.

Nineteen of the officers involved in those deadly shootings were rookies; one had been on the job a mere four hours. More than 25 percent of the killings took place during traffic stops; 18 percent of the victims were mentally ill. The heartbreaking statistics just keep coming.

I worry that the senselessness and acute nature of these tragedies keep us from doing anything but triage our horror as we try to cope and carry on. While that’s a necessary part of the process, we need to move beyond this state of perpetual outrage and grief and start intervening earlier, before the attitudes that lead to these catastrophes take hold in the first place.

In a 2019 article in Proceedings of the National Academy of Sciences of the United States of America, researchers demonstrated that positive, door-to-door, nonenforcement police visits substantially improved neighborhood members’ perceptions of law enforcement for up to three weeks afterward (such “community-oriented policing” is endorsed and supported by the U.S. Department of Justice).

What if all rookie officers were required to spend a minimum number of years performing such wellness checks? What if a culture of trust, or at least mutual understanding, could be developed between the police and the people who need their aid the most?

Advocating for an emphasis on mental-health treatment in underserved communities is another way we can begin to stem the tide of police-perpetrated violence and address the factors fueling it. In April, police fatally shot 16-year-old Ma’Khia Bryant, a Black girl, in Ohio. They were responding to a 911 caller who reported an assailant with a knife at a foster home; the few seconds of footage show Ma’Khia holding what looks like a knife and facing another person.

We’ll never know for sure, but such extreme behavior, especially from a girl uniformly described as sweet and loving by family members, suggests a need was not being met. (Ma’Khia had also spent time in the foster-care system, which all too often has traumatizing effects of its own.)

What would happen if we’d sought to address her distress before it reached a fever pitch? If we trained police to address mental-health crises in a nonviolent manner, or even funded task forces whose sole responsibility was to defuse such situations?

I realize these are difficult questions lacking clear-cut answers; indeed, even the fictional A Very Large Expanse of Sea leaves them mostly unresolved. Still, it’s important to keep asking them, keep advocating for others and ourselves, and keep striving to improve the world we’re all a part of. As the inimitable Ruth Bader Ginsburg reminds us, “Real change, enduring change, happens one step at a time.”