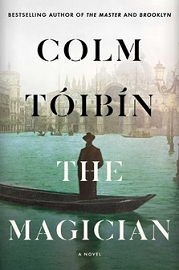 “To be rescued, it will have to be defeated.”
– Colm Tóibín, The Magician

On September 1, 1939, as war broke out in Europe, the Nobel Prize-winning German writer Thomas Mann, who was on vacation in Scandinavia, telegrammed influential Washingtonian Agnes Meyer to help his family escape. She called him immediately. He said, “We need to leave.” She answered, “Leave? You need to be ready to flee at a moment’s notice.”

Meyer succeeded in evacuating the Manns to America. In The Magician, Colm Tóibín’s fictionalized biography of the author, the tense relationship between Meyer and Mann comes to life. A writer and journalist in her own right, Meyer took it upon herself to be Mann’s patron and became obsessed with him.

After he arrived in the United States, Mann was invited by Meyer to stay in her home in DC. Alone with him in her drawing room, she cautioned him not to speak publicly about America entering the war. Roosevelt was seeking re-election (for an unprecedented third term), and the prospect of going to war could complicate his chances. Yet Meyer encouraged Mann to speak freely against the Nazis because he represented Germans like her who stood united against Hitler.

Reading Tóibín and living in Washington myself made me curious about Agnes Meyer. I learned that she was the mother of late Washington Post publisher Katharine “Kay” Graham, so I began to read Graham’s autobiography, Personal History, which won a Pulitzer in 1998. The book is captivating.

Agnes Ernst was born in 1887 in New York and was of German Lutheran heritage. She was a product of public schools and put herself through Barnard College. At a gallery in New York, the financier Eugene Meyer caught a glimpse of her and said to his companion, “That’s the girl I’m going to marry.” He did in 1910. He was 12 years her senior.

Katharine Graham paints a picture of a turbulent marriage between her parents, affected in part by the many men Agnes pursued (Mann being her greatest passion). The Meyers were Washington royalty. As Mann was accepting his Nobel at the Swedish Academy on December 10, 1929, Eugene Meyer was being tasked to steer the U.S. economy out of the Depression following the stock market crash earlier that year.

Meyer served as governor of the Federal Reserve for three years, until 1933, when Agnes lobbied him to buy the Washington Post in a bankruptcy sale. After the war, he was appointed the first president of the World Bank.

Graham’s autobiography paints her mother as brilliant but deeply flawed and self-centered. Kay and Agnes shared a devotion to Mann’s works, which Kay developed as a freshman at Vassar in 1935. Agnes called her own desire for a partnership with Mann “an absorbing if unrequited passion,” believing strongly that Mann exemplified liberal thought throughout the world.

In 1937, at the family’s ranch in Montana, Agnes’ obsession with Mann led to nervous exhaustion, described in detail by her daughter. Her hysteria almost shut her down completely, driving her to drink in bed. Agnes once said to Kay, weeping, “What a terrible world it was in which he was an exile.”

Tóibín gives us Mann’s perspective on events, showing us a belligerent but functional hostess in Agnes, one who steered Mann with an iron fist and who lacked subtlety. When she delivers him out of Europe, the fictionalized Agnes says, “Do not continue ignoring me.” When she oversees his speeches, she points out that German Americans were fearful of suffering a similar fate as the interred Japanese Americans and wanted no doubts about their allegiance.

In some ways, Agnes was a political maverick, a knowing, influential humanist who saw the power of Mann as an anti-Nazi tool she could wield for the greater good. Mann owed her his freedom. But he was cold to her and generally ungrateful, saying he felt an “almost uncontrollable desire to give this woman tyrannizing me a piece of my mind.”

Whereas Tóibín paints a humorless Mann who does not get Agnes’ jokes, Graham quotes Mann’s letter to Agnes saying, “You did not have the humor, or respect, or the discretion, to take me as I am. You wanted to educate, dominate, improve, redeem me.” Mann was complicated, to say the least. He was gay but married to a woman, Katia, and had six boisterous children. He lost his sister to suicide, and two of his children also ended their own lives. He did not attend his eldest son’s funeral.

Whatever the chief and minor flaws of the players in a particular drama, it’s evident that writers and journalists sniff out the blood of authoritarian politics and propaganda more quickly than others. They are witnesses to and chroniclers of the maiming of truth. Mann and Meyer, the writer and the journalist, at opposite sides of the Atlantic, had a growing understanding of what was coming for Germany. “To be rescued, it will have to be defeated,” a fictionalized Mann declares in The Magician.

The warning shots are everywhere in our current time, the eerie similarities of a post-pandemic world with high inflation and a war again in Europe. When the Washington Post covered the January 6th Insurrection — eventually winning the 2022 Pulitzer for public-service journalism — it honored the legacy of those seekers of truth who stand against propaganda. For all her flaws, Agnes Meyer was in many ways a truth-seeker herself and is the hero of Tóibín’s novel. And in it, Mann finally gives Agnes her due:

“In the future, he thought, perhaps when this war was over, women like Agnes would have more power…[and] run the world.”

Reading tips, apps, and so much more