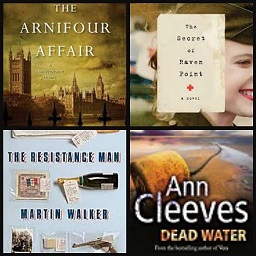 Technically, this is still a mystery debut since her first two books were novels. I really wanted to love this book. It received advance praise from many of my colleagues and has a fabulous engaging cover and a great premise. Juliet Dufresne is a high-schooler who likes science instead of boys. In 1944, her brother enlists in the U.S. Army and is sent overseas. Soon he is declared missing in action, and Juliet lies about her age in order to enlist and find him. After training, she is sent overseas with the medical corps where she does everything, and I mean everything, possible to locate him, including being stationed where he was last seen and querying everyone about him. Juliet meets an older married psychiatrist assigned to her unit to interview a special patient suffering from battle trauma. Turns out the patient knew her brother very well but cannot, or will not, speak. Juliet continues to pursue the case despite criticism. Ms. Vanderbees’ descriptions are harrowing as only well-written war fiction can be, but I found the story a bit unrealistic. Could Juliet move freely about the hospital and really get away with all that she does? And one more problem, I never did discover the secret of Raven Point. Maybe you will. If so, please email me.

I picked this one up for two reasons: I love turn-of-the-century London and it sounded like a unique story with overtones of Sherlock Holmes. I was right. It is also a ground breaker in one respect. But first, the story. Well-born, charismatic Colin Pendragon and his working-class partner, Ethan Pruitt, are private investigators. Lady Arnifour appears at their doorstep, alights from her carriage, and asks for their help in discovering what really happened when her husband was beaten to death and her niece left to die on their own estate. The police have their sights on her groundskeeper, but Lady Arnifour wants another opinion. The mystery is extremely well done, the characters carefully drawn, and the story moves quickly to a satisfying conclusion. Why is it groundbreaking? Pendragon and Pruitt are gay. Not in a flashy, in-your-face manner, but casually, lovingly gay. They enjoy one another’s company and they work extremely well together. I look forward to more of Pendragon and Pruitt’s excellent adventures.

Sorry to see the conclusion of Downton Abbey Season 4? Well, here is a morsel to get you through a long afternoon. Set in 1890s Gilded Age Newport, Rhode Island, at one of the “cottages” (read: 20 bedroom mansions) of the Vanderbilt family, this debut mystery gets most everything right. Emma Cross, the heroine, is half Vanderbilt, half commoner, and all sleuth. Emma, a second cousin to Cornelius Vanderbilt, is invited to attend one of her cousin’s grand parties. A reluctant attendee, she sneaks a breath of air outside and is witness — with her eyes and ears — to a crime. She suspects her usually inebriated brother, Brady, is involved. Then she discovers Brady in the room with the dead body of Cousin Cornelius’ financial secretary, along with the possible murder weapon, and sets out to discover the truth, hoping to clear Brady’s name. Along the way, she hooks up with helpful allies and relatives. The period detail is well done. I would have liked more of the “downstairs action,” but there is plenty of the “upstairs” variety. Emma is fun, liberated, and plucky. She knows the seedy side of town and the servants as well as their masters. Her Vanderbilt relatives are done up properly. Not too snooty, with just enough humanity for us not to be turned off by their incredible wealth. Brew some Earl Grey and settle down with a scone with this one.

Now for two pros at the top of their game…

Ann Cleeves didn’t become an international sensation with her debut, a tiny bird-watching mystery in 1986, Bird in the Hand. Fast forward to 2006. She wins the British Golden Dagger, the largest crime-writing prize, forRaven Black, the first of her books in the Shetland Island series, featuring Detective Jimmy Perez. Perez’s ancestors, tradition says, arrived with the Armada from Portugal. From the first page of the first book, I was caught, so obsessed was I with her description of these far-flung, isolated islands. Ann came on as a cook at the Bird Observatory on Fair Isle, where she met her ornithologist husband. She had no idea how that experience would lead to international fame, awards, and a major TV show for the BBC (“Shetland”). She now presents Shetland number five, and it is pitch-perfect.

There is one flight a day from the mainland, although it is often cancelled due to fog and wind. On one morning flight, Detective Inspector Willow Reeves arrives from the Hebrides to take over the murder case of a female journalist found dumped in a boat. Perez is on leave, putting his life back together after to the truly traumatic death of a loved one. Leave or no, given his intimate knowledge of the islanders, Perez can’t stay out of the case. The investigation gets murky, as it seems to involve the gas and oil industry of the Shetlands and possible police corruption. Suspects include a good share of island visitors and residents, including Perez’s own supervisor. All of Ann’s books are dark, disturbing, and deeply psychological, reflecting the occasional dark, often Nordic moods of the islanders, especially those of Perez. But when the sun breaks out, all is illumined, including mysteries of the human soul and why folks remain on these islands.

Three years ago, I was introduced to Martin Walker’s Bruno series by a customer who said I had to read them. What treasures these books are. Set in the Perigord region of southwest France, filled with prehistoric caves (Lascaux) and medieval castles, they feature Bruno, a former soldier who served in Bosnia. Bruno has come to find peace and rewarding work in the small village of St. Denis. Martin returns to a theme he used in his first book, Bruno Chief of Police — that of the long reach of World War II history and its continuing effects on modern France. Although the soldiers are now in their 90s, the official remembrance days of those events bring strong emotions to the village.

When an elderly veteran is found brutally slain in his house, clutching Vichy bank notes connected to a 1940s train robbery, a photo of a sports team in the house leads Bruno to investigate the victim’s ties to Algeria. The village is torn apart by the death. Then another body is found in a gite — or rental home — and minor burglaries are reported. Bruno’s on-again, off-again love interest, the ambitious Detective Isabelle of the Police Nationale, arrives to help, but she only adds to the tension, since her assignment reflects the high priority of the political involvement from Paris. Bruno must use his skills and local knowledge to keep the lid on the investigation and return St. Denis to normal.

Bruno’s charm comes from his daily routine: partnering with other local gendarmes and his friend, St. Denis’ mayor; sheltering and protecting the village from harm; saving the youth from crime by coaching rugby and tennis teams; treating his friends to incredibly mouthwatering alfresco dinners, complete with homemade wine, cheese, bread, pork and chicken from his farm, and truffles from the woods; and romancing women young and old, occasionally while riding horseback. But like many police chiefs, Bruno is on duty 24/7. The job allows him to remain in his beloved St. Denis. So, somehow, Bruno ties up all the loose ends in the present and the past and returns the balance he seeks. Isn’t that the reason we love mysteries?

(Martin Walker is a former Guardian reporter who now works for a DC think tank and has a house in the Perigord region of France.)

Kathy Harig retired in 2001 after 28 years as a branch manager with the Enoch Pratt Free Library in Baltimore. In 1991, she founded Mystery Loves Company Booksellers. Located originally in Fells Point, the store’s current home is a restored bank building in the waterfront town of Oxford on Maryland’s Eastern Shore. Kathy also has a weekly radio program on WCEI 97.6 FM. She is the author of Libraries, The Military and Civilian Life.