The World of “Cli-Fi” 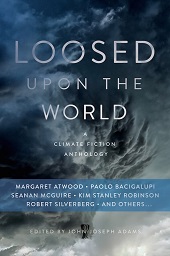 “Welcome to the end of the world, already in progress.”

This dystopian manifesto is the way John Joseph Adams introduces a new anthology of climate fiction, or “cli-fi,” an emerging literary genre that is trying to bring the reality of climate change home in a way people can understand.

“It’s hard to imagine how a two-degree increase in the average global temperature could possibly affect you or me, or why a three-foot rise in sea level would matter to someone who doesn’t live on a coastline,” Adams writes in the introduction to Loosed Upon the World: A Climate Fiction Anthology, which he edited.

“Fiction is a powerful tool for helping us contextualize the world around us,” Adams says. “By approaching the topic in the realm of fiction, we can perhaps humanize and illuminate the issue in ways that aren’t as easy to do with only science and cold equations.”

The short stories collected in this anthology portray near futures that are unremittingly grim, often brutal, and pretty final. Adams isn’t kidding about the end of the world.

The authors represented, such as Paolo Bacigalupi and Margaret Atwood, have also written novels depicting climate catastrophes at greater length and in horrifying detail.

Bacigalupi’s most recent novel, The Water Knife, expands on a story in the anthology portraying a Phoenix deprived of water at war with a Las Vegas that is hogging the flow of the Colorado River in a world where interstate travel has been banned and Texans are the ultimate refugees because that state has no water at all.

It is a world closer to Mad Max than our present day, but whereas earlier dystopias depicted worlds devastated by nuclear war or viral pandemics, this new genre focuses on climate change as the primary cause of destroying life as we know it.

Bacigalupi’s debut novel, Hugo Award winner The Windup Girl, relies on both plague and climate to create a dystopia. Other notable catastrophe novels, such as Cormac McCarthy’s The Road and Emily St. John Mandel’s Station Eleven, portray worlds depleted by other types of extinction events but also suffering the effects of climate change. A more recent book gaining much attention, The Mandibles: A Family, 2029-2047, by Lionel Shriver, shows the effects of climate change but focuses on the collapse of the financial system.

There is little point in trying to delimit what constitutes cli-fi, or debating whether it is a sub-genre of science fiction or a class of its own. And it is questionable whether we need our top literary talents contributing to this genre, as Amitav Ghosh argues in The Great Derangement, or if lesser writers can help us picture what the future holds for our world if manmade climate change continues unchecked.

Some novels that are less ambitious or diluvial can also be harrowing. We Are Unprepared by Meg Little Reilly depicts a rural Vermont awaiting a perfect storm that will bring flooding and freezing never before experienced even in this New England environment.

As with any good dystopian novel, the drama here comes from how people react to the catastrophe, and in this case, the preparation for the storm and its arrival test the marriage of the protagonist and a way of life cherished for generations.

Likewise, The Sunlight Pilgrims by Jenni Fagan is mostly about the anticipation of a looming catastrophe as the calming of the Gulf Stream promises to bring plummeting temperatures, monumental snow, and calving icebergs to the western coast of Scotland.

These novels may not be as brutal as The Water Knife, where a ruthless water enforcer is the hero/antihero, and show more intimate, tender moments that we can all relate to. But don’t be fooled — the outcome is equally grim.