The Wild, Wild Will 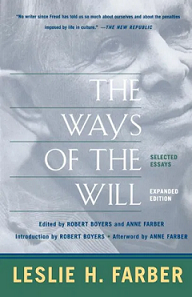 The word “sacred” doesn’t come up much in Leslie H. Farber’s collected essays, The Ways of the Will. Perhaps it need not. Perhaps it’s best suited as the silent partner to the book’s more explicit stars, the quotidian and psycho-philosophical configurations Farber fixes his gaze on, including the will, talk between two people, truth, and despair.

Farber’s psychopathology of the will emerges here through 13 essays (written in the 1960s and 1970s) that propose a hefty yet courtly revision to all of 20th-century psychology. To Farber’s mind, Freud’s “libido,” Jung’s “collective unconscious,” and Harry Stack Sullivan’s “anxiety” are but manifestations of human will — willfulness — called by the wrong names.

The will, which Farber defines as “independent personal volition,” is the prime mover of the psyche, a force he believed to be both accountable and responsible within human relations. As overt understandings of the will were banished from psychological theory, an interesting thing happened, according to Farber: Willfulness (in collusion with other cultural factors) became a treasured American trait. He writes:

“I would call this the Age of the Disordered Will, and I would do so because it seems to me that we increasingly apply the will of the second realm [what moves us toward a particular objective] to those portions of life that not only will not comply, but that become distorted — even vanish — under such coercion.”

In one of his more quoted passages, he continues:

Essay by essay, Farber identifies the junctures of unrestrained will across various avenues of life: willfulness as it pertains to family, envy, even death. (He notes with sly wit that death’s indifference to human will is resolute.)

And while remarking that sex is especially vulnerable to the machinations of the will, Farber’s thought is at its sharpest and most theoretical when he writes about will and anxiety. The latter, he argues, plagues us most relentlessly when we’re in a state of attempting to will elements and events that are impervious to our desires.

In therapy, will sometimes pops up under the banner of “epiphany,” an experience Farber finds dubious for its tendency to reject ambiguity in favor of what he terms “gnostic certainty.” In his world, meaning is paramount, and he maintains we find it by searching for truth. That is, by taking a fearless inventory and not assigning particular life events more weight in a bid to throw off (or increase) anguish for aesthetic effect.

In a devastating essay about Harry Stack Sullivan (Farber’s mentor), he sticks with the theme of ambiguity, showing how to nourish our lives by not “uglifying what was difficult.” What does Farber have to say about the professor whose calculated manipulations (harassment, really) nearly drove him to quit psychiatry? “That I do not share Sullivan’s regard for the educational virtues of anxiety may color my view of our time together — a time which, despite my constant discomfort, I certainly do not regret or find useless.”

Later in the same essay, Farber flexes his visionary prowess by pinning Sullivan down as an American “type” still prevalent in the culture today:

“What of Sullivan himself? Was he in some way a fitting exemplar of this very home-grown doctrine? Indeed, in every way. Uneducated, uncultured, untrained — he had risen to the top of the heap on verve and mother wit. He was living proof that in America anyone — given the gumption — could do anything. Become President [emphasis mine], write the great American novel, make a million dollars, become a famous psychiatrist and hoot at Freud. Of course, it would require gumption [read: will]. But what was plentiful in America if not gumption?”

And what of Leslie Farber’s gumption? It seems he hadn’t much need for it. Born in 1912 into a culturally vibrant Jewish family (his father was a refugee from Russian Poland), Farber grew up playing music with his two brothers and later attended medical school. Later still, he specialized in psychiatry and trained with the most eminent American therapists of his time.

He joined the armed forces, rose quickly, then left. He married and had a son; he divorced, married again, and had three more children. Most of his career was spent as a psychotherapist in private practice, but he also chaired the DC School of Psychiatry and, for a time, was director at the Austin Riggs Center. His work was published in a variety of venues, including the Atlantic. He was friends with the theologian Martin Buber, whose philosophy of dialogue had a profound impact on the way Farber practiced therapy.

Farber died in 1981, when I was just over one year old and living in Canada. Suffice it to say, our paths never crossed. It was the essayist Emily Fox Gordon who brought him so powerfully to life for me in her 2010 collection, Book of Days. In the late 1960s, not yet out of her teens, Gordon was sent to Austin Riggs. She writes:

“I knew instantly that Dr. Farber was a different kind of being from the other therapists. His was not the neutral watchfulness I had become so used to; he judged and revealed his judgement. This was striking enough, but it was really just the first layer of my reaction. I think I also sensed, if obscurely, that he was a person whose way of looking at the world — unlike that of any therapist I had encountered — was integrated with, and undetachable from, his self.”

One gets the same feeling reading The Ways of the Will. Farber’s use of words like wickedness, confession, forgiveness, repentance — even salvation — can hardly be mistaken for careless religious metaphors in an otherwise secular body of work. He believes in moral absolutes, but he complicates those convictions with irreverent humor and softens his positions by volunteering less-than-flattering personal anecdotes, such as the time he willed his own bad-faith epiphany during a therapy session.

But there can be no mistaking these essays for having a secret, proselytizing agenda — or any agenda at all beyond handling existence with care by thinking about it as clearly as possible. If Farber quotes Buber, T.S Eliot, and Kierkegaard, he also leaves space and admiration for Nietzsche.

On the matter of faith, he offers this open-ended poetic: “So, if I’m asked, ‘Is this religion?’ I must answer that I doubt it. Conversely if I am asked, ‘Isn’t this really an admission of your lack of faith?’ My answer is the same: I doubt it. The verdict, I hope, will be indefinitely withheld.”

Whatever private religion Farber may have harbored was leakproof against sentimental views of the afterlife and everything else. He answers Dr. Elisabeth Kübler-Ross’ claims about death as an “ecstatic transition” (via near-death experiences) with this cheeky crack: “Perhaps those who have found death disagreeable have not yet come forward to tell their stories.”

Does all this sound bleak? It isn’t. Farber’s readers are left with a little recipe for escaping despair, however temporarily, in his “mutuality.” That is, by connecting through “talk” with people who’ve undergone deliberate consideration of their standing within the human order. (They exist, trust me.)

The joy in reading Farber is in the way he keeps his eyes open to offerings as they appear — unpredictably, of course, and of their own mysterious volition: “There were times when the most perfunctory and public type of encounter gave way to a friendly and forthright moment which quite transcended what came before. There were gestures of kindness which I neither earned nor anticipated.”

I’ve come back to this book more than any other in my life. I do so because of the sublime, almost heartbreaking way Farber writes, and because of the way he nudges me to shed my feeble consolations. What I find most in The Ways of the Will is the daily bread of the real — a concrete but indeed sacred encounter with a rare master, a reluctant teacher of true critical thought who deserves the final word:

“What is it we think of, when we think of ourselves and the time — and the times — that are gone? We want: to have lived honorably, to have mattered — to our time and to one another, to have had meaning…we want, we want; meanwhile the potatoes are burning and the gas man is here to read the meter. What…life teaches us about time is that it goes — that what it brings or gives or permits it also transforms or hardens or takes away. We learn that…what endures, in joy or grief, is seldom what we knew or chose.”

Dorothy Reno is a classic-books columnist for the Independent.