The Weasels of Wall Street 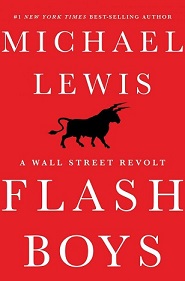 Reading Flash Boys: A Wall Street Revolt, Michael Lewis’ frightening dissection of Wall Street avarice (forgive the redundancy), I thought about the scenes in “The Godfather” where Corleone family lieutenant Pete Clemenza discusses going “to the mattresses.” To Mafia thugs, that meant hiding out in rented rooms until the dust settled in a mob war.

But if Lewis is right about what Wall Street is like, going “to the mattresses” would seem to be good investment advice for the rest of us. Because under a mattress is where anyone with an ounce of sense would put his or her money.

There is another eerie parallel with mob mantra. When Michael Corleone worries that his planned assassination of Virgil “The Turk” Sollozzo will start a mob bloodbath, Clemenza consoles him by saying that the inevitable fallout is normal.

“These things gotta happen every five years or so — 10 years — helps to get rid of the bad blood.”

If only that were completely true for Wall Street miscreants. Sure, after every meltdown, scandal, scheme, collapse, etc., a few go to the slammer or are “barred for life from the securities industry” (in effect, barred to retire on their private islands in the Caribbean).

But most don’t pay the piper. Then the old “bad blood” is reinvigorated by a transfusion of new “bad blood,” and the schemes, perfected by advances in technology, are updated and refined.

Clemenza would have had a freakin’ cannoli.

The heroes of Flash Boys are traders and computer nerds who separately realize that certain High Frequency Trading (HFT) firms have rigged the stock market so they know who is buying a stock before anyone else. By trading on that information, the firms can buy the shares first, then profit on a price rise when the other orders hit. This is called “front running” and, as a form of insider trading, is as old as the Battle of Waterloo in 1815, when Baron Rothschild made a killing because he knew Napoleon was defeated a few hours before everyone else found out.

I presume the baron’s agents used a carrier pigeon or a high frequency horse (HFH).

As Lewis points out, front running is illegal — except when it’s done because your computers are faster than anyone else’s! How is that possible? Well, it seems that there is the speed of light, and then there is the speed of light. In other words, if your fiber-optic cable goes in a straight line, say, from Chicago to New York, rather than being routed around, say, those darn Allegheny Mountains, stock trading information will get to an HFT computer a couple of nanoseconds faster.

How fast is a nanosecond? Blink your eyes. A nanosecond is about 200 times faster.

Now, would anyone spend tens of millions of dollars to blast through the Allegheny Mountains just to gain those nanoseconds? Well, the HFT firms could, and did.

How nuts is this? Well, several years ago, Chris Christie, the governor of New Jersey, pulled the plug on what most people believe is a crucial rail tunnel under the Hudson River. So, a tunnel that would have carried passengers and freight and presumably led to economic development was deep-sixed, while a tunnel that allowed HFT firms to skim billions from the stock market got all sorts of approvals. (Now, I’m not saying Christie had anything to do with the fiber-optic tunnel. But he does seem to have problems with bridges and tunnels.)

The fiber tunnel aside, the HFT boys constantly refined the process, by placing their computers closer to the stock exchanges (again, a straight line is always better), shaving another nano or two off the order transmissions.

How did they get found out? Well, some traders representing large institutional investors would place a stock order at a certain bid-and-ask price and then watch the figures on their computer screens change at the exact moment they hit the “buy” button. In other words, the HFT crowd saw those orders in real time, and their two- or three-nanosecond advantage allowed them to buy ahead of the poor shmuck who thought his trade was instantaneous. (Listen, I think I explained this right. Anyone else want to take a shot?)

Now, some people argue that the HFT firms are just legally gaming the system and only make thousandths of a cent off each stock. (But these nano-pennies add up when you’re talking billions of shares.) And they also point out that big Wall Street firms, the ones getting burned by HFT traders, have long run their own dark pool or black pools (private trades of securities offered outside such exchanges as the New York Stock Exchange and NASDAQ) so that the trades are hidden from the general public. Such pools destroy market transparency. (There is something called a “grey pool,” too, but I’m trying to keep my sanity here, so enough of this.)

In Flash Boys, Lewis explains that Brad Katsuyama, an obscure trader at the Royal Bank of Canada, figures out what is going on and puts together a team of other mainly low-level Wall Street employees to fight back. They create their own electronic stock exchange that big investors — who don’t really have a clue how their own trading systems work — can use without worrying about HFT depredations.

This is basically where Lewis loses me in techno-jargon, but that doesn’t really matter. By this time, the reader has the picture. Any market so fragmented and run by people who barely understand what their subordinates are doing is basically flawed.

Flash Boys is not without its own flaws. It’s a bit hard to keep all the players straight. And forget about understanding most of the strategies, terminology, and computer gobbledygook used by the financial sharpies. Wall Street would go belly up if people could figure anything out. But Lewis, bestselling author of Liar’s Poker and The Big Short, manages to keep the insanity to a minimum.

Oh, yes, someone does go to jail in Flash Boys. Serge Aleynikov, a Russian immigrant working for Goldman Sachs, was sentenced to eight years for “stealing” some basically obsolete computer code (he emailed it to his home computer and didn’t try to profit from it).

It is likely Goldman, battered by HFT trading, overreacted; the code was apparently useless outside its own systems, and Serge didn’t even bother looking at it for a month. It seems clear from reading Lewis’ account that no one involved in the case — the F.B.I., the prosecutor, the judge, the jury — understood what Serge did, but they had to convict someone.

But as Lewis notes, “the spider always eat the fly” on Wall Street.

[Enter to win a signed copy of Michael Lewis’ Flash Boys by signing up here by Wednesday, July 2, 2014.]

Lawrence De Maria is a former New York Times Pulitzer-nominated journalist who has just
completed his 10th novel. All his thrillers and mysteries are available at
Amazon or through his website. He would love to
hear from you through his site or via ljdemaria@aol.com.