Even half a century later, dramatic events during the New Frontier days of the Kennedy administration continue to capture the public's interest — the Cuban Missile Crisis and, domestically, the war against organized crime and racketeering and the civil rights revolution, much of which was overseen by Robert F. Kennedy. As the president's brother, RFK was a uniquely powerful attorney general.

These subjects have generated considerable attention through the years and will continue to as history evolves and new information appears. The other subject that won’t go away is the assassination of John F. Kennedy, which ended his regime and stunned the world. There are those of us who believe the assassination was payback for RFK’s battles against organized crime.

I was a prosecutor in RFK's organized-crime section throughout his four years as attorney general, and I wrote about our group’s work years ago in my book Perfect Villains: Imperfect Heroes. Interestingly, at the time that I contracted to write an earlier book (Ransom: A Critique of the American Bail System), which was published in 1965, soon after I left Justice, I discussed with Ed Doctorow — then an editor at Dial Press — whether I should write the Kennedy Justice book then instead.

He advised that I wait until the passage of time provided a better vantage point and a cooler perspective. I thought his advice was questionable (though I did follow it) because I had recently left the Justice Department, and the facts and records were fresh and the key people were easily available. Thirty years later, when I did write the Kennedy Justice book, I discovered things I didn’t know earlier because congressional investigators had disclosed facts that even insiders did not know. Doctorow was right.

I have read most of the literature about that era and those particular events, so I read Vendetta: Bobby Kennedy Versus Jimmy Hoffa, by James Neff, curious to learn if it was as revelatory as its advertisement promised. It isn’t. I saw nothing new here that hasn’t been chewed over by supporters and detractors of Robert Kennedy’s attorney generalship. 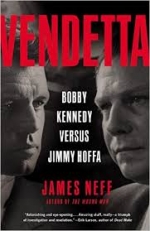 There is considerable agreement that RFK came reluctantly (and without experience) to the job, but that he grew into it to become a major national figure. With the help of estimable assistants he appointed and supported, he ran an active and successful department, especially in the areas of civil rights and organized crime. Alexander Bickel, who criticized Robert Kennedy’s appointment as attorney general, wrote later that “it was the most brilliantly staffed department…very impressive.” Neff's book doesn’t alter that conclusion.

It does raise an important issue that was debated throughout the years of the Kennedy administration, though: whether it is appropriate for an attorney general to focus on pursuing a class of prosecutions as RFK did with organized crime and union corruption (Jimmy Hoffa and the 1.4 million-member International Brotherhood of Teamsters being the ultimate, but not the only, example of the latter).

It was a fair question then, and it is now. Should attorneys general come to office with an agenda, or should they limit their priorities to what chance demands? Was it wrong for the present Justice Department to focus on police misconduct when that subject arose and demanded attention? Or for recent departments to focus on terrorism when that subject demanded attention? I think not.

Robert F. Kennedy came to his attorney generalship knowing about the evils of organized crime and labor racketeering as a result of his experience as counsel to an earlier Senate investigation (known as the McClellan labor and rackets subcommittee) on that subject. Why wouldn't he bring that experience to his later role at Justice?

Under his administration, the Justice Department downsized and eventually eliminated an existing and moribund section on internal security which had exhausted its warrant after the anti-communism era waned, and upgraded a then small and insignificant organized-crime section. RFK made comparable changes with the civil rights section, elevating its staff to a division to meet emerging demands created by events occurring on the streets of America. That's what good executive departments do: They come with personal expertise and incentives and move with the times.

Hoffa was a larger-than-life figure, and it was understandable why RFK's department’s work would be personified publicly by the notorious personal antagonism between him and Hoffa. Washington investigative reporter Dan Moldea wrote a major book about Hoffa years ago. That story is now well known, and Vendetta doesn’t add to it. Juries Jimmy Hoffa couldn’t fix convicted him, and eventually he was sent to prison. Kennedy was right to pursue corruption in national unions. Years later, after he was pardoned by President Nixon, Hoffa was killed by thugs who were never caught.

We were meeting with Robert Kennedy in his office the morning of the assassination, discussing proposed prosecutions of major rackets figures. After the assassination, Kennedy’s work personally leading the charge against the rackets ended, and not long after, he left the department.

Hoffa was connected with the Mafia characters we were pursuing avidly and successfully. Persuasive books point to a conspiracy by mob leaders Santo Trafficante Jr. (one of these books was authored by Trafficante’s attorney) and Carlos Marcello to kill the president and end our work harassing them and their criminal colleagues.

After the killing of the president, evidence disclosed that Hoffa assured Marcello that he would then be receiving the pension loan he promised. Marcello told a prison mate (bugged by the FBI) that he arranged the assassination. Author Lamar Waldron has documented that event with Thom Hartman in their book, Legacy of Secrecy.

The literature about the assassination is vast and may never end with the complete agreement of historians. One recently self-published (Lulu) book, He Was Expendable, by James Kelleher, collects the extensive literature confirming the conclusion of the House Assassination Committee and others that what we were doing in the Justice Department was the motive for the president’s assassination. Washington journalist Jefferson Morley edits the website JFK Facts, that collects and fact-checks ongoing research on this subject.

Vendetta summarizes but doesn’t add new evidence to the history of that exciting time, nor about the riddle surrounding the inextricably related assassination. Its publication does, however, confirm that these questions continue to interest the public. And those who don’t know and have not followed this story will find it interesting.

Celebrating one of DC’s finest journalist-authors