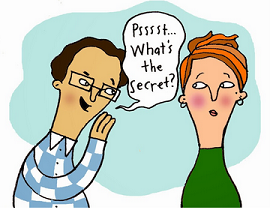 Before I got married, I was dating (and I use this term loosely) a guy who fancied himself a real operator. He owned a retail boutique that sold cowhide rugs and handbags. It was, he reminded anyone who happened to wander in, not a shop that sold things made from cows, but instead, a “lifestyle” brand.

Mostly we just hung out at his lifestyle shop and drank cheap wine. But occasionally, we’d venture out on Monday nights for half-price burgers and pints at a restaurant in Georgetown near a movie theater.

“I want to go see this movie about a guy who closes business deals,” he said one night. “It’s called ‘Closer.’”

“It’s pronounced closer,” I corrected him, pronouncing the word with a soft “s” instead of the “z” he’d used.

For the rest of the time we were together (which wasn’t long; ultimately, he didn’t want to get closer to me), I brought up his blunder at every opportunity. I told mutual friends. I even told my future husband. Sixteen years later, it’s the homophone that keeps on giving.

I was thinking about this recently when I was asked to speak to a college English class. It was the final class of the semester, and I’d already spoken in two other such classrooms that week. My task: to discuss making it as a writer in the real world.

It got me thinking. Am I some sort of secret weapon brought in to give students a pep talk on the last night of the semester? A cheerleader armed with writerly wisdom instead of pompoms?

Yes to all of that. And so, I thought I’d impart some of that schoolhouse know-how here — just to get you closer to closing your own deals.

Once you’re out of your school bubble, form another one. Whether it’s a writers group or just a like-minded buddy, be accountable to someone. Give each other deadlines and goals. And then show up. (It also helps to have a few readers — those who understand your intent and don’t try to mold your work into something they would do.

Be curious — and carry a notebook. Write down overheard snippets for future dialogue. Shake hands with anyone doing anything interesting. They may become your next profile subject. In other words, get out there in the world!

Read where you want to be. When I was first starting out as a freelance writer waaaaay back in the 1980s, I discovered a magazine that would change my life. The pages of Sassy were filled with writing that spoke my language. Conversational, friendly, funny, candid. I mean, where else could you find a column called “Cute Band Alert”? Even though I was relentless with the editors there, I never made it onto the pages of Sassy. So, when I set my sights on O, the Oprah Magazine, I read and studied it. What was the typical wordcount? What was the voice? What stories did they cover? Before long, I had my first byline in O, with more to come.

Bum in chair. There’s no secret to writing. The more you write, the better you get. Whenever I’d complain — about backaches, stiff shoulders, writer’s block, whatever — my accountability partner would repeat this mantra. It turns out I was more afraid of her disapproval than of the blank screen. (The other aphorism that comes to mind: Don’t get it right, just get it written.)

Learn how to craft a pitch. Start your pitch as if you were writing your piece. “Cathy Alter enters the room like she owns it. She moves confidently to her seat but before she sits down, she takes the scarf from her neck and uses it to discreetly brush crumbs off her chair.”

No first drafts. Turn in work that’s polished, spell-checked, scrubbed of cliches, and on time. Respond to edits quickly and quietly, but when you need to, pick your battles. Honor deadlines. Editors move around from publication to publication and remember their favorite freelancers. Those long memories are how I ended up getting to write for superstars like Dave Eggers and Larry Smith and for dream publications like O and WIRED.

Keep these tips in mind, and who knows? You just might become the writing world’s next closer. The kind you pronounce with a “z.”