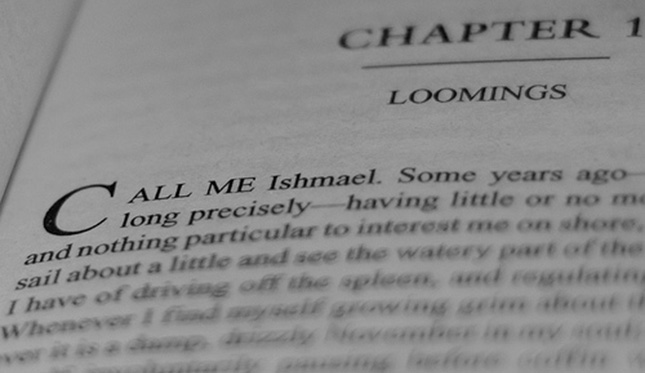 It could be the moon, the weather, the house, the movement, the manner or the name. Maybe the voice and/or the speaker, but something about the beginning moves you forward and you want to know what happened, how come, why and why not and in order to find out, you must read ....

Here are 23 of the best opening sentences from Pulitzer Prize winning novels. The date behind the author’s name is the year that each book won.

2) “He was an old man who fished in a skiff in the Gulf Stream and he had gone eighty-four days now without taking a fish.”
The Old Man and the Sea, Ernest Hemingway (1953)

3) “We are talking now of summer evenings in Knoxville, Tennessee in the time that I lived there so successfully disguised to myself as a child.”
A Death in the Family, James Agee (1958)

4) “Sam Braden never talked about his father.”
Journey in the Dark, Martin Flavin (1944)

5) “The street was darkened by a smoky sunset, and light had not yet come on in the lamps near the empty house.”
In This Our Life, Ellen Glasgow (1942)

6) “Sayward awoke this day with the feeling that something had happened to her.”
The Town, Conrad Richter (1951)

8) “On a January evening of the early seventies, Christine Nilsson was singing in Faust at the Academy of Music in New York.”
The Age of Innocence, Edith Wharton (1921)

The late insurrection in Southampton has greatly excited the public mind and led to a thousand idle, exaggerated and mischievous reports.”
The Confessions of Nat Turner, William Styron (1968)

11) “Sometimes there was a compulsion which drew Ira Claffey from his plantation and sent him to walk the forest.”
Andersonville, MacKinley Kantor (1956)

12) “He was of medium height, somewhat chubby, and good-looking, with curly red hair and an innocent, gay face, more remarkable for a humorous air about the eyes and large mouth than for any strength of chin or nobility of nose.”
The Caine Mutiny, Herman Wouk (1952)

13) “The patient, an old-fashioned man, thought the nurse made a mistake in keeping both of the windows open, and her sprightly disregard of his protests added something to his hatred of her.”
Alice Adams, Booth Tarkington (1922)

14) “The black people who live in the Quarters at Blue Brook Plantation believe they are far the best black people living on the whole Neck, as they call that long, narrow, rich strip of land lying between the sea on one side and the river with its swamps and deserted rice fields on the other.”
Scarlet Sister Mary, Julia Peterkin (1929)

15) “From the small crossed window of his room above the stable in the brickyard, Yakov Bok saw people in their long overcoats running somewhere early that morning, everybody in the same direction.”
The Fixer, Bernard Malamud (1967)

16) “The driver of the wagon swaying through the forest and swamp of the Ohio wilderness was a ragged girl of fourteen.”
Arrowsmith, Sinclair Lewis (1926)

17) “There was a ball in the old Pentland house because for the first time in nearly forty years there was a young girl in the family to be introduced to the polite world of Boston and to the elect who had been asked to come on from New York and Philadelphia.”
Early Autumn, Louis Bromfield (1927)

18) “There was a run-down old toll-bridge station in the Shoestring Valley of southern Oregon where Uncle Preston Shiveley had lived for fifty years, outlasting a wife, two sons, several plagues of grasshoppers, wheat rust, and caterpillars, a couple or three invasions of land-hunting settlers and real estate speculators, and everybody else except the scattering of old pioneers who had cockleburred themselves onto the country at about the same time that he did.”
Honey in the Horn, H.L. Davis (1936)

21) “Grandfather said:  This is the kind of man Boon Hogganbeck was.”
The Reivers, William Faulkner (1963)

22) “When Bob Mumson awoke in his apartment at the Sheraton Park Hotel at seven thirty-one in the morning he had the feeling it would be a bad day.”
Advise and Consent, Allen Drury (1960)