The 2018 Washington Writers Conference is in (and of) the books 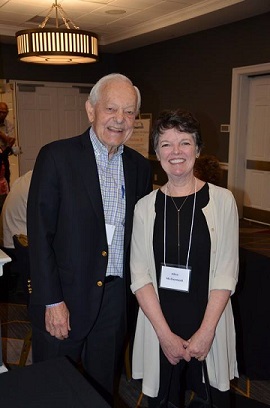 Writers don’t receive thanks very often, but expressing gratitude to them was one of the first things journalist, author, and former CBS News anchor Bob Schieffer said in his keynote speech last Saturday at the 2018 Washington Writers Conference in College Park, Maryland.

“Keep doing what you’re doing,” he told the room of nearly 150 attendees. “As long as we can keep people reading books, it’s a good thing for the country.”

Schieffer’s gracious and entertaining keynote (complete with a surprisingly spot-on impersonation of Henry Kissinger) was just part of a dynamic, jam-packed day for writers that included a warm welcome from the Independent’s president, Salley Shannon; live pitch sessions with more than a dozen agents from across the country; informative craft panels, such as “Writing a Page-Turner” and “Tools of the Trade”; and an intimate conversation between author Alice McDermott and Tayla Burney about McDermott’s latest novel, The Ninth Hour.

McDermott talked about creating a fictional order of nuns for her book because there wasn’t an existing order whose mission served the narrative. She also noted the importance of honoring one’s characters: “You’ve created these characters, of course, but from the first detail you write, a million other options [for how a character would act or react in any given situation] shut down.”

When Burney asked if there were any autobiographical elements in the book, McDermott gave a fascinating answer:

The conference always works to strike a balance among topical subjects, craft panels, and a peek into the business end of writing. Our very first speaker, agent Katharine Sands, gave us that first peek with her early-morning discussion of “Book Promotion for Authors.”

Almost every one of our craft panels strays at some point into a discussion of publishing, while publishing panels end up chatting about craft, and this year was no exception.

Panels included “Women of Crime,” with four accomplished authors proving — as if it were still a question — that women do write crime successfully, and “Through the Wormhole: Debut Sci-Fi Authors Tell All,” that was half-and-half craft and publishing.

Focusing entirely on what it takes to get that debut book published was the panel “There’s Always a First Time: Debut Authors Across Genres and Publishing Paths,” that featured authors of biography, novel, short stories, and journalism/memoir to compare and contrast ways of getting your book out into the world.

Our two topical panels rounded out the conference’s full schedule. The authors on the panel of “Channeling Climate Change: The Tip of the Iceberg,” discussed the very real and verifiable threats we’re facing whether or not people want to acknowledge them.

Immediately following Schieffer’s assessment of our current political climate was the panel “Political Books in the Age of Trump,” in which moderator Margaret Engel spoke with authors John A. Farrell, Laurence Leamer, E.J. Dionne, Jr., and David Litt about the challenges of writing such books in an era not only rife with division but also flooded with what Leamer called “instant books.”

“I tend to be a professional pessimist,” he said, expressing concern that the speed at which books on either side of the divide appear on store shelves today makes it less likely that their authors are engaging in the serious, scholarly research necessary to create truthful, historically accurate works.

The panel as a whole seemed concerned about the increasing trend (among some public figures) of labeling unpleasant truths as “fake news,” and how that trend only seems to be strengthening division among Americans, a sentiment that Schieffer had also expressed earlier in the day in his keynote, which might explain some of his gratitude.

When asked by Shannon how writers should try to continue to function under the constant threat of a “fake news” label, Schieffer advised, “Keep doing what you’re doing,” urging the audience of writers to do their research, confirm their facts, and never give up pursuing truth in their work.

Down the hall from all these illuminating panel discussions was the perpetual-motion machine that is the agent pitch room, which ran a continuous cycle of five-minute pitches throughout the day, with just a break for lunch. The logistics of scheduling three to four pitches each for 150 attendees with 15 agents over seven hours demands a cross between military precision and artful choreography.

One of our returning attendees, Laura Zam, had this to say about her experience:

“The Washington Independent Review of Books’ conference is one of the best literary conferences I've attended. Much of this has to do with the pitch sessions. Everything from signing up with agents to getting actual appointments to queuing up for these appointments was extremely well organized and respectful of writers. The pitch sessions themselves were a delight. Each agent was friendly and deeply invested in finding new voices. I met with four agents, who all requested a proposal! I had a wonderful experience and recommend this conference to writers of all levels.”

From agent pitches to craft lessons, from political books to sci-fi debuts, this year’s Washington Writers Conference truly offered something for everyone.

Panel in the Spotlight: “Thrillers & Horror & Crime: Oh, My!”

And make one of them to attend the Washington Writers Conference!