The meditative wonder of Planting Dandelions 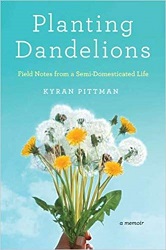 I very much enjoy Lucinda Williams. I would never argue with anyone who said that Creedence Clearwater Revival was the best rock band ever. I also love digging into history and finding the obscure beauties, such as Vee-Jay Records.

And I read a memoir from 2011 recently that rings the same bell: Planting Dandelions by Kyran Pittman. The irony begins with the title. It may not need to be said, but first off, nobody plants dandelions. They grow without any effort.

The subtitle is Field Notes from a Semi-Domesticated Life, announcing to the reader, “I’m going to be studying and reflecting on a half-wild life.” This is exactly the point of view of the open and compassionate anthropologist invested in the small, seemingly simple society she is examining.

(Full disclosure: Kyran Pittman is a not-too-distant relative with whom I became acquainted in the last year. I’ve never met her, but she has assisted in some family history research.)

Pittman lets the reader in on the perspective in the first lines of the intro: “I jumped the white picket fence. Not in the way the story usually begins, with the heroine breaking out, busting loose, setting off across the wild world in search of her authentic, enlightened self. That would be uncharacteristically normal of me. I broke in, not out.”

Now, distilling your entire perspective in this manner is very hard to do. If you take the mental effort to imagine the look of, say the final scene of “The Graduate” in reverse, with Elaine running away from the romantic unknown future, back into the church to get hitched, it’s absurdly shocking.

And it draws me in. What could have happened to cause such a striking scene to occur?

Pittman cultivates an air of sweet and painful mystery in her weedy garden:

“Fifteen years ago I pushed off from a forgotten island at the edge of the continent [Newfoundland] and landed in middle-America. I came to marriage from an adulterous scorched-earth love affair. I went from being a wild-child to being a good mother. I grew up in a home that was free-thinking, free-loving, and free-falling, and willingly entered a life of Cub Scouts on Monday, bills on Tuesday, playgroups on Wednesday, groceries on Thursday, errands on Friday, sex on Saturday, and church on Sunday.”

She examines her new-chosen life in relation to the life she was raised in, the life she fled. She re-examines how her wildness led to her domesticity through the events of that process, and how she is reliving similar conflicts that she witnessed in her parents lives. “Child is the father of the man.”

Her children provoked her to sort through the difficulties of her early life, face them, and then either avoid them with her own children or, at least, acknowledge that she can’t avoid them.

Such is the tentacular capacity of the past, to meld seamlessly into the challenges of the present, and to hold us away from our desired future. The past is very close in the first chapters. Pittman details the somewhat shameful occurrences in her first marriage, as well as her affair with Patrick, and the difficult decision to marry this same man. The irony is why would either of these two people, who have proven unfaithful to her first marriage, trust the other one for a second betrothal? Irony, to expose the folly of morality...

But Pittman no longer wants to dwell on mistakes and wallow in suffering. The opposite occurs, lessons are learned, communicated simply and powerfully in artful chapters arranged around the progression of her domestic world, the marriage, the house, the first birth, the problem of nipples and the hypocrisy of anti-breastfeeding, the playgroups, the part-time job she took to maintain her sanity, the accumulation of friends in her new world, and various other things.

When she discovers she is pregnant with their third child, the pressures of domestic life are ratcheted to new levels:

“We weren’t relating to each other as lovers, or even as friends — only as stereotypes. Patrick was cast in the part of wayward son. Me, the overbearing mother. It was an awful cat-and-mouse game that reinforced us as adversaries with every round.”

If you’ve ever seen your spouse as an adversary, this book will touch you. Pittman has been there and she wants to keep it under control, to recognize that bad things can have power over us only if we allow it.

Strong with irony and love, Pittman breaks through. She’s able to step back and reason about motherhood’s “tremendous force.” She watches her husband recoil from her over her control issues with the children. She sees herself making friends with another father in her circle, taking comfort from him which she wasn’t getting from her husband, whom she was pushing away.

Isn’t that exactly how we are?

“The urge to escape was strong.” The children essentially forced them not to do anything rash, and eventually they sat with a counselor and sorted it all out; objectivity drawn from begrudging and lonely subjectivity.

The solace of “irony with love” for Pittman and Patrick is that, going forward, when there are bad times, they can rejoice in knowing they made it through the last one, that they know what bad times are and how to temper them. In Planting Dandelions, each chapter highlights domestic drama and offers another chance to grow.