An inauspicious start to the new year 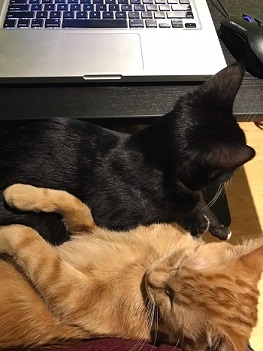 The beginning of a new year is always so full of hope. A blank page, if you will, that’s just waiting to be filled. Unfortunately, this year that page has stayed largely blank.

It’s totally not my fault.

I’m usually a strong starter. So, what’s different about 2018?

Luddite vs. Technology: A number of months ago, I bought a brand-new Mac. My dear husband had to twist my arm a bit. I don’t like to upgrade my technology. Not my car, not my phone, and definitely not my computer. Why fix something that isn’t broken?

Only my Mac wasn’t functioning very well anymore. I’d already worn the letters off of several keys, and I’d upgraded the operating system to as high a level as the machine allowed, which was still several below the current system. It couldn’t run some of my software anymore, and it had several security risks that couldn’t be patched.

It still took me months to finally decide to switch over to my new laptop. It had been with me a long time and been my faithful friend. I felt like I should be playing “Taps” and burying it in my back yard.

After much nagging on my husband’s part, I agreed to switch over to my new one. There are all these ways to move things from one machine to another, but naturally none of them worked. My old Mac was simply too ancient. I spent almost a week trouble shooting, trying technique after technique to move documents, photos, music, and programs from one machine to the other. I think I even invented some creative new curse words in the process.

As of last week, the transfer is complete. So, I should be back on track, right?

Writing vs. Reading: Did you know Mystery Writers of America just released the list of Edgar nominees?

And it’s an awesome group of books this year. Books that pull you into the story, make you appreciate a finely turned phrase and spend lots and lots of hours reading them…instead of writing.

I’ve had friends recommending and raving about certain books on the list. How can I not read them? (That’s a rhetorical question, by the way.)

Even the Independent’s very own E.A. Aymar had urged me just days before the Edgar announcement to read “She Rides Shotgun” by Jordan Harper. Imagine my chagrin when his recommendation ended up being one of the nominees, and for a first novel to boot. Now, I HAVE to read it. (He’s so smug.)

And as if computer problems and good books weren’t enough, I had to choose the nuclear option to blast my productivity out of existence…

Kittens: Yes, you heard me. Kittens. Those adorable time-sucks that make sure my productivity flatlines. I even wear a besotted grin while waving goodbye to my words and long-established work habits. Don’t let their cuteness fool you. Kittens are kryptonite for writers.

And, naturally, one wasn’t enough.

Two of them. A ginger and a tuxedo.

I lobbied to name them Ruckus and Trouble, but my (accurate) suggestions were shut down. You may wonder how kittens destroyed, demolished, flat-out ruined my productivity. I present exhibit A: See that picture at the top of this column? That’s me sitting at my desk. I’m the one under the kitten pile.

Question: How long do you think my arms are?

Hint: Not long enough to reach the keyboard.

Before the kittens (which period shall hereafter be known as BK), I would wake up with the expectation of putting words on the page.

Instead, I spend my day removing kittens from my keyboard, pulling my headphones cord — or really any cord related to my computer — out of their fierce maws, and fighting to keep my fingers on the keys while the evil furballs diligently (I could learn something from them) work toward their nefarious goal…which is obviously to eliminate the source of anything that takes my attention away from them.

5 Gifts for the Writer in Your Life

‘Tis the season, after all